What's on your mind?

Still Oasis (the old one)

Moved to FandomDesktop (one with darktheme option)

Sorry for my poor English. But the Chinese full cover of Darkness of Dragons is totally wrong.

In fact,Chinese cover of book10 used Joy Ang's work as the American one.

Apologies for my grammar or spelling faults

Well, I forgot to add the actual Chinese book10 cover. 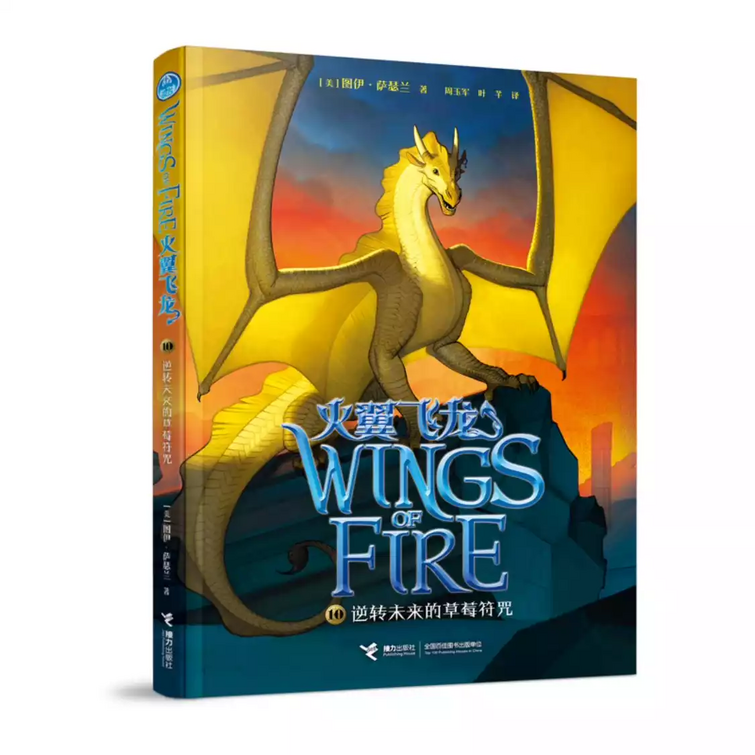 If it fails, I also add a link.

No one cans see names or profile pictures

The wof fandom, as well as a few other fandoms, is having this issue where a lot of peoples’ profiles just become blank and are named “Null”. can someone explain what’s happening because it’s hard to have WOF related discussions with this problem.

What if the wiki makes a category for characters under Othermind Control?

So a few weeks ago I saw a post that now you can only post things related to WoF? I personally don’t think it’ll be fun if we can’t post other things, just random crap we come across and so on. The LGBTQ+ wiki has tons more people, tons more pages, and a few more admins but (for the most part) the posts were okay anyway.

Since I couldn't access Discord for some reason at the moment

For the sake of better organization, should there be a separate label for historical flora/fauna? For example, wolves might have been part of the Lost City of Night's old flora/fauna, but no longer exist there due to most of the present island being in water now. What I'm suggesting is basically a separate label/dropdown in the flora/fauna section that includes all the historical plants and animals that may no longer exist (unless they are mentioned again sometime later in the story, proving that they exist both historically and in the present).

P.S. Really, you shouldn't be giving people labels based on character choices.

P.S.S. People who liked Darkstalker before he started trying to end the world aren't the same as people who still like him.

@Dragonfly Blue I feel like we could add two pages, meme pages (That have to be on-topic) And, welcomings, important announcements, and things like that. Let's say someone wanted to have a break, but they would have to add a wof meme or something, so they would just put it in important announcements and then it wouldn't happen often. Memes are just memes, yep, just wof memes

RainWingsMistakes in the Wings of Fire series

Recently, everyone has been telling people to reply to their post instead of upvoting it. Personally, I prefer upvoting over replying. Upvoting is an easier way to show support. Sometimes I don't have anything I want to say or I'm afraid that my honest opinion might come out as rude. I know many users on this wiki who feel the same way. Please don't pressure others in the way they show support.

I noticed that on Sky’s character page, his relationship section with Snowfall is the exact same as Snowfall’s relationship information with him. Can someone fix that? I know this because it does not show how Sky feels to Snowfall, but how Snowfall feels to him. 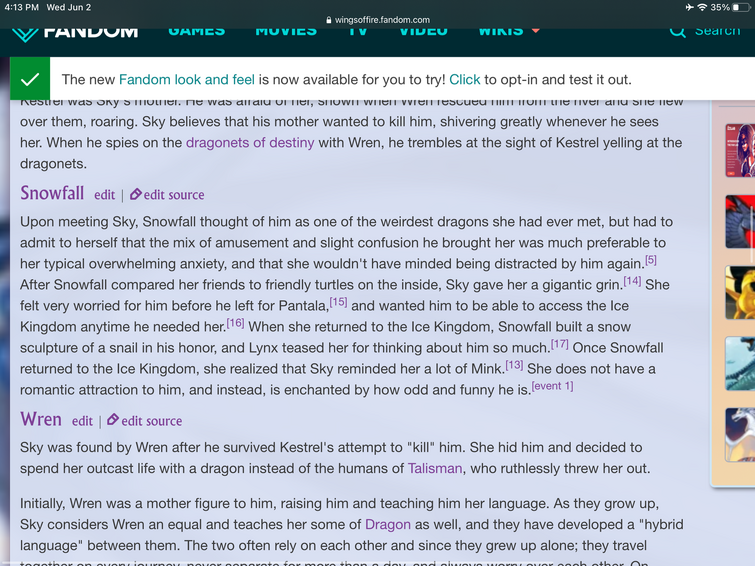 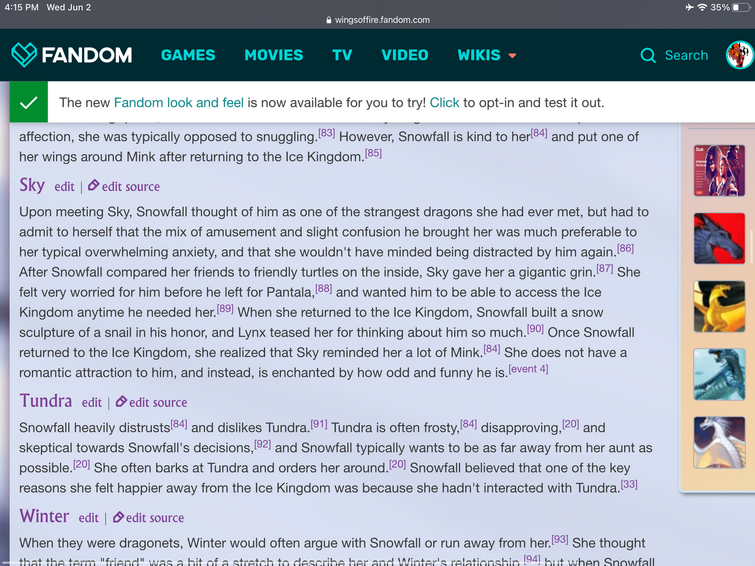 I'm talking about these:

Say the character you want to eliminate in the replies!

Like character creation polls, character elimination posts use up multiple posts and clog the board. What makes them different is that character creation polls are meant to create a character, not to say that they should be unbanned though. Character elimination posts are literally pointless. If someone wanted to find out which characters others liked the most or least, they should make a regular post and start some interesting, constructive discussion instead.

Hello there! I’m opening up my code/thememaking server to the wiki.

This is a server for local coders, and for users who are interested in giving direct feedback on new themes. In fact, I have a theme in progress right now that I need some feedback on!

When you join, you'll have to verify your account through Fandom. Note that swearing is allowed on this server!

To the refmakers: Osprey is described to have so wings, yet his reference shows him with wings. Could someone please fix that? Thanks.

Nearly every roleplay posted on these boards are cookiecutter roleplays, or very common roleplay types that are pretty much clones of each other. Examples of cookiecutter roleplays include prophecies, wars, labs, and especially academies. Academies are SO unoriginal, overdone, and even kinda spammy. Think about this: every academy is just this form:

You have been invited to (insert something) Academy!

This academy is for (hybrids/special power dragons/erase if neither) dragonets!

The plot is (school being attacked/it was a trick/group of special students must save the world/chill).

Have fun, and I'm totally not being lazy!

Regular powerplayers control the actions of other characters, but powerplaying hosts control EVERYTHING. Host powerplaying is a huge issue that has strangely never been addressed. Up until now.

"She blasted fire at him" is not powerplaying, but "She pinned him down" is.

Will the heroes prevail, or will they fail and allow the world to fall into chaos? is not host powerplaying, but Eventually Hero 3 will decide to betray the others and join the dark side because they know the heroes can't win and so the heroes lose is.

In roleplays with powerplaying hosts, all of the participants are the host's puppets. The participants have no freedom at all while the host forces them to type exact replies. If the host wanted the plot to be exactly as they want it to be, they should've wrote a fanfiction instead.

Roleplays with this kind of pain-in-the-tail host are no fun at all. If hosts want as many people as possible to join their roleplay, they should create one that everyone can enjoy. Good roleplays are open-ended and grant participants freedom to shape the plot.

The worst subspecies of powerplaying hosts control not only the plot, but also control the attributes of the characters themselves.

See the difference? In the second example, you can't even choose the name of the newly-crowned queen. As for preset names for already-dead characters, Queen Seastar in this case, the name Seastar is restricted because it's already taken by the host. I've even seen one instance of hosts presetting entire OCs, name, gender, sexuality, personality, and all! (Note that canon charcater roleplays are not host powerplay because canon characters are supposed to have specific attributes.)

Nobody likes spam or powerplaying, including from roleplay hosts. Creating an original roleplay with a unique plot will help it stand out from the low-effort cookiecutter roleplays littering the board. Give the participants freedom to help shape the plot and contribute to the story collaboratively. And for the sake of Clearsight, let the participants choose their OCs' names and attributes at the very least! (Unless you're restricting special powers of course, twenty animi in a single roleplay gets very chaotic very quickly.)

Hi! I had a quick question related to the 'Special Dragons' category under Universe: should dragons with leafspeak become a category within that? It already includes animus dragons, empowered NightWings, and hybrids. I'm (pretty) sure that not all LeafWings have leafspeak, since it's a subcategory of LeafWings that already exists, but should it be listed under there too? I don't know, so let me know what you think below! If I'm wrong, sorry in advance!

Should the article “Dragon royalty” be renamed “Royalty”?

on the topic of 'mods i know youll lock this but' posts.

Stop! thanks in advance <3

the point of the rule is that you dont make off-topic posts. the goal was to decrease the amount of posts we had to deal with and you guys are just. what are you doing, actually?

why do you think you can make a post that blatantly breaks a rule, acknowledge that in the title of the post, and then not get in trouble? why does anyone think thats okay?

i honestly might just delete posts now because you're all using 'lock this post' to send 'im leaving bye :(' messages to the rest of the wiki.

This post is locked.
I think that you should be
able to have a description
for polls
Does anyone agree?