Wings of Fire Wiki
Register
Don't have an account?
Sign In
Advertisement
in: Characters, Males, SilkWings,
and 6 more
English

Admiral, preferring the nickname Ad, is an adult male SilkWing who was introduced in The Lost Continent. He is the father of Luna and Blue, as well as the former partner of both Burnet and Silverspot. He is a flamesilk and was last seen enslaved in the flamesilk factory.

Admiral has shimmering blue-green scales, a hue somewhere between Blue's bright morpho blue and Luna's caterpillar green. His eyes are brown with a faint gold tinge to them, and he has darker purple streaks along his wings and matching spots of white on each one.[1] He is mentioned to be quite skinny.[2]

Admiral is a cheerful, naïve, upbeat, optimistic, happy-go-lucky SilkWing who tries to make the best out of even the worst situations, as he has no problem being held captive in the flamesilk factory. He is a rule-follower and is oblivious to the fact that he is actually a prisoner, believing that he and his coworkers are valuable employees for Queen Wasp, ignoring the power imbalance. However, Admiral isn't completely blind to this situation. He slowly and only semi-successfully attempts to get Wasp to improve the flamesilk factory by regularly sending her lots of letters that she rarely answers. He was also proud to be a father, excited to meet his son for the first time, and looked forward to meeting his daughter when she emerged from the cocoon. Admiral's over-optimism and ignorance of Queen Wasp's indifference towards the flamesilks cause him to overlook and have a biased view against some of the other flamesilks who don't share his optimism about being imprisoned. It is unknown if Admiral's ignorance of being imprisoned is out of stupidity or wishful thinking, as Blue states that the other flamesilks also behave oddly due to being imprisoned for most of their lives.

Admiral loves and cares for both of his dragonets. He welcomed both with open wings and defended them from Fritillary even after knowing their desires for escape. Though Admiral did not seem to understand his children's wishes and possessively wanted to keep them in the factory along with him, he still loves them and tried to keep them away from dragons he sees as potentially harmful (and in this case, Danaid).

Admiral said that Clubtail, Danaid, and Whitespeck are wrong about everything and that he would never work with them.[3]

The flamesilk factory is divided into factions. Danaid is on the opposite one from Admiral, so they have a hostile relationship.[4] They frequently insult each other and are generally toxic towards each other. Admiral calls her dreadful after Blue talks to her.[5]

Fritillary and Admiral strongly dislike each other, and they get into arguments frequently, which annoys the other flamesilks.

The flamesilk factory is guarded by a few HiveWing guards, Sandfly being one of them. They don't seem to have an openly aggressive relationship, but there is a power imbalance because Admiral is being imprisoned by her tribe.

Whitespeck is typically on the opposite side in arguments with Admiral, as are most of the other flamesilks; they are generally toxic towards each other. Admiral called him along with Clubtail and Danaid selfish ignoramuses who are wrong about everything.[3]

"I can't believe one of mine is flamesilk, […] And maybe both! Clubtail was taken out to have eggs a year before me, but neither of his had any flame whatsoever."
― Admiral to Blue, about him and Luna (The Lost Continent, page 237)

"They're letters, […] My copies of them, obviously. I write one to the queen every seven days, outlining the current problems I see and offering proposals for fixing them."
― Admiral to Blue, about his pile of letters (The Lost Continent, page 238)

"That's not true! And it would help if CERTAIN DRAGONS weren't such TROLLS about everything! As IF anyone would EVER believe that LESS citrus might be helpful! I swear, I think he sneaks over and reads my letters just so he can write one arguing for the exact opposite of anything I propose."
― Admiral to Blue, about the other flamesilks and his letters (The Lost Continent, page 242)

"Danaid, stop poisoning my son's mind, he's on my side, not yours."
― Admiral to Danaid about talking to Blue (The Lost Continent, page 253)

"Well, the queen doesn't exactly like to have SilkWings wandering around who know where this cavern is. But tell you what, I'll write her a letter! Or lots of letters! If you're not a flamesilk, I'll think of some very good reasons why you should go home. Don't worry. It might take a while. But then, maybe you'll want to stay? It's quite nice here. And this is where I am."
― Admiral to Blue when he asked what would happen if he wasn't a flamesilk. (The Lost Continent, page 257) 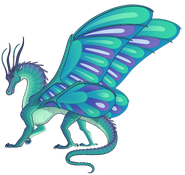