"That's Asha, all right. She was always softhearted and mushy about crazy things. She loved mooning around little dragonets, telling them the story of that prophecy. She left a lot of blithering, obsessed dreamy-eyed dragons behind in this village, let me tell you; they still won't shut up about about destiny and peace and all of that."
—Cattail to Clay about Asha, The Dragonet Prophecy

Asha was a female MudWing and a member of the Talons of Peace. She was Cattail's sister, and therefore also the aunt of Clay and his sibs. Cattail described Asha as very kind, and stated that she told stories about the Dragonet Prophecy to dragonets. Asha died of wounds that she sustained after being caught in the crossfire between Blaze's and Blister's forces while bringing Clay's unhatched egg to the Talons' secret mountain hideout. She ended up successfully delivering the egg to the Talons of Peace, but soon died of her wounds.

Cattail claimed that Asha was "always softhearted and mushy about everything" and that "she left a lot of blithering, obsessed, dreamy-eyed dragons behind in the village". This may suggest that Asha was kindhearted and sensitive, with a lot of faith in the prophecy that she tried to help others see. She was portrayed as gentle and caring, as well as possibly a good parental figure, unlike the rest of the MudWing parents. Clay reflects on how her presence would have improved the dragonets' lives, and how she probably would have taught him more about MudWing customs and traditions.

Asha was a member of the Talons of Peace and the dragon who brought Clay's blood-red egg to them. However, she was badly injured due to being caught in the crossfire of a skirmish between Blister's and Blaze's forces and died of her wounds shortly after arriving at the Talons' secret location under the mountain.

Asha was mentioned by Cattail, her sister, when Cattail was explaining how she sold Clay's egg to her for two cows. Clay realized that having Asha alive and as one of their dragon guardians would have meant that they would've had a kind adult who cared about them and who told Clay about MudWing life, which meant that having Asha in the cave would've improved the lives of the Dragonets of Destiny. Asha also would have known why Clay "attacked" the other eggs when they hatched, eliminating quite a bit of verbal abuse and wrongful expectations from Kestrel in his life. Cattail said that her siblings would be pretty upset at the death of Asha and that it served her right for leaving their bigwings. 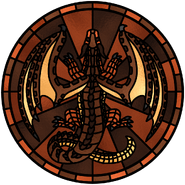 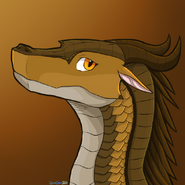 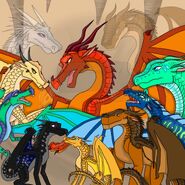 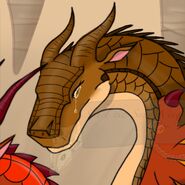 By xTheDragonRebornx and how she imagines Asha 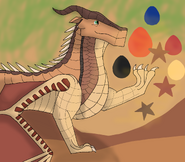 Retrieved from "https://wingsoffire.fandom.com/wiki/Asha?oldid=4638989"
Community content is available under CC-BY-SA unless otherwise noted.