Wings of Fire Wiki
Register
Don't have an account?
Sign In
Advertisement
in: Characters, Females, SilkWings,
and 4 more
English

"Aren't we going to fight them?"
— Atala to Io, The Dangerous Gift

Atala is a female SilkWing who was introduced in The Dangerous Gift. She formerly resided in Yellowjacket Hive and is in a relationship with an unnamed LeafWing.

Atala has scales and wings that are peach-orange with sapphire spots.[1][2] She has a triangle of three letters carved into one of her palms.[3]

A vision in Atala's point of view was the first vision Snowfall received from the gift of vision. Atala was flying with an unnamed LeafWing toward Pyrrhia, terrified. Atala and the LeafWing later appeared again in the crowd of refugee SilkWings, where Snowfall interrogated Lappet about her as to know if she was the SilkWing in her vision. Snowfall saw Atala without her wrist cuff eating dates. Atala hung out with the LeafWing, took naps and stared at the ocean, likely thinking about her family. Later, Snowfall talked about her visions and described Atala as 'one of those sad-snouts.' 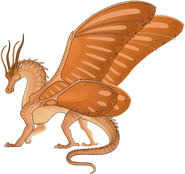