Wings of Fire Wiki
Register
Don't have an account?
Sign In
Advertisement
in: Characters, Females, SeaWings,
and 10 more
English

Auklet is a female SeaWing dragonet who was introduced in The Lost Heir. She is the youngest living daughter of Coral and Gill and currently resides in the Deep Palace.

Auklet has emerald-green scales,[3] dark green eyes,[4] and green wings.[5] Clay stated that she has a snout similar to Tsunami's.[6]

Auklet is playful and mischievous, behaving as most young dragonets do. In Talons of Power, she was seen chasing bubbles in one of the Deep Palace gardens. She is curious, enthusiastic, and energetic.

Auklet's egg was in danger of being destroyed by Orca's statue, but Tsunami volunteered to protect it, risking her life for her little sister. She succeeded and was allowed to name the dragonet Auklet. While Tsunami was in Coral's prison with the other dragonets of destiny, Auklet was fitted for her harness, freeing Anemone from her own harness temporarily. Additionally, Whirlpool raised the possibility of marrying Auklet to become king due to fear of Anemone ending up like Albatross. She was taken to the Deep Palace when Burn's army attacked the Summer Palace.

Auklet appeared briefly with Coral, Anemone, and Turtle waiting outside Jade Mountain Academy. She tugged at her harness and was delighted to see her sister. She said that she wanted to attend school with Anemone and Turtle, but her mother thought she was too young, and her sister Tsunami suggests that maybe she can attend the next year. This quite disgruntled Coral.

In the epilogue, Anemone's mind revealed to Darkstalker that she had enchanted Auklet's harness, which would hopefully help to "keep Queen Coral away" from Anemone for now. If not, she would "come up with something stronger."

When Turtle went to warn Coral about Anemone coming to kill her, he found Auklet with her. She was playing with bubbles in the garden, which was her favorite place in the Deep Palace. Auklet recognized her brother and started bouncing happily. When they were about to leave, she hugged him.

In Coral's letter to Turtle, the queen wrote, "Auklet and I send our love."

Tsunami was the first dragon she saw and seems to like her and her friends, other than sisters.

She seems to love her brother and got excited when she saw him in Talons of Power. She might have wanted to go to Jade Mountain Academy too because he, along with Anemone and Tsunami, was attending the school. 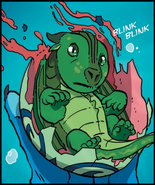