Wings of Fire Wiki
Register
Don't have an account?
Sign In
Advertisement
in: Characters, Females, SkyWings,
and 10 more
English

"What happened to you? Who did this?"
— Avalanche to Flame when she saw his scarred face, The Brightest Night

Avalanche is an adult female SkyWing who was introduced in The Brightest Night. She is a member of the Talons of Peace, and she is currently located north of the Rainforest Kingdom.

Avalanche is larger than Pyrite, with red scales and a bad-tempered expression.[1]

Upon meeting Kinkajou, Moonwatcher, Qibli, and Winter, Avalanche glared at them in a way that made Winter's spine prickle.[1]

It appears that Avalanche has a strong love for Flame, as shown in The Brightest Night. When Flame was handed over to Morrowseer for the prophecy without Avalanche's knowledge or consent, she was so angry she "nearly killed Nautilus." She had him sent him to Jade Mountain Academy so the Talons of Peace would not try to drag him into another, showing her love for him. Based on her hostility towards Qibli in Winter Turning, she also has a strong dislike for SandWings, which may be because her son's facial scar was caused by being scratched by Viper's tail barb, a dislike shared by Flame.

Avalanche appears to both hate and fear Peril, as she was cautious about trying to attack her, as well as trying to prove that the "monster" inside of Peril still exists. It is likely that she resents Peril because of this fear.

Avalanche has a strong love for Flame, her son, as shown by her reaction to him being sent over to Morrowseer and when he returned to her.

It is revealed that Avalanche joined the Talons of Peace in order to save Flame from being drafted in the SkyWing army.

"That looks like Flame, […] But it can't be. What's wrong with his face?"
― upon seeing Flame with his snout scar (The Brightest Night, page 227)

"What happened to you? Who did this?"
― to Flame when she sees his scarred face (The Brightest Night, page 228)

"I've not only heard of you, little monster, […] I was one of the guards sent after your mother when she tried to escape with you."
― to Peril (Escaping Peril, page 62-63)

"My biggest regret, […] is that we didn't kill you then. I don't care that Kestrel got away. But if I'd known Scarlet would keep you alive —"
― to Peril (Escaping Peril, page 63) 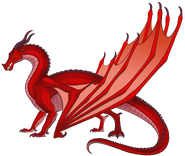