Wings of Fire Wiki
Register
Don't have an account?
Sign In
Advertisement
in: Characters, Females, NightWings,
and 16 more
English

"I will lead my tribe to safety."
— Battlewinner, The Dark Secret

Taken over by her previously internal frostbreath injury

Queen of the NightWings

The Hidden Kingdom,
The Brightest Night

Battlewinner was an adult female NightWing who was introduced in The Dark Secret. Before the NightWing Exodus, she was the queen of the NightWings and was described in A NightWing Guide to the Dragons of Pyrrhia to be "a closely guarded secret." She was the mother of Greatness and froze to death after leaving her lava cauldron in an attempt to attack Glory and Starflight.

Battlewinner had black scales that gleamed like polished ebony and seemed to emit white steam.[1] Her eyes were dark with a glint of icy blue in their depths, and two of her teeth were also pale blue, appearing more like icicles than regular teeth.[1] Her throat and black tongue[2] were lined with pale blue frost, in patterns that glinted and swirled and were feathery or sharp.[2] She had heavy shoulders,[2] a thickset neck, a battle-scarred snout,[1] glistening claws, and a thick head.[3] She was massive, as big as Morrowseer,[3] and had a creaky, quiet, rough, and eerie voice, like claws scraping on ice several caves away,[1] as well as a barking laugh.[4] Whenever she emerged from her cauldron, she glowed horribly, with lava dripping between her scales and claws.[3]

Battlewinner could be considered cunning and manipulative, as she helped create the dragonet prophecy in order to find a new home for the NightWings.[5] She was also shown as cruel when she ordered Vengeance to be thrown into lava for upsetting her. She would have done anything to save the tribe, even if it meant killing all the RainWings and meddling with the prophecy.[4] She was possessive over her throne as she did not want to hand over the NightWings over to Glory, despite it being the only way for the tribe to survive.[6] Battlewinner does not like her orders questioned.[7] She was wrathful, and her punishments were consistently swift and severe.[8]

Greatness was Battlewinner's only daughter and heir to the NightWing throne. Battlewinner wasn't impressed by Greatness, calling her cowardly and a terrible queen. This was true, however, as Greatness was one of the first who fled into the tunnel, ahead of the rest of her tribe.

Morrowseer was Battlewinner's most trusted advisor as shown in The Dark Secret and Assassin. They came up with the dragonet prophecy together. 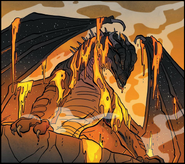