BeetleWings founded Pantala along with the LeafWings and were eventually bred out of existence due to the arrival of Clearsight, splitting into the HiveWings and SilkWings around 4500 AS. They were first mentioned in The Poison Jungle.

BeetleWings were described to have four wings, like that of butterflies, beetles (likely where they got their namesake) or dragonflies. It is possible they had antennae since Cricket mentioned that HiveWings did at one point. BeetleWings likely had bright colors, similar to SilkWings. Only one pure BeetleWing is mentioned in books 1-13 (Sunstreak).

Like their HiveWing descendants, some BeetleWings had insect-like powers. They were rumored as to possibly have antennae in The Lost Continent when Cricket said the HiveWings used to have them. Their ability to shoot venom from their fangs was mentioned. When Princess Tsunami arrived in the Poison Jungle, she heard about these powers and connected them to the RainWing tribe back on Pyrrhia. When Queen Sequoia was telling the Legend of the Hive, it was mentioned they used their flamesilks to burn insects out of the sky.

Though there were only five named BeetleWing individuals (four of them being hybrids), all of them were named after species of butterfly. 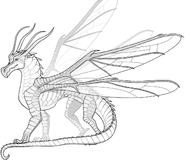 Transparent BeetleWing base by Spirit978 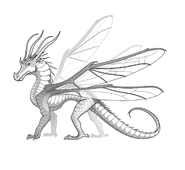 Beetlewing underground by Nectar the Leafwing 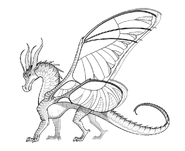 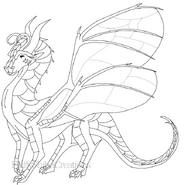 A BeetleWing by Fathoming Death 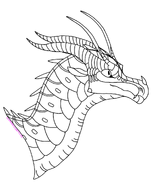 Transparent headshot base by glamoroussneaking
Add a photo to this gallery