Wings of Fire Wiki
Register
Don't have an account?
Sign In
Advertisement
in: Characters, Females, Dragons,
and 20 more
English

"That is mine. I deserve it. I took the rest of the SandWing treasure. I tricked Mother into flying to her death alone. I used my brain to get out of facing Burn in a challenge duel, by turning our fight into a war. I am the smartest dragon in Pyrrhia. I am the rightful SandWing queen."
— Blister to the dragonets of destiny, The Brightest Night

Vaporized by the Eye of Onyx

The Lost Heir,
The Dark Secret,
The Brightest Night

The Lost Heir,
The Dark Secret,
The Brightest Night

Blister was an adult female SandWing who was introduced in The Dragonet Prophecy. She was one of the three rival sisters who fought for the SandWing throne during the War of SandWing Succession, and was considered one of the deadliest and most cunning dragons in Pyrrhia during her lifetime. She was killed by the Eye of Onyx after attempting to steal it from Thorn during The Brightest Night.

She was smaller than Burn, with an eerie stillness about her,[16] like a venomous snake about to strike.[3] She had no scars,[17] but Blister's pitch-dark eyes were similar to theirs.[18] She resembled her brother, Smolder, as they shared the same narrow face, lidded dark eyes, and black scale patterns.[19] Her tail was once described to move across the floor like a snake.[20] She has a forked black tongue,[21] and an aura of menace seemed to surround her.[6]

Glory implied that Blister was one of the scariest dragons in Pyrrhia.[22] She was dry,[23] secretive, planning,[24] unperturbed,[25] clever,[26] hypnotizing,[16] sinister,[27] sly,[28] malevolently scrutinizing,[29] and considered hybrids to be "cross-contamination" within her army.[30] She was secretive,[31] menacing,[13] malevolent,[32] careful,[33] paranoid,[34] calm,[35] glowering,[36] smooth, cold,[37] intelligent, devious,[38] fearless,[39] and had very effective torture methods during the war.[40] She held her chin high,[12] and an aura of menace seemed to surround her; even beside dragons larger than herself, she was the most terrifying dragon present.[12] Her face often concealed her emotions, but strong feelings such as displeasure were sometimes barely hidden.[41] Ostrich mentioned that Blister always looked like she was murdering others with her eyes,[42] and Six-Claws thought that she had an analytic and categorizing mind.[7] She could hold a conversation, but often made other dragons feel uneasy within her presence.[43] She often used flattery to gain the trust of others.[28] Tsunami believed that Blister would happily kill off her own dragonets if she thought was necessary.[24]

Blister did not have a good relationship with her older sister and was an enemy during the war. Blister knew that she would not win against Burn in a regular challenge for the throne, so she used two dragonbite vipers as her weapons instead. Despite this, she liked Burn much more than Blaze.

While Coral smiled at[44] and referred to Blister as her friend, Blister quickly removed herself from Coral's physical affections,[43] and referred to her as "Coral," while the SeaWing queen always referred to her ally as "Queen Blister." Tsunami disliked the way that they acted towards one another,[45] and Blister was willing to use false affection towards Coral to manipulate her feelings and decisions.[5] She was disrespectful towards Coral[46] and could not care less what happened to Coral's daughters,[15] and seemed slightly bored when discussing ways to save the lives of Coral's future dragonets.[47]

As the NightWings were secretly allied with Blister, she often confided with Morrowseer about plans to take the throne. They were on good terms and exchanged many sinister ideas. Sometimes, Blister could become frustrated at Morrowseer for not coming to meetings on time and choosing the meeting place, only to arrive late.

Blister did not have a good relationship with her mother, as Oasis knew that she was a threat. Oasis suspected that she would be the one to try for the throne the moment she hatched.

"I like that. A traitor in their midst. Tear them apart from the inside. My kind of plan."
― to Morrowseer about Starflight and the dragonets of destiny (The Dragonet Prophecy, epilogue)

"Not a problem. What's one more dead dragon here or there on my way to the throne?"
― to Morrowseer (The Dragonet Prophecy, epilogue)

"I'm sure you've heard things about me, too. But you can't always trust rumors and propaganda, especially when it comes to a big responsibility like the prophecy. So ask me anything you like. I'd be delighted to help you make your decision — although of course I hope you'll choose me."
― to the dragonets of destiny (The Lost Heir, page 192)

"Forgive her, Coral. It can be very shocking, seeing a dead body of a dragon you know. Especially when you've probably wanted to slash her throat yourself once or twice — right, Tsunami? I know I felt that way about my mother most of the time."
― to Coral, about Tsunami forgetting to tell her who Kestrel was (The Lost Heir, page 202)

"Don't you have one more question for them? Why they killed all of your heirs. I mean, obviously it was them, right? Working together. It's the perfect climax to the story. Just like one of your brilliant mysteries. The Claws of Murder, for instance. Or A Tail of Blood. That one was genius. It was so that Tsunami could return as the only living heir, of course. If they killed off all the other possible heirs, she would become more and more valuable. A bargaining chip if they ever needed it. A powerful tool when they wanted to use her."
― to Coral about Riptide and Webs (The Lost Heir, page 224-225)

"For now, I'm finally just one step away from the throne that is rightfully mine. And that step, of course, is killing you."
― to Blaze (The Brightest Night, page 285)

"How interesting. I wonder if anyone involved would consider it. Peace by negotiation. How... undragonly."
― to Gill (Assassin)

"SandWings, search the island. Thoroughly. Turn over every log; climb every tree; wade into every pool. Find the dragon who did this. It will be a SkyWing, or an IceWing, or one of my sisters' SandWings — any SandWing who doesn't belong here. When you find that dragon, bring it to me, and I will kill it, and then we can move on from this foolish distraction."
― to her soldiers (Assassin) 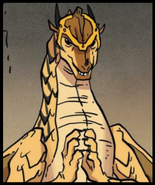