Wings of Fire Wiki
Register
Don't have an account?
Sign In
Advertisement
in: Characters, Males, Dragons,
and 5 more
English

"His name's Bombardier. But he's awful, so there's not much different between regular him and brain-dead him. He thinks I'm in love with him, if you've ever wondered what the most enormous arrogance looks like. I guess I'd still save him, but maybe, like, last."
— Cricket to Blue about Bombardier, The Lost Continent

Bombardier is a male HiveWing dragonet who was introduced in The Lost Continent. He is currently attending Terrarium Academy.

Bombardier has jet-black scales and flecks of red along his ears, wings, and claws.[1]

Cricket describes Bombardier to be intensely arrogant, awful, smug, and immensely annoying. According to Cricket, Bombardier believes that she is in love with him, although she is not, and openly says she isn't.[2] Because of this, he constantly tries to 'let her down gently.' She describes Bombardier as the complete opposite of Blue, and that he is uninteresting.[3]

"You don't need to act self-confident with me, it won't make me like you more, Cricket. I keep telling you, I'm not interested in you that way."
― to Cricket (The Hive Queen, page 61) 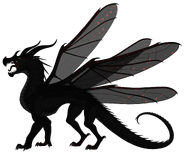