Wings of Fire Wiki
Register
Don't have an account?
Sign In
Advertisement
in: Characters, Females, RainWings,
and 6 more
English

"My student Kinkajou ran off during a venom training session and hasn't come back. I want the blame lifted from me so I can go back to my regular life."
— Bromeliad to Magnificent about Kinkajou's disappearance, The Hidden Kingdom

Bromeliad is an adult female RainWing who was introduced in The Hidden Kingdom. She currently lives in the Rainforest Kingdom as a venom trainer for RainWing dragonets.

Bromeliad typically has dark burgundy scales and scarlet flickers in her ruff.[1]

Bromeliad is often irritable and grumpy,[2] unlike typical RainWings. She tends to take her assigned students into a hidden or discreet part of the rainforest, so no one can hear her yelling at them whenever she gets frustrated.[3] Bromeliad seems to be selfish, as she was more focused on getting her assignment back than returning Kinkajou to the village.[4]

Bromeliad reported Kinkajou was missing after losing her during a practice session of venom targeting. She complained to Magnificent that it wasn't her fault that the RainWing dragonet had run off "to spite me," and asked for her job back. Magnificent allowed Bromeliad to be cleared of her charges and continue her assignment. Later, Bromeliad claimed that Kinkajou was spreading lies about being a NightWing prisoner on their island. She was shown to be extremely harsh, grumpy, and intolerant towards Kinkajou's knack for being talkative, disliking her and thinking she was very annoying. During the RainWing Royal Challenge, Glory briefly considered Bromeliad as part of her team before dismissing the thought.

Bromeliad appeared as a guard when the Jade Winglet visited the rainforest. She scolded Kinkajou for running off from school, and later returned to the RainWing village to report to Queen Glory of their appearance, and seemed to be as moody as ever.

Bromeliad was mentioned by Kinkajou when she was mumbling in her sleep.

Bromeliad is constantly annoyed with Kinkajou, describing her as a "terrible student" and "a pain in the tail." She claimed that Kinkajou ran off to spite her even though she was gone for weeks.[5][6] She said that Kinkajou was "no one's favorite dragon"[7] and told Glory that she would either fail school or run off.[8]

"A dragonet, […] Everyone thinks I lost her while we were venom training, but I know it wasn't my fault."
― about Kinkajou disappearing and her being suspended (The Hidden Kingdom, page 60)

"I don't know. Maybe she ran off. She's a terrible student and a pain in the tail. I just want to be cleared so I can have my assignment back."
― to Glory about Kinkajou and her suspension (The Hidden Kingdom, page 61)

"She'll show up eventually."
― to Glory about Kinkajou being missing (The Hidden Kingdom, page 61)

"My student Kinkajou ran off during a venom training session and hasn't come back. I want the blame lifted from me so I can go back to my regular life."
― to Magnificent (The Hidden Kingdom, page 63)

"About eighteen days, […] She's no one's favorite dragonet, I might add."
― telling Magnificent how long she's been suspended from teaching (The Hidden Kingdom, page 63)

"What are you doing here? […] You were supposed to stay at that school the queen sent you to! I told her you were a terrible student and would definitely fail or run off, but would she listen? Mysteriously not! And now here you are, so I suppose I was right!"
― after finding Kinkajou and her friends in the rainforest (Winter Turning, page 38) 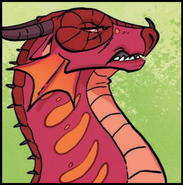