Wings of Fire Wiki
Register
Don't have an account?
Sign In
Advertisement
in: Characters, Females, Dragons,
and 6 more
English

The Poison Jungle,
The Dangerous Gift

Bumblebee is a female HiveWing dragonet who was introduced in The Hive Queen. Since her egg was only injected once with the breath of evil, she is most likely immune to the othermind's mind control. She currently resides within Sanctuary.

Bumblebee has black scales that are striped with wide, fuzzy swathes of bright yellow[1] and yellow-and-black-striped wings.[2] She has patches of black scales circling her yellow-gold eyes, making her look like a tragic panda. She has a rather round face,[3] as well as a very loud, high-pitched voice.[4] She is roughly the size of a large mango.[5] She has big, black-rimmed eyes in a warm golden face, as well as thin, shimmering wings.[6]

Being a young dragonet, Bumblebee is squirmy,[7] very demanding, and loves to eat. She is extremely talkative and very loud, often babbling to herself or others even when they are shown irritated of her hyperactivity. She proves herself to be a good listener when she and Sundew get trapped in a large sundew plant, following the instructions to escape from being eaten. The small HiveWing is noted to be very smart and a fast learner, and frequently finds more and more ways to communicate with grown dragons.

Bumblebee has a positive relationship with Blue. When Bumblebee hatched, Blue was extremely excited to raise her. He is almost like an adoptive father towards Bumblebee and is shown carrying and holding Bumblebee in a scarf sling tied around his chest.

Bumblebee adores Cricket, as Cricket is almost like an adoptive mother towards her. Cricket is also the dragon who saved her egg from Queen Wasp's mind control by taking her from her Nest. She carried Bumblebee all the way to Wasp Hive in a scarf sling tied around her chest while they destroyed Queen Wasp's supply of mind-controlling plants. Cricket acts motherly towards her, praising her when she correctly followed Sundew's directions, calling her a "good listener", "such a smart dragon," and talking to her like a mother would to her child. Cricket also once stated that Bumblebee did not have to be mean and scary, unlike the other mind-controlled HiveWings. When she sought comfort after being chided by Snowfall, she buried her face into Cricket's shoulder.[6]

Bumblebee is in friendly terms with Daffodil, as she let Daffodil play with her.

Bumblebee has a special fondness of Sundew and looks up to her greatly, which started as the result of Sundew giving her food. After Sundew gave a dried mango to the newborn dragonet to keep her still, she was mentioned to "give Sundew a worshipful look."[8] Bumblebee calls Sundew "Snudoo." In The Poison Jungle, Sundew begins to show affection towards Bumblebee, willingly holding her and giving her food. When Sundew was in the SapWing village, Sundew was wondering if anyone had fed Bumblebee.

Bumblebee seems to think that Swordtail is funny. When he told her to be quiet, she fell over giggling. More of this relationship is seen in The Poison Jungle. When she said "Snabble poof," she was likely referring to Swordtail disappearing in the Venus dragon-trap.

Bumblebee appears to dislike Tsunami, as evidenced by her not wanting to stay with her in The Poison Jungle.

"Snabble poof!"
― reacting to Swordtail being eaten by a dragon-trap (The Poison Jungle, page 14)

"Meh meh meh meh meh."
― Bumblebee mocking Nettle after she complains about not being in charge (The Poison Jungle, page 157)

"Ha HA! Beebuf! I sabladay! Me mish! Yim yim yim!"
― Her bragging about knowing the color blue and listening to Sundew, and saving the day (The Poison Jungle, page 186)

"GROWLFACE! ARGNORAW RGUMPHLE!"
― Bumblebee yelling at Tsunami when being forced to stay with her (The Poison Jungle, page 244) 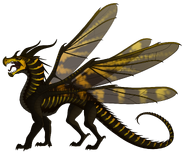 Bumblebee on the cover of the Official Wings of Fire Coloring Book, by Brianna C. Walsh