Wings of Fire Wiki
Register
Don't have an account?
Sign In
Advertisement
in: Characters, HiveWings, Females,
and 6 more
English

"Across the continent still isn't far enough from you horrible grubs, but it'll have to do."
— about Cricket and Katydid, The Hive Queen

Cadelle is an adult female HiveWing who was introduced in The Hive Queen. She is the grandmother of Cricket, and the mother of Katydid. She divorced with Katydid's father, leaving Cricket and Katydid to grow up in Cicada Hive without her. Cadelle was last seen residing in Jewel Hive.

Cadelle has scales the color of tangerines, with black triangle patterns zigzagging along her spine and out to the edges of her wings.[1]

Scarab says that Cadelle's personality is like sandpaper.[2] She is shown to be irritable, ill-tempered, and cruel, once biting a SilkWing servant with her venomous teeth for burning her favorite food.[3] She dislikes both Katydid and Cricket, Cricket especially, and views her job, teaching history at Jewel Hive University, as a waste of time. She is perpetually trying to climb the social ladder, and after she demands the Book of Clearsight, Cricket accuses her of giving the book to Queen Wasp in exchange for a party invitation. She also likes silence. She hates ugliness, such as the water tower in Jewel Hive.

Cadelle was mentioned when Cricket told Blue about her "mother."

Cadelle is first shown in Cricket's flashback, disturbing Cricket as she is hiding in a cupboard reading a book on architecture. However, Cricket went unnoticed as Cadelle was under Queen Wasp's control at the time.

In the years between, Cadelle was shown to have gotten divorced, moved to Jewel Hive, and became a history teacher. Cadelle views her job as a waste of time.

When Cricket passes by Cadelle's square, she sees her coming out of the house and hurrying towards an avenue. Later, Katydid tells Cricket that Cadelle is not her mother. This greatly frustrates Cricket, to the point where she does not bother to watch when Swordtail reports how Cadelle sailed off with another dragon by Dragonfly Square.

Later on in the book, it is revealed that Cadelle is not Cricket's mother, but is in fact her grandmother who reluctantly took the dragonet in when her real mother, Katydid, tried to hide the fact that she had an egg.

Upon trying to put up poster copies of Wasp over the Hive, Cricket accidentally crashes upon Cadelle. Cadelle is enraged and drags Cricket into her house, threatening her and demanding for the Book of Clearsight, which Cricket refuse to do. As they argue, Wasp abruptly takes over Cadelle and chases after her. Cadelle is part of the mob of HiveWings who captured Cricket and left her in prison.

In Cadelle's eyes, Cricket represented danger, crime, disorder, and lies that could ruin Cadelle's life if Queen Wasp found out who Cricket's biological parents were. This is most likely the reason Cadelle left Cicada Hive, to escape Cricket, the risks, and Wasp's potential wrath. She was angry when she caught Cricket in The Hive Queen on her way to the water tower to hide, hissing, "I didn't want anyone to know I had anything to do with you. And you show up here?" Most of Cadelle's hatred of Cricket is motivated by fear of the secrets, lies, and the queen's fury.

Katydid is Cadelle's daughter, but she does not seem particularly motherly to her. She acts distant and bitter towards Katydid. However, she treated Katydid better than she did to Cricket, as shown when Cadelle would take Katydid to dinner and leave Cricket at home.

Katydid's Father is Cadelle's partner, but there seems to be a sour, slightly bitter relationship between Cadelle and the latter. This is possible because of the lies and disorder associated with Cricket's hatching that caused the two to despise not only Cricket but each other after a period of time. When Cadelle moved out to Jewel Hive to escape Cricket and Katydid, she also divorced Katydid's Father and is no longer his partner.

"You. What are you doing here? In my Hive? Are you trying to get me arrested?"
― to Cricket when she accidentally crashed into Cadelle (The Hive Queen, page 206)

"I kept my mouth shut. I didn't want anyone to know I had anything to do with you. And then you show up here? Did you think I would help you?"
― to Cricket (The Hive Queen, page 207)

"You could give me the Book. I am actually qualified enough to know what to do with it. It shouldn't be in the talons of some grubby SilkWings."
― to Cricket (The Hive Queen, page 209) 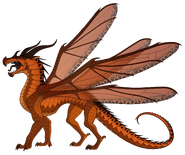