Wings of Fire Wiki
Register
Don't have an account?
Sign In
Advertisement
in: Characters, Females, SkyWings,
and 11 more
English

"I'm a loyal subject of Queen Ruby. I'm in the camp that believes Scarlet is dead, and if she isn't, I'd be happy to kill her to protect my queen's throne. I'm here because my queen told me to be, although I should be training with my battalion and guarding her palace, not eating wet fish with a bunch of spineless dragonets. And my favorite color is red."
— Carnelian introducing herself, Moon Rising

Around 6 or 7 years at death

Killed in the history cave explosion

Carnelian was a female SkyWing who was introduced in Moon Rising. A former soldier under Ruby in the War of SandWing Succession, she later attended Jade Mountain Academy as a member of the Jade Winglet. She was unintentionally killed by a dragonflame cactus explosion caused by Sora soon after arriving at the academy.

Carnelian preferred combat and was disinterested in education and making friends, and she saw school as a punishment rather than a reward.[4] She did not like other dragons, specifically those from other tribes and rarely interacted with them positively, Umber being an outlier because their tribes were allied in the war.[5] She would look down on others by judging them and evaluating their worth based on their battle prowess.[6][7] Carnelian was violent and aggressive, as she got into a fight on her first day of school.[8][9] Her dreams were often "belligerent and blood-soaked"[10] and seemed to have involved war and enemy soldiers.[11][12] She often wished that Queen Ruby would let her drop out of Jade Mountain Academy and send her back to the SkyWing army,[13][14] since she wanted to become a general and protect the palace. Carnelian was incredibly loyal to the queen and stated she would kill Scarlet herself in order to protect the throne.[15] Despite her harsh exterior, deep down Carnelian was truly insecure. She worried everyone else would think that she was dumb and that her chance at meeting her life goals would be ruined.[16]

She was one of the few dragonets who was not afraid of Peril when she showed up at the academy, instead wondering if she remembered her from the Sky Kingdom.[17]

Carnelian was extremely loyal to Queen Ruby and even said she would kill Scarlet herself to protect her queen's throne. Moon saw from reading Qibli's observant mind that Carnelian was secretly worried that Ruby and the others would think she was dumb, and all of her hopes of advancing to General would be ruined.[15]

Carnelian detested Scarlet and believed her to be dead. However, if she found out that Scarlet was alive, she was willing to kill the ex-Queen herself in order to protect Ruby.[15]

"I've faced bigger SeaWings than him in battle if he's trying to start something!"
― thoughts on Pike (Moon Rising, page 20)

"I might literally die of joy."
― sarcastic comment after Kinkajou proposed they hang paintings in their sleeping cave (Moon Rising, page 24)

"I'm a warrior. […] A loyal soldier in Ruby's army, who never did anything to deserve this … this punishment of schooling and being forced to live with Ditzy and Mumbles over there."
― thinking about school, Kinkajou and Moonwatcher respectively (Moon Rising, page 25)

"I have fought in fourteen battles! No one giggles at me! Least of all a RainWing who can't even read and knows nothing about war!"
― to Kinkajou after she giggles at her (Moon Rising, page 26)

"I'm a loyal subject of Queen Ruby. I'm in the camp that believes Queen Scarlet is dead, and if she isn't, I'd be happy to kill her to protect my queen's throne. I'm here because my queen told me to be, although I should be training with my battalion and guarding her palace, not eating wet fish with a bunch of spineless dragonets. And my favorite color is red."
― when asked to introduce herself by Tsunami (Moon Rising, page 81)

"Where SkyWings and MudWings were on the same side, […] Maybe I do have allies here."
― thoughts about Umber (Moon Rising, page 84)

"I'm with igloo-face, […] If we're supposed to get all snuggly with each other, there shouldn't be any more secrets. Let's make her tell us everything."
― to the Jade Winglet about Moonwatcher, agreeing with Winter (Moon Rising, page 91)

"She won't hurt me. I wonder if she remembers me."
― thinking about Peril (Moon Rising, page 133)

"You're an idiot, SandWing. It's perfectly fine in there."
― to Qibli, her last words before being killed by a dragonflame cactus explosion (Moon Rising, page 175) 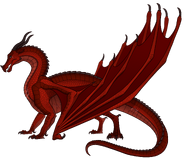 Reference by Sands of Lost Time