Wings of Fire Wiki
Register
Don't have an account?
Sign In
in: Characters, Females, MudWings,
and 8 more
English

"We sold it to the Talons of Peace, […] Does this mean they want the cows back? Because they can't have them. I know we were supposed to breed them, but we ate them, so too bad."
— Cattail to Clay, The Dragonet Prophecy

Alive (as of The Dragonet Prophecy)

The Hidden Kingdom,
The Dark Secret

Cattail is an adult female MudWing who was introduced in The Dragonet Prophecy. She currently resides in the Mud Kingdom as a soldier under Queen Moorhen.

Cattail is thin, with brown scales and wings that have dappled patterns of paler brown scales on them.[1] She has brown eyes like Clay's, with a ring of yellow around the black slit of a pupil,[2] and her laughter is a high croaking sound like a thousand bullfrogs yelling at once.[3]

Not much is shown of her personality, but it can be inferred that she is lazy, careless, and irresponsible. She was quite unconcerned about selling Clay when he was an egg and did not seem to care for him when they reunited in The Dragonet Prophecy; and though he said she wasn't trying to be mean, it was still clear that she did not want him and did not consider any of his shocked feelings.

Cattail seems to have cared about her sister, having been distraught after learning that Asha had died shortly after delivering Clay's egg and saying that their bigwings would be furious. Despite this, she also commented that her sister had been "softhearted and mushy about crazy things," and had loved to preach about the prophecy and peace to the other dragons of their village. Cattail remarked that "She left a lot of blithering, dreamy-eyed dragons behind in this village." After finding out that Asha had died, Cattail had also told Clay and Glory that it "served her right" for choosing the Talons of Peace over her own kin.

Though Clay, while growing up under the mountain, had many fantasies about his mother and father who he hoped had cared about him and been frantic when his egg was "stolen," Cattail, like many MudWing mothers, didn't seem to particularly care about her dragonets, and didn't even know who their father was. She sold Clay's egg to the Talons of Peace for a couple of cows, later telling Clay "There were six other eggs in the hatching. They didn't need you."

"Oh, that egg, […] Asha got all excited about that. Don't know why; the village has a red egg every few years or so. But I didn't lose it."
― to Clay about his blood red egg (The Dragonet Prophecy, page 283)

"We sold it to the Talons of Peace, […] Does this mean they want the cows back? Because they can't have them. I know we were supposed to breed them, but we ate them, so too bad."
― about Clay's egg (The Dragonet Prophecy, page 283)

"That's Asha, all right, […] She was always softhearted and mushy about crazy things. She loved mooning around little dragonets, telling the story of that prophecy. She left a lot of blithering, obsessed dreamy-eyed dragons behind in this village, let me tell you; they still won't shut up about destiny and peace and all that."
― about her sister Asha (The Dragonet Prophecy, page 284)

"Hee! Snorf! You don't know anything about MudWings, do you? Your father doesn't care. I don't even know who he is. The tribe has breeding nights once a month, nothing more."
― to Clay when he asks who his father is (The Dragonet Prophecy (graphic novel), page 200)

"You tell the Talons, we made a deal! They can't have those cows back! Because we ate them…"
― when Clay and Glory were leaving (The Dragonet Prophecy (graphic novel), page 201) 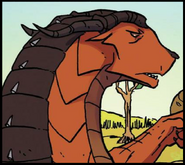