Wings of Fire Wiki
Register
Don't have an account?
Sign In
Advertisement
in: Characters, Males, HiveWings,
and 3 more
English

"My lady, I quite insist. We do not serve second class dragons before royalty in this establishment."
— Chafer to Scarab, The Lost Continent

Salesdragon at The Sugar Dream in Cicada Hive

Chafer is an adult male HiveWing who was introduced in The Lost Continent. He is the owner of The Sugar Dream.

Chafer has a long red tail.[1] His voice oozes,[2] simultaneously oily and tense.[3]

As soon as Blue and Luna entered The Sugar Dream, Chafer stiffened and flicked his tail disapprovingly, his brows arching as high as they could, suggesting that he did not like SilkWings.[1] He was rude[4] and sniffy[2] towards them, twitching his snout at Luna as if she were an actual moth he had found nibbling on one of his rugs.[3] Chafer's discrimination against SilkWings can further be proven when he served the HiveWing customers first even though Luna and Blue were first in line.[2]

Chafer appeared when Blue and Luna entered The Sugar Dream. As soon as they came in, he stiffened and was rude towards them in an attempt to drive them away. He stated that he was currently serving another customer, Scarab, and would not help them until she was finished shopping. However, once Weevil and another HiveWing came in, he did not hesitate to take their order. After the HiveWings left the shop, Luna asked Chafer if they could then have their honey drops. He refused again, saying that Scarab was still not finished, until Scarab insisted that they be served first. After he protested, Scarab used her odorous HiveWing powers and insisted again, causing Chafer to quickly give them their honey drops. After Luna asked how much they owed him, he simply begged them to leave, although Luna left a pair of scales on the counter before darting for the door.

"Who's your mistress? Is she new to this hive? She should know that shopping for luxury items is not a task traditionally entrusted to servants."
― to Luna and Blue (The Lost Continent, page 20)

"My lady, I quite insist. We do not serve second class dragons before royalty in this establishment."
― to Scarab (The Lost Continent, page 25)

"My lady! Please don't! I'll have to close my shop for the rest of the day! This isn't necessary!"
― to Scarab, about her HiveWing odor emission (The Lost Continent, page 25) 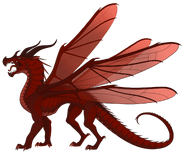