Wings of Fire Wiki
Register
Don't have an account?
Sign In
Advertisement
in: Characters, Males, RainWings,
and 16 more
English

"Chameleon. Some dragons might say that was a cruel irony, while others, for instance an entire tribe of RainWings, might laugh and laugh for days once everyone realizes that the dragon named 'Chameleon' is the only one in the rainforest who can't change his scales."
— Chameleon to Peril, Escaping Peril

Unknown (as of Darkness of Dragons)

Chameleon is an adult male RainWing who was introduced in Escaping Peril. He hatched with an incurable snout deformity that disallowed him to sleep for more than an hour at a time, inhibiting the RainWing ability to change scale colors.

After being banished from the Rainforest Kingdom, Chameleon found Darkstalker's scroll. Using its magic, Chameleon created new physical forms: Bog the MudWing, Cirrus the IceWing, Shapeshifter the NightWing, and Soar the SkyWing. He possesses a different shape for every dragon tribe of Pyrrhia.

After the events of Escaping Peril and Darkness of Dragons, Chameleon no longer owns Darkstalker's scroll or the scraps of parchment that allow him to transform into his other forms. His current location and status is unknown.

Chameleon has scales that are lime and yellowish-green, the color of jungle parakeets.[1] He is skinny, with narrow shoulders,[1] a deformed snout,[2] and several rings around his claws.[3] He is much scrawnier and less intimidating in comparison to his other shapes.[4]

Bog has mud-brown scales[5] and is almost completely covered in different kinds of jewelry: gold chains around his neck that dangle from an elaborate ruby-encrusted headpiece clashing with the rows of silver, emerald, and topaz earrings in each ear; silver chain mail studded with sapphires on his chest; golden silk veils wreathing his wings;[6] giant bejeweled rings on his talons;[7] and a gold tail band shaped to look like dragon claws clutching every inch of his tail, each claw tipped with a sapphire.[6] He also wears a pouch tied firmly under one of his wings where he keeps his pieces of Darkstalker's scroll.[8]

Cirrus has silvery-white scales and wings[9] and pale purple underscales.[10] His eyes are cold and snakelike,[10] and he has a voice like icicles dripping.[11] He is quite a bit bigger than Winter and fiercely thin, with claws that look even sharper than normal IceWing claws.[12]

Shapeshifter has black scales[13] and narrow black eyes.[14] He is quite large,[15][16] with sharp talons.[13] He wears a mess of dark jewelry and compact iron boxes on chains,[17] including a case holding Darkstalker's talisman around his chest.[18] He has extra strength, extraordinarily hot fire, and invulnerable scales.[19] He wears three bracelets, a ring, an a couple of necklaces.[19]

Soar has warm[20] golden-orange scales,[21] orange wings,[22] and amber eyes.[20] He has no visible scars, long horns with faint golden markings on them,[20] and a deeper, stronger voice than that of Chameleon.[3] He also looks wealthier than the average SkyWing: he wears gold rings on three of his claws, a black necklace with gold spikes circling his throat, and an armband weaving like a snake all the way up one of his forelegs, with tiny rubies glittering like eyes at one end.[20] He has a black metal sheath fitted tightly across his chest with a padlock on the outside,[20] containing a small pouch full of coins or jewelry, and a piece of Darkstalker's scroll wrapped in black leather binding.[23] He is large[21] and strong-looking.[24]

Chameleon was a lot grumpier than other RainWings.[25] One of the RainWing healers said that he was horrible and that they would wake up from suntime to find Chameleon just staring at them, as he rather hated other RainWings.[2] Scarlet described him as strange and unreliable.[26] He has a fierce anger in his eyes, and is aggressively protective towards his animus-touched shapes.[8]

Chameleon is shown to be practically obsessed with treasure, working in great lengths to supply himself with the most riches, even working with dangerous leaders like Vulture and ex-Queen Scarlet. When he met Peril, he was said to be surprised and even supposedly happy to meet his daughter. In the end, it was shown that he is very selfish, greedy, and deceiving, working for Scarlet so he could acquire treasure as payment for his services.

Despite this, Peril believed that Chameleon had a part of him that wanted to accept her as part of a family.[27][28] He is often angry[29] and avaricious,[30] unable to resist the lure of any treasure.[4]

Kestrel was Chameleon's partner when he was in his SkyWing form, Soar. They had an egg containing twins, but never saw each other again afterwards. They seemed to have a neutral relationship.

Peril is his daughter. They initially had a good relationship, but as she learned more about Chameleon's actions — hurting Kinkajou and enchanting her to forget about Clay and be completely loyal to Queen Scarlet — the relationship between the two of them deteriorated. However, she still let him keep his shapes after she took Darkstalker's scroll and believed how he just wanted family. She has not seen him since Escaping Peril. Chameleon believes that Peril betrayed him, and while he is willing to admit that he also betrayed her, he thinks that she does not want to see him again.[30]

Chameleon appeared to be taking care of Pyrite while they were with the Talons of Peace, mainly to ensure that the mask remained on Hailstorm.

Chameleon originally worked for Scarlet, casting spells on her command with Darkstalker's scroll in return for payments of treasure. Scarlet seemed to dislike him sometimes because he annoyed her slightly. Chameleon did not care about anything but the payment, so he did not really mind.

"Wait. […] No, no, no. Not SORE. SOAR, S-O-A-R, like flying high over the kingdom. Oh, good grief. Have other dragons been thinking my name is Sore all these years?"
― to Peril when they first met (Escaping Peril, page 141)

"I know what you mean. You can do and say everything exactly the same as everyone else, but if there's one thing different about you, that's all that they care about."
― to Peril (Escaping Peril, page 142)

"My daughter is powerful and amazing and terrifying. Who wouldn't be proud of that?"
― to Peril (Escaping Peril, page 145)

"Hey, she pays very well. At least, she used to. I've had more treasure than any RainWing in the history of Pyrrhia for years now. The last several months haven't been quite the same, though."
― to Peril, about Scarlet (Escaping Peril, page 154)

"Don't listen to those [SkyWings]. You're the second in command of this place. I wish I had that much power in my tribe. I'd have made everybody regret every moment of disrespect, every mocking laugh and disgusted whisper."
― to Peril (Escaping Peril, page 205)

"Ha. As long as you aren't too different, sure. But I had one problem the tribe couldn't understand: I can't change my scales. You saw my RainWing color. When I'm a RainWing, I'm stuck that way. That same green all the time — no camouflage, no flamboyant emotional outbursts, no self-absorbed displays of clever special effects. I could never play their little RainWing games. The healers guessed that it was because of my sleep problem — as myself, I can never sleep for longer than a few minutes at a time, an hour at most. They thought it affected my scale-shifting abilities. But knowing that didn't help. Everyone still teased me… and then whispered about me … and then avoided me. Finally the queen banished me, saying I was making everyone uncomfortable, and perhaps there was a better tribe for me outside the rainforest somewhere."
― to Peril (Escaping Peril, page 206)

"It's the strongest magic in the world. I've never read the whole thing … But then, I only had to read the beginning to realize what it could do."
― to Peril, about Darkstalker's Scroll (Escaping Peril, page 210)

"If Scarlet knew I had unlimited power, she'd make me do much more terrible things than anything I've done so far. I'm not an evil dragon, Peril… I'm not going to give anyone all this power, especially not Queen Scarlet."
― to Peril (Escaping Peril, page 211-212)

"I have a very nice life, though. And so can you, once this kingdom is all sorted out. We'll be her right-claw dragons, and we'll be together. Maybe you can help me come up with clever uses for the scroll. It'll be nice to have family at last."
― to Peril (Escaping Peril, page 212)

"But it's mine. I found it, I get to keep it. Why should you have it? What makes you all any better than me?"
― to Moonwatcher, Peril, Qibli, and Winter (Escaping Peril, page 262)

"Haven't you ruined my life enough? Aren't there actual bad guys you could go harass?"
― to Qibli (Darkness of Dragons, page 122)

"You can't do this to me! I'm nothing without my shapes! You can't leave me as a useless RainWing! Where am I supposed to go?"
― to Kinkajou and Qibli (Darkness of Dragons, page 231) 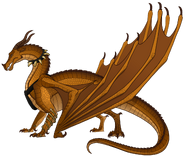