Wings of Fire Wiki
Register
Don't have an account?
Sign In
Advertisement
in: Characters, Females, SilkWings,
and 6 more
English

"Stop, Io. Stop worrying. We got everyone out of Mantis Hive and safely into hiding. We'll save the SilkWings here, too."
— Cinnabar to Io, The Dangerous Gift

Member of the Chrysalis in Jewel Hive,

Cinnabar is a female SilkWing who was introduced in The Hive Queen. She is a member of the Jewel Hive Chrysalis and works as a cook for Lady Jewel. She is currently working with Io to save the remaining SilkWings who are not under control of the othermind after the events of The Poison Jungle.

Cinnabar has burnt, dark[1] orange scales with glints of dark red under her wings and along her spine, making her look almost like a HiveWing.[2] She has dark orange claws[3] and is rather small.[4][1]

Cinnabar's actions show that she is a kind and outspoken SilkWing. She thinks, unlike Morpho, that they could get the HiveWings to join them if they could think for themselves. She is shown to disapprove of Tau and Treehopper's relationship, but it may be because she does not want the Chrysalis to be discovered by Queen Wasp. Cinnabar is relatively sympathetic, as shown when she said that the HiveWings might join them if they were not controlled by Wasp, and she is also open to new ideas.

Cinnabar was a part of the Jewel Hive Chrysalis. She first appeared when Cricket, Blue, Sundew, and Swordtail hid in the Jewel Hive library. When Queen Wasp came, mind-controlling a HiveWing soldier, she eventually exposed herself along with Tau and apologizing for sneaking out to read in the library to cover. When Wasp persisted that she saw blue wings, Cinnabar explained that it was her cousin Morpho who had come to scold the two and had just left; she also added that it may have been the blankets they were using. She and Tau were then taken away to be "punished" by Lady Jewel. Later, when Cricket used the flamesilk, she and Tau helped Cricket up into the kitchen. She explained to Cricket that whenever Wasp ordered Lady Jewel to punish them, she gave them a medal instead.

Cinnabar was seen with Io briefly in the SapWing throne room when they were getting ready to depart for the Distant Kingdoms. She immediately decided to stay with Io to save and help the unaffected SilkWings left on Pantala.

Cinnabar was mentioned in one of the visions Snowfall saw through the gift of vision. She was talking to Tau about the war and worrying that she would get hurt with her damaged wing.

Cinnabar later appears in another of Snowfall's visions, talking to Io and reassuring her that the SilkWings will be safe. She and Io then travel to Cicada Hive to rescue the trapped SilkWings.

Cinnabar is reassuring towards Io, and they are physically affectionate.[5]

Cinnabar cares a lot for Tau, and wants her to stay safe. They are quite physically affectionate.[6]

"No! We need every dragon we can get on our side! I'd rather have fifty SilkWings who are at least trying to do the right thing than three who are perfect in every way by your standards."
― to Morpho about recruiting for the Chrysalis (The Hive Queen, page 136)

"It's just a rumor. I heard it from a SilkWing who heard it from his cousin who heard it from a traveling theater performer. The whisper is that there's a home for old dragons in Tsetse Hive, where none of them are allowed to leave ever because the queen can't mind-control them."
― to Cricket about there being more uncontrollable HiveWings (The Hive Queen, page 145)

"That's true, […] Even in the kitchen we can tell; it's nonstop sugar orders all day."
― to Swordtail about Lady Jewel getting annoyed when Queen Wasp mind-controls her Hive. (The Hive Queen, page 146)

"Oh, wow. You actually shut Morpho up for a moment. You can definitely be in my Chrysalis."
― to Cricket when she got Morpho to stop talking (The Hive Queen, page 147)

"To be fair, […] we haven't exactly done much at the last few meetings. Or ever. Actually ever. I mean, how can seven dragons change anything? We know there are more SilkWings in other Hives who want to fight back, too. But it's just … everyone's busy with their lives and no one knows what to do and, I don't know, it's overwhelming."
― to Sundew about the Chrysalis (The Hive Queen, page 154)

"I'm sorry, Tau. We talked about this. You knew if there was fighting, you wouldn't be able to join us. It would be too dangerous for you."
― to Tau about the Chrysalis' fight against the HiveWings (The Dangerous Gift, page 119)

"Stop, Io. Stop worrying. We got everyone out of Mantis Hive and safely into hiding. We'll save the SilkWings here, too."
― to Io (The Dangerous Gift, page 196)

"Even if that's true, they can't have put all the SilkWings in the Hive under the mind control yet. They don't have enough of the plant to do that. They'll have to grow more, and Sundew said that without Hawthorn or her, it'll take a while."
― to Io about the othermind (The Dangerous Gift, page 196) 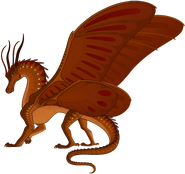