"I'd like to be something more than alive. I'd like to be the kind of dragon she doesn't think I am — the kind they write prophecies about. That dragon who would save her no matter how awful she is."
—Clay to Glory and Tsunami about saving Kestrel, The Dragonet Prophecy

The Lost Heir,
The Hidden Kingdom,
The Dark Secret,
The Brightest Night

The Lost Heir,
The Hidden Kingdom,
The Dark Secret

Clay is an adult male MudWing and the main protagonist of The Dragonet Prophecy.[1] Formerly a dragonet of destiny, he is partly responsible for the end of the War of SandWing Succession and the founding of Jade Mountain Academy.

He also has fire-resistant,[13] mud-brown scales.[14] They are warm[15] browns in the shades of[16] rich mahogany[17] and tree bark,[18] along with undertones of glowing amber,[19] and gold glinting between and beneath his scales.[16] His scales are identical to the color of Wren's eyes.[18]

On his right thigh, he has a scar[26] from a dragonbite viper bite.[27] He also has a deep bite wound in one of his forelegs from the battle at Jade Mountain.[28]

Clay is a friendly, strong, empathetic, protective, loving, caring, courageous, and extremely hungry dragon. He is committed to helping his friends and family, protecting them and keeping them safe at all costs. He is seen as a bigwings by most of his friends due to his selflessness, protectiveness, and kindness. He is willing to give anyone the benefit of the doubt, but he will stand up for himself and his loved ones at all costs, even willing to guard them with his own life. He is loyal to a fault, displayed when he refused to leave Glory with Kestrel in The Dragonet Prophecy. According to Webs, he would do anything to the other four dragonets of destiny. He is honest, kind, open, a bit daft, and would never intentionally hurt someone's feelings.

Clay also loves feasting and food in general (like most of the MudWings, as seen by Ochre), a fact of which Sunny takes full advantage of and regularly teases him about it, often calling him "adorable." Clay appears to have a liking for larger, more meaty meals. This is shown many times throughout the first arc; cows are one of his favorite meals, as shown in The Dragonet Prophecy, and in other instances, it's shown that he likes to eat meat more than vegetables or fruits.

He seems to be skilled in first aid and medical knowledge as shown in The Lost Heir and Moon Rising, and he teaches healing at Jade Mountain Academy.

As with the other dragonets, Clay considers Starflight a brother. He took the dragonbite viper bite meant for Starflight and shielded him when the volcano of the NightWing Fortress exploded. Although Clay gets bored of Starflight's lectures sometimes, he cares about him quite a lot, so much that he would risk his life to keep him safe. Starflight sees Clay as his bigwings, as the rest of the dragonets do. All in all, Starflight and Clay have a good relationship.

Tsunami is among Clay's closest friends. She found and cured him when Clay was drenched in the white ooze in the underground river and his scales were burning with pain. Also, she stabbed Scarlet's tail with a sword to allow herself and Clay to fly away from the SkyWing queen. Later, she calls Clay a "handsome idiot" and gives him a hint that Peril likes him, though it goes right over his head because Clay is not the sharpest knife in the drawer. Throughout the book, Tsunami often interjects when Clay talks about Glory and Sunny in front of Peril because she appears to understand that Peril gets jealous. After she and Clay escape from under the mountain, Clay notices how beautiful and shiny her scales were in full moonlight (he says that they looked like emeralds). In The Lost Heir, she states she had feelings for Clay and Starflight but had gotten over her crush when she realized Clay thought of her as a sister and that Starflight was "too annoying." She was also the second one to hatch, and the first egg Clay tried to help with hatching.

Sunny is like a little sister to Clay, and he treats her as such. When Clay decided to travel down the river under the mountain, Sunny said, "Don't you dare die!" Clay also wanted to go save Sunny when she was trapped in a cage in the Sky Kingdom as soon as he learned where she was, after badgering Peril for the information. When Sunny wants to explain her idea about the darts in the RainWings' attack, she turns to Clay because she thinks he will listen. He seems to be the dragonet she confides in the most. Clay takes a poisonous viper bite to save Sunny's life and says he would do it over and over again if he could. He is one of the only dragons to take Sunny seriously, as shown when Clay paid attention to the "weird crab" Sunny found.

Glory is also one of Clay's close friends. He describes her as "smart and beautiful," and feels bad about thinking that Glory was asleep when she was displayed as "artwork." It is mentioned that Clay would often give her some gifts. When Glory comes into view after Kestrel says she's going to kill her, Clay twines his tail with hers. When Glory goes missing, Clay is very worried about her (and goes to save her). In Escaping Peril, he was devastated when he believed she'd been killed by Scarlet.

Clay befriended Peril while trapped in the SkyWing arena by Queen Scarlet. They became friends quickly and Peril developed feelings for him because he was the only dragon that liked her the way she was. After Clay fights Fjord, Peril brings hot mud to treat his scratches and wounds. He soon finds out that Scarlet ordered Peril not to talk to him, but she defies those orders. Peril seemed jealous of Clay's other friends because she wanted Clay to herself; when she helps the dragonets escape and later betrays them, Clay touches her and discovers that he's immune to her firescales. This helps when he fights Peril against his will in the arena, leaving Peril to admit that she wanted to save him after Kestrel and for him to like her more than the other dragonets. Clay says he does not want to hurt her, but Peril says they have to fight.

Their fight ends after Queen Scarlet is sprayed with Glory's venom, and they escape in the ensuing chaos. Glory says Peril might be the missing SkyWing, but that is proved false. Peril chose to stay behind and distract the other SkyWings from the escaping dragonets, where she states that's all she's good for. But then Clay delivers the award-winning line when he finally gets it, saying that it's not all she's good for and giving her a dragon equivalent of a hug. Peril leaves but sees the dragonets again in The Brightest Night and Moon Rising. Peril saves Clay's life in the fifth book by burning out the dragonbite viper's venom in his thigh. In the sixth book, he invites her to the Jade Mountain Academy. In Talons of Power, Qibli tells Peril that Clay likes her but just doesn't know what to do about it, most likely reflecting on his situation with Moon. In Darkness of Dragons, Peril and Clay go flying together. In this scene, Clay likely reciprocates Peril's feelings for him. Clay sees the good in Peril even when she herself does not.

Clay has 6 siblings: Reed, Marsh, Crane, Pheasant, Sora, and Umber. He met them all (except Crane) when Clay and Glory - who was disguised as a MudWing - went to go meet his mother. Crane had died in the sibling's first battle, between Burn's and Blaze's forces, before Clay came back. If his egg was not taken by the Talons of Peace, Clay would have been the troop's bigwings. In Clay's absence, Reed became the bigwings. He did ask if Clay wanted to be their bigwings, but Clay turned Reed's offer down, knowing that Reed would do a much better job, having grown up with MudWings and having the complete trust and loyalty of all their siblings. When Starflight used his dreamvisitor, he saw Clay dream about his siblings. Starflight said that Clay's siblings were, "More dragons we have to save in this war." Clay seemed shocked and saddened when Sora set a dragonflame cactus off in the school.

Clay cares about the students at Jade Mountain Academy and their safety. He is regarded as a hero among them due to his limp caused by his wound from the dragonbite viper. He is good at defusing arguments between students and is shown to take their suggestions, such as when Tamarin and Peregrine suggest herbs and healing class. He has also claimed that he tries to write as little as possible, due to him not being very good at spelling, as he mentioned to Peril in Darkness of Dragons.

"I'd like to be something more than alive. I'd like to be the kind of dragon she doesn't think I am - the kind they write prophecies about. That dragon would rescue her no matter how awful she is."
― to Peril, about saving Kestrel (The Dragonet Prophecy, page 241)

"With a feast![…] There was a feast at the end of the story! When the missing SeaWing princess got home, her parents were so happy they made a feast! I remember the feast. They ate a whole whale. I bet I could eat a whole whale. Do you think we'll get a feast?"
― to the dragonets of destiny about The Missing Princess (The Lost Heir, page 5)

"I like it, […] Of course, it's much nicer to be this high when your wings are free. But at least the SkyWings gave us a pig sometimes. Do you have pigs? Octopi would be alright if you don't. Or squid. Or manatees. I could go for a manatee right now. Or a whale. I'm not fussy, is what I'm saying. Say, how did you make this big thing? Did it take forever to build?"
― to Riptide, about the SkyWing pillars and Summer Palace (The Lost Heir, page 73)

"I'm awake, […] I'm just waiting until Glory and Tsunami stop fighting. I was dreaming about sheep and buffalo and bears. They were all on the table in front of me and I had to decide which to eat first. Oh, and they all smelled like melons. That part was kind of weird."
― to Sunny (The Hidden Kingdom, page 51)

"I'd die to save you and Starflight over and over if I had to."
― to Sunny after saving her, Fatespeaker, and Starflight from the dragonbite viper. (The Brightest Night, page 280)

"Well, I know what I want my destiny to be. I want it to be sleeping and being friends with you guys forever. Oh wait, also feasting! Lots of feasting."
― to the dragonets of destiny (The Brightest Night, Epilogue, page 308)

"CHICKENS, GIVE UP! WE'RE GOING TO EAT YOU! THERE'S NOTHING YOU CAN DO ABOUT IT! STOP RUNNING AWAY NOW!"
― to the chickens in the Prey Center (Moon Rising, page 36)

"This is a school, you know. Sunny and I thought perhaps an entire cave full of sharp objects might not be the best idea. We thought, maybe, hey, something that locks instead."
― to Qibli, about Jade Mountain Academy's weapons box (Darkness of Dragons, page 56)

Clay on the cover of The Dragonet Prophecy, by Joy Ang

Clay on the full cover of The Dragonet Prophecy, by Joy Ang 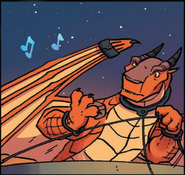 Clay from The Dragonet Prophecy (graphic novel), by Mike Holmes

Clay on the German cover of The Dragonet Prophecy, by Max Meinzold
Add a photo to this gallery

Retrieved from "https://wingsoffire.fandom.com/wiki/Clay?oldid=7314936"
Community content is available under CC-BY-SA unless otherwise noted.