Wings of Fire Wiki
Register
Don't have an account?
Sign In
Advertisement
in: Characters, Males, SkyWings,
and 7 more
English

"Mommy says I'm special. Everyone say it. I be number one most beautiful singer in Pyrrhia one day! Friends with every dragon in the whole world! Mommy thinks I can do anything and great things and all things!"
— Cliff to Peril, Escaping Peril

Alive (as of Escaping Peril)

Cliff is a male SkyWing dragonet prince who was introduced in Escaping Peril. He currently lives in the SkyWing palace and is well-known throughout the Sky Kingdom for singing and songwriting.

Cliff is less than a year old and is small, with dark red scales and a long neck.[1] He was by far one of the smallest dragonets that Peril had ever been close to.[2] He has huge, golden-orange eyes that are almost the color of goldfish, and according to Peril they are prettier than Scarlet's yellow eyes.[3]

Cliff is very self-centered as a young prince, and has a passion for singing and songwriting. This attitude may have been created or heavily influenced by his mother, as she tells him that he is amazing at everything and loves him dearly. He seems to care deeply about his mother, thinks great things of her, and obeys her orders relatively well,[4] most of the time with an immense amount of enthusiasm. He often praises her ability and kindness towards her subjects and becomes upset with those who oppose her. In Escaping Peril, he shows his SkyWing pride by composing a song, which includes a few lines about his mother and how she is a "better queen than all the rest."[5] He appears to be very bright and a quick learner as well. When he grows up, he hopes to be a great singer and "friends with every dragon in Pyrrhia," summing up the majority of his personality. As an enthusiastic, confident SkyWing prince, he hates being called ordinary, and he thinks being lonely would be better than being ordinary, the opposite of Peril's view on the subject.[6] He is clever, as shown when he outwits Scarlet.[7]

Though she was at first his captor, Peril and Cliff seem to have a friendly relationship. Cliff did not show much fear towards her, instead seeming to enjoy her company. He sang a song to her, which he named We the Dragons of the Sky, and seemed to enjoy talking to her. Cliff was delighted when he and Peril saved the day together. His mother may owe Peril her and her son's life. From their conversations, Peril and Cliff seem to share a close bond.

Ruby is Cliff's mother. Scarlet said that Ruby lit up for the first time when Cliff was hatched, leading us to think that she cares very much about her young son and that the day he was hatched was one of, if not the happiest, days of her life. Ruby is clearly devoted to her dragonet, as she was willing to give up her throne if it meant he would live despite his protests. Ruby would likely not be able to live with herself if something happened to him. When Ruby returned to being Tourmaline, she seemed distressed and upset when Cliff did not recognize or accept her as his mother. This played a role in why Tourmaline chose to return to being Ruby. Ruby and Cliff clearly care very deeply about each other; while the queen was being taken off by her soldiers, she told Cliff to be brave and that he would change the world. Cliff has an immense amount of faith in his mother, and she tells him that he will do extraordinary things so often that Cliff did not believe Scarlet when she said he would not. She praises her son for his singing, loving him, and reminding him that he is special. The two have a close bond in which Ruby would do anything for him, while Cliff is immensely proud of his mother's accomplishments and defends her. Cliff looks up to Ruby as the best queen in the world and would probably do anything to appease her.

Though they are related through blood, Cliff did not appear to be on the best of terms with his grandmother. He knows Scarlet is mean. This can be seen by the fact that Cliff loudly encourages his mother to kill his grandmother when Ruby and Scarlet faced off against each other.[8] Scarlet describes Cliff as "There were no sparks. But then she saw you, and suddenly, there were sparks." Which, for the first time in a long time, it was a reaction she did not understand at all, and she compared Ruby's delight to the feeling of a dragon who has just received a treasure. Scarlet did not see this expression, or "spark," as love. Cliff was delighted when Ruby killed her.

"WHAT? […] Mommy says I'm special. Everyone say it. I be number one most beautiful singer in Pyrrhia one day! Friends with every dragon in the whole world! Mommy thinks I can do anything and great things and all things!"
― to Peril, about Ruby (Escaping Peril, page 189–190)

"Where's Mommy? […] You said you not a bad guy. You said that! Where did you put her? I want Mommy back!"
― to Peril when Ruby turned back into Tourmaline (Escaping Peril, page 239)

"Yormorbleflorp!"
― to Leaf, about the key (Dragonslayer, page 291) 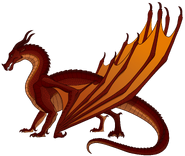 Reference by Your smol local fren