Wings of Fire Wiki
Register
Don't have an account?
Sign In
Advertisement
in: Characters, Females, MudWings,
and 10 more
English

"Of course I am. Who knew that infiltrating the Talons of Peace would be so useful? I never thought I'd get the chance to follow an idiot SeaWing back to the secret palace we've been searching for all this time. [...] Plus, bonus dragonets of destiny. I am so getting a promotion."
— Crocodile to Webs, The Lost Heir

Shot in the eyes with Glory's venom

Crocodile was an adult female MudWing who was introduced in The Lost Heir. Although she was thought to be a member of the Talons of Peace, she served under Burn as a spy and revealed the location of the Summer Palace to the SkyWings. She was killed by Glory's venom during the bombing of the Summer Palace.

Crocodile was large,[1] with brown scales[2] and wings.[1] She had a horrible scar pulling down one corner of her mouth into a strange grimace.[1]

Crocodile was one of the newest members of the Talons of Peace, who confronted Webs about the missing dragonets. She saved him from being mauled by Cirrus by fighting him, as well as other Talons of Peace members to gain his trust in the prologue of the book. Once Webs was safe, Crocodile suggested that he should go back to the Kingdom of the Sea, where Coral would presumably forgive him, and how it might be the only way for him to be safe.

Crocodile is mentioned by Starflight after Sunny says Webs still mumbled in his sleep about leading the SkyWings to the Summer Palace, which Starflight responds to saying it was not his fault and he did not know Crocodile was following him. It leads Glory to think about how she used her RainWing venom on Crocodile, and remembering the flash of fear on the MudWing's face.

When Mastermind showed Starflight his RainWing venom studies, Starflight thought back to the dragons he had seen it kill, Crocodile and Fjord.

"You should go home. From what I hear, Queen Coral is in a merciful mood these days."
― to Webs (The Lost Heir, prologue)

"You might be surprised. Isn't she supposed to be one of the greatest queens in history? That's what all the SeaWing scrolls say. Perhaps she'll forgive you. Why not take the chance, if it means you can go home again?"
― to Webs about Coral (The Lost Heir, prologue)

"Of course I am. Who knew that infiltrating the Talons of Peace would be so useful? I never thought I'd get the chance to follow an idiot SeaWing back to the secret palace we've been searching for all this time. Plus, bonus dragonets of destiny. I am so getting a promotion."
― to Webs (The Lost Heir, page 276)

"Poor Webs. So wrong in so many ways. These are the brats the Talons are so obsessed with? Scrawny. But the SkyWings want you back anyway. For the next queen to play with, I assume."
― to Webs and the dragonets of destiny (The Lost Heir, page 279)

"[Webs is] a cowardly, sentimental old SeaWing. He misses home. I told him Queen Coral is in a forgiving mood."
― to a SkyWing soldier (The Lost Heir (graphic novel), page 21) 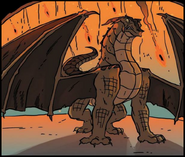