Wings of Fire Wiki
Register
Don't have an account?
Sign In
Advertisement
in: Characters, Females, SilkWings,
and 4 more
English

"Hello, dear. I'm Danaid. Aren't you a shiny one. We haven't had visitors in so long — and now we'll have two new flamesilks. How delightful."
— Danaid to Blue, The Lost Continent

Danaid is an elderly female SilkWing who was introduced in The Lost Continent. She is one of ten flamesilks who were imprisoned by Queen Wasp and was last seen enslaved in the flamesilk factory.

Danaid has scales so orange that she almost looks like a HiveWing, except for the flecks of white dotted along her spine and the long streaks of white along her wings.[1] Blue thought that she looked so old, she could be his great-grandmother.[1]

Blue considers her a dragon worth knowing, as she is well-rounded and friendly. She was kind to Blue and Luna upon their arrival at the flamesilk factory, and appears to be considerate toward both friends and new dragons. However, she has a negative relationship with almost all of her fellow flamesilks, especially Admiral and Fritillary. She is shown to be curious, promptly asking Blue what he was doing when he returned from the hole that Cricket, Sundew, and Swordtail spoke to him through. She catches on quickly, too, starting an argument as a distraction for Blue and Luna when they escape, stopping Admiral from foiling their plan. Danaid's fellow flamesilks seem to think poorly of her as much as she does of them. She seems to have a positive reaction to the shouting matches in the flamesilk cavern.

"Hello, dear. I'm Danaid. Aren't you a shiny one. We haven't had visitors in so long — and now we'll have two new flamesilks. How delightful."
― to Blue, introducing herself (The Lost Continent, page 251)

"I'm sure you'll be delightful company. Better than all these grousing old dragons anyhow. Some of them can't keep a secret. And SOME of them think VERY highly of themselves."
― to Blue (The Lost Continent, page 251-252)

"Well, I don't like them anymore! I think they make him look skinny and arrogant and potato-brained!"
― to Pierid about Fritillary (The Lost Continent, page 252)

"Go suck a lime! I hope your face gets eaten by dung beetles!"
― to Fritillary (The Lost Continent, page 252)

"Who's arguing? […] Was it old Fritillary? He's the worst. Don't talk to him. Xenica is terrible, too, always gossiping and bad-mouthing everyone. You already know you can't trust Pierid over here. […] Clubtail is perfectly nice, but by all the Hives, he never stops talking. Heliconian ruins everything. […] Really, I'm the only one worth knowing."
― to Blue, about the other flamesilks (The Lost Continent, page 253)

"Stop annoying the guards! They don't want to hear your thoughts on potassium at this hour! Or ever!"
― to Admiral (The Lost Continent, page 273)

"I'm not sure my old heart could stand running for my life. But if you find a more sedate way to get us out of here, come back for me."
― to Blue about escaping the flamesilk factory (The Lost Continent, page 275) 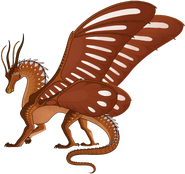