The Diamond Spray Delta is a delta located at the end of the Diamond Spray River, on the east coast of Pyrrhia and the border of the Sky Kingdom and the Mud Kingdom. It was first mentioned by Kestrel in The Dragonet Prophecy.

According to Kestrel, the Diamond Spray Delta is where the lowest-born MudWings live.[1] The delta has lots of mud puddles and sleephouses for the MudWing troops. Sleephouses are tall, dry mud structures that the dragons sleep in.[2] The Delta splits up the Diamond Spray River and lets it out into the sea near the Kingdom of the Sea. The territory is part of the Mud Kingdom and the temperature and the weather are quite humid due to the moisture in the air coming from the Diamond Spray Delta.[citation needed] It is overall similar to the Mud Kingdom in terms of climate.

One part of the Diamond Spray Delta has a forest that crowded up to the ocean, leaving only a strip of pebbled beach populated by seagulls and seals.[3]

In terms of geography, it is northwest of the Mud Kingdom, southeast of the Sky Kingdom, and southwest of the Kingdom of the Sea. The Delta itself is the border between the Mud Kingdom and the Sky Kingdom. The Delta also has a fast current as it empties into the ocean.[citation needed] At the coast of the Delta, the water flows in between large island rocks most likely split from the continent by the water eroding them. The river pushes the water south-east to form the Delta.

Clay and his siblings' eggs were laid in the delta by Cattail. Clay's egg was bought by his aunt, Asha, for two cows in order to fulfill the Dragonet Prophecy requirement of one blood-red MudWing egg. She got the egg but was caught between Blister and Blaze's forces and later died of her injuries after bringing the egg to the Talons of Peace.

Kestrel was attempting to escape the Sky Kingdom with her two newly hatched dragonets, Peril and Sky, but was captured by Queen Scarlet before she could escape. Scarlet ordered her to kill one of the dragonets, and she would spare Kestrel and the other dragonet's life in return. Kestrel pretended to kill Peril's brother, Sky, and the queen went back on her word and ordered her troops to kill Peril and imprison Kestrel. Kestrel attempted to escape with Peril, who burned her in the process and was dropped by Kestrel because her talons were badly burned. Peril was taken back to the Sky Kingdom and became the queen's champion while Kestrel joined the Talons of Peace.

After escaping Queen Scarlet, the dragonets flew over the Diamond Spray Delta on their way to the Kingdom of the Sea after passing the site of a battle between the IceWings and MudWings, which had been littered with dead dragons. The battlefield had a waterfall that was muddy and dark with spilled blood, the ground was also churned up with bones ground into it, and broken dragon wings sticking out, described as looking like tree branches smashed in a storm. The SkyWings were supposed to come help, but Scarlet decided that since it was her hatching day, festivities took priority over wars. Clay, along with Glory, travelled into a nearby MudWing village to learn about Clay's parents and ended up meeting his mom, Cattail, and siblings Reed, Marsh, Umber, Sora, and Pheasant.

Wren and Sky once travelled to the Diamond Spray Delta, where Sky learned how to fly.

Deathbringer and Quickstrike briefly stopped at the Delta during their assassination attempt. 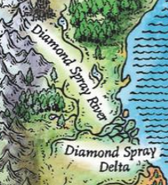 The Diamond Spray Delta on the colored map of Pyrrhia, by Mike Schley