The ten dragon tribes from Pyrrhia and Pantala are ruled by Dragon Queens. Only their daughters, sisters, nieces, granddaughters, or great-granddaughters can serve as potential successors to the throne, with the exceptions of RainWings, MudWings, and occasionally SandWings. Since the MudWings have a leader in the group of siblings, called the "bigwings", all sisters are loyal to her and will not challenge her for queenship as they are too loyal to their siblings.

In almost all dragon tribes, for a princess or other royal female to become queen, they must challenge the current queen to a battle to the death. Whoever wins the battle will then take (or keep) the title of queen.

Another way is for the queen to die of some other cause such as sickness (Queen Glacier), being murdered (Queen Lagoon), or in an accident (Queen Oasis). If a queen was to die without being killed in a challenge the oldest daughter would usually become the new queen.

The RainWings have devised a way to select their queen that doesn't involve violence and killing due to their pacifist, peaceful nature. They partake in a group of activities or games that involve activities that the current queen(s) wish(es) to compete in. These include flower hunts, fruit gathering, tree gliding, scale camouflage, and venom targeting. The dragon to win the majority will become queen, as seen with Queen Glory and her royal challenge.

The method the NightWings use to choose a queen is presumably like most other tribes, although this is not known for certain, as the books claim that the NightWings's queen system is top secret, and do not build on the information there. It is possible they had a method slightly different than the other tribes.

For the SandWings, whoever obtains and is accepted by the Eye of Onyx is the next queen of the tribe, regardless of bloodline (see Queen Thorn). Otherwise, they do it the same way as the other tribes.

The SilkWings are currently under the rule of Queen Wasp, after submitting to HiveWing rule in the Tree Wars. Their last queen, Queen Monarch, stepped down.

Queen Crane - Though shown on the map in Darkstalker (Legends), she really had no role, though she may have had an alliance with the RainWings and dramatic tension with the SeaWings.

A MudWing queen at some point in history had no heirs at her death, causing historic chaos among the tribe, disrupting the royal bloodline. The MudWings found a suitable heir, meaning that Queen Moorhen may not be descended from the original line of MudWing royalty.

Queen Moorhen - For the entire series, the MudWing queen has been Queen Moorhen. She has never been challenged because her siblings would never try to kill their "bigwings" and she probably has no heirs to the throne.

Queen Diamond - She was an ancient IceWing animus, along with being one of the ancient IceWing queens. Her son was Prince Arctic, who was also an animus. It is heavily hinted that she may have gone insane from overusing her animus abilities, for the Gift of Healing and the Gift of Vengeance.[citation needed]

Princess Snowfox - Queen Diamond's niece and most likely her successor, as Diamond had no other relatives.

Queen Glacier - She was shown to ally with Blaze because of the immense land Blaze was willing to hand over, from where the Ice Kingdom started to the start of the desert. Glacier protected Blaze, most likely just for the land she was going to receive. She was shown to not hate the dragonets but was willing to kill them if they weren't choosing Blaze. She is shown to be a rather responsible queen in Winter Turning.

In Darkness of Dragons, she is among twenty IceWings killed by the IceWing Plague (sent by Darkstalker because of his hatred for the IceWings).

Queen Snowfall - She ascended to the throne after Queen Glacier died. Snowfall also led the battle against the NightWings at Jade Mountain.

Queen Scorpion - When the IceWings and the NightWings were at war, she let them fight on her kingdom in exchange for piles of treasure from both sides. It is believed that she played both sides.

Queen Oasis - She once bathed in glory and treasure as the SandWing queen. Although one of the most powerful queens, she still fell due to a scavenger's sword. Her death caused turmoil, which led to war of SandWing Succession between her three daughters- Blister, Blaze, and Burn (see below).

Blister - She was known to be the smartest and the best at plotting. The MudWings, SeaWings, and NightWings sided with her, but the MudWings left Blister and were most likely intimidated into joining Burn's side, and the SeaWings deserted her later when they fled to the Deep Palace after Burn's forces attacked and destroyed the Summer Palace. She died by electrocution when she attempted to take the Eye of Onyx from Thorn.

Blaze - Of the queens, she is the youngest and prettiest, but the least intelligent and probably the weakest of the queens. The majority of the SandWings and the IceWings allied with her. Glacier helped her with everything. She is the only surviving queen but had to give up her throne to Queen Thorn, due to the situation with the Eye of Onyx, and her dislike of dying.

Burn - Being the oldest and the strongest, Burn was certainly the most powerful. She used brute force to earn support but still was not well-liked. The MudWings and SkyWings were allied with her. She died when Blister gave her two dragonbite vipers. One of them bit her ankle, killing her.

Queen Vigilance - She was queen of the NightWings during the war with the IceWings, and a vigilant ruler in her own eyes.

King Darkstalker - Took NightWings who were loyal to him from Glory, and led the NightWings to the Lost City of Night.

Queen Battlewinner - She and Morrowseer had the idea for the prophecy. During a fight with IceWings, Battlewinner got blasted down the throat by frostbreath but managed to survive because she made it into lava just in time, creating a balance. However, because she needed to stay in lava in order to stay alive, she was never seen by her tribe. Battlewinner died when she crawled out of her lava cauldron to attack Starflight, Fatespeaker, and Glory.

Queen Glory - Ex-Princess Greatness decided that her tribe must bow down to Glory of the RainWings in order to survive. Glory is the first queen in the series to rule over two tribes - RainWings and NightWings. Most of the NightWings decided to follow King Darkstalker to the lost Night Kingdom instead in Talons of Power, but they came back and pledged their allegiance to Glory again in Darkness of Dragons.

In ancient times, Queen Anaconda ruled over the Rainforest Kingdom, and was mentioned to be militaristic and not pacifist.

Before Glory, six queens shared the throne. They were:

Queen Glory - A former 'dragonet of destiny', Glory is shown to be a very capable Queen and considerably less lazy than those before her (see above) .

Queen Carmine - Though she never appeared directly, she did send to her daughter, Princess Sunset, and Eagle (L1) to negotiate with Queen Lagoon over villages on their borders, which the peace negotiations failed due to Albatross causing the Royal SeaWing Massacre.

Ex-Queen Scarlet - For at least 30 years, she ruled the SkyWings, even though she might have been a little psychopathic. Then, after being blasted by Glory with venom, she went missing and technically gave up the throne, later returning and attempting to reclaim it. Ruby challenged her and, after being turned back into Tourmaline, defeated Scarlet and eliminated her for once and for all.

Queen Ruby - Queen Scarlet's last remaining daughter. She is shown to be a much kinder Queen than Scarlet, seen as she replaced the arena with a hospital. Many SkyWings support her. She is truly Princess/Queen Tourmaline, but she was transformed into Ruby because of a pendant that Chameleon made from Darkstalker's scroll to turn her into a quieter, weaker daughter. She had formerly banished Peril from the Sky Kingdom but then revoked her banishment after Peril helped her save Prince Cliff and defeat Scarlet.

Queen Lagoon - The Queen before Pearl and the great-aunt to Pearl and Fathom. She was, along with 8 other dragons, killed in the Royal SeaWing Masscare.

Queen Pearl - After her grandfather Albatross went insane and killed nine dragons in the Royal SeaWing Massacre, Pearl ascended the throne peacefully, and her first move was outlawing animus magic in the Kingdom of the Sea, which persuaded Fathom to make an oath to quit using his animus magic.

Queen Coral - For many years, Queen Coral has been the queen of the SeaWings. She doesn't have many female heirs due to them being smashed by Orca's Statue, which is one reason she still reigns. One of her daughters, Orca, did challenge her, thinking she'd win, but Coral killed Orca by accidentally impaling her with her narwhal horn strapped to her tail. Coral is also shown to be a good author and writes many scrolls, including The Missing Princess and The Tragedy of Orca. For more information about her written works, visit Queen Coral's Scrolls.

Queen Sequoia - She was the last known Queen of the LeafWings, and ruled about fifty years prior during the Tree Wars. She led the LeafWings into war against the HiveWings and lost, nearly exterminating her own tribe. Queen Sequoia is actually still alive, as revealed in The Poison Jungle, but due to her being under the control of the Othermind, Queen Hazel, her great-grandaughter, has taken over.

Queen Hazel is the temporary queen of the LeafWings since her great-grandmother, Queen Sequoia is under the control of the Othermind.

Queen Monarch - She was the last queen of the SilkWings, and ruled about fifty years prior during the Tree Wars. She gave up her position and allowed her tribe to be ruled by the HiveWings because she believed the Book of Clearsight said it must be so, as Queen Wasp made this claim.

Wasp's great-great-great-grandmother - she is mentioned by Lady Scarab as the queen who ordered no more mingling of the bloodlines.

Queen Wasp -  She won the Tree Wars against the LeafWings and ordered them all to be hunted down, and she still warns her two tribes that the LeafWings are dangerous. Many consider her a tyrant due to her ability to mind-control her HiveWing subjects if she injects a special poison that came from a plant from her greenhouse into their eggs. At the end of The Hive Queen, Blue used his flamesilk to burn the plant that Queen Wasp used to inject the eggs, but there are still more of those plants growing in the Poison Jungle. 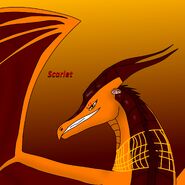 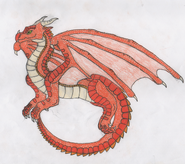 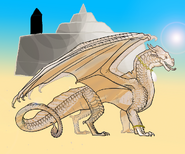 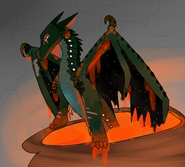 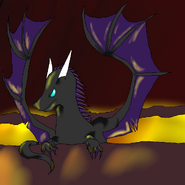 Blister, Blaze and Burn, by Atlantic
Add a photo to this gallery
Show/Hide Gallery