Start a Wiki
(This is the page for the book titled "Dragonslayer". You may be looking for the scavenger known as The Dragonslayer instead.)

Dragonslayer is the second book in the Wings of Fire: Legends and the first Wings of Fire book to be told from the point of view of scavengers. Amazon's release date for Dragonslayer was originally December 26, 2019, then February 4th, but is now set to be released on March 3rd, 2020.[1]

The cover was released on October 23rd, 2019 at 5pm EST on HomeBase, an online playground created by Scholastic. Dragonslayer takes place during the first arc, which was confirmed in a Scholastic Home Base post.

Dragonslayer switches between views of Ivy, Wren, and Leaf, which from left to right, are the scavengers on the cover. Ivy is seen holding a miniature dreamvisitor. The SandWing on the cover has been confirmed to be General Sandstorm in an interview with Tui on November 2nd, 2019.[2]

This special edition of the #1 New York Times bestselling Wings of Fire series soars back in time to give readers a glimpse of Pyrrhia through new eyes.

In the shadow of wings . . . humans fight for survival.

Ivy doesn't trust the Dragonslayer. He may be her father and the beloved ruler of Valor, but she knows he's hiding more than the treasure from the sand dragon he killed two decades ago.

Leaf doesn't trust dragons. They're the reason his favorite sister, Wren, is dead, and now he'll do whatever it takes to slay even one.

Wren doesn't trust anyone. She swore off humans after her village tried to sacrifice her to the dragons. She only has one friend, a small, wonderful mountain dragon named Sky, and they don't need anyone else.

In a world of dragons, the humans who scramble around underfoot are easy to overlook. But Ivy, Leaf, and Wren will each cross paths with dragons in ways that could shape the destiny of both species. Is a new future possible for all of them . . . one in which humans can look to the skies with hope instead of fear?

In this chapter, which is from Ivy's point of view, Ivy is shown pestering her mother about dragons, specifically why her father had to kill one. Then Ivy, along with all the adults in Valor, are summoned to a gathering in which Pine is banished from Valor for visiting the old village that was destroyed and burnt down by dragons. Ivy questions this, seeing as her father, The Dragonslayer, has visited the old village several times. Later, she queries Daffodil and Violet if they know of a rule that forbids anyone to go to the village. Violet says no, and Daffodil agrees. The chapter ends with Ivy realizing that the Dragonslayer is hiding a secret. 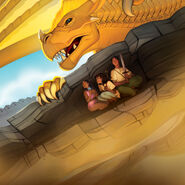 Edited Dragonslayer AudioBook Cover
Add a photo to this gallery

Start a Discussion Discussions about Dragonslayer