Wings of Fire Wiki
Register
Don't have an account?
Sign In
Advertisement
in: Characters, Males, Dragons,
and 15 more
English

"I guess minding dragonets runs in the family. But I hope I don't have to do it for the rest of my life. Dragonets are so aggravating. I want to be a soldier! I want to fight in battles and do glorious things and be a hero! What do you want to do?"
— Dune to Six-Claws, Deserter

Dune was an adult male SandWing who was introduced in The Dragonet Prophecy. He was formerly a major of Burn's army and, later, a member of the Outclaws before eventually joining the Talons of Peace. He was one of the guardians of the dragonets, tasked with teaching them hunting, alongside Kestrel and Webs. He was killed by Scarlet after attempting to shield the dragonets of destiny from her wrath.

Dune had extraordinarily[1] powerful sandy-yellow wings and flashing black eyes.[2] He was large[3] and bigger than Scarlet.[4] One of his forelegs, as well as his right wing, were badly injured in combat against IceWing soldiers, with the formerly frozen parts of his wing having been snapped off, leaving only misshapen, blackened ruin. His wing was further destroyed when Burn sliced through its tendons and membranes,[2] leaving a long scar running through it[5] and causing it to trail crookedly beside his body.[4] He also lost his foot, leaving only a foreleg stump,[3] and he wore an oddly shaped stone around his neck that served as a key to unlock the boulder that blocked the cave entrance.[6]

As a young dragon, Dune was eager,[7] enthusiastic,[8] and defensive.[9] His eyes became bleak and haunted after his injury.[10]

By the beginning of The Dragonet Prophecy, Dune was grouchy, tough, and did not show much fondness towards any the dragonets except for Sunny. He was also not as outwardly cruel as Kestrel, having spent extra time to ensure that Starflight understood particular topics. He bravely protected them when they were found by Scarlet, despite his injuries, ultimately leading to his death. He was mentioned to hate everything.[11]

After Six-Claws aided Dune is his recruitment to the SandWing army, Dune grinned at him as if Six-Claws were his new best friend.[12] They remained friends for several years, and were paired together for everything, by everyone. Six-Claws smiled at and encouraged Dune.[1] Dune stayed by Six-Claws' side all throughout the War of SandWing Succession,[13] and when Dune was injured, Six-Claws carried him back to their campsite and reassured his friend.[14] Burn used Six-Claws' care for Dune against him, despite Six-Claws' efforts to defend him.[15] Dune's safety was one of the main reasons for Six-Claws deserting Burn's army.[10]

Dune was considered by Thorn to be the only friend she could trust to keep Sunny's egg safe. When he took the egg, Thorn's trust in Dune was shattered and she immediately put up wanted posters for him.

"I guess minding dragonets runs in the family. But I hope I don't have to do it for the rest of my life. Dragonets are so aggravating. I want to be a soldier! I want to fight in battles and do glorious things and be a hero! What do you want to do?"
― to Six-Claws (Deserter)

"Whoa. Is that the princess? Why would she be out in the dunes by herself? By all the lizards, she is going to get crushed by that sandstorm."
― to Six-Claws about Blaze (Deserter)

"He didn't take her out there! He saw her out there alone and rescued her, that's what he did!"
― to Blister, about Six-Claws saving Blaze (Deserter)

"Now, can we get back to talking about how amazing I am, please?"
― to Six-Claws (Deserter)

"She said I have more promise than any officer she's ever seen. […] She said I have extraordinarily strong wings for a SandWing — almost like a SkyWing's! She said I'd be commanding armies of my own in no time."
― to Six-Claws, about General Needle (Deserter)

"That it's stupid. And we were stupid for being loyal in the first place, and now we're paying for it. I'm paying for it. There's no point to any of this."
― to Six-Claws (Deserter)

"I'm not worried about Sunny. We followed the prophecy instructions. It's not our fault she's the way she is. But the RainWing — He's not going to like that."
― to Kestrel and Webs, about Morrowseer (The Dragonet Prophecy, page 32)

"It's not natural, that much loyalty in a dragon … Especially to dragons outside your own tribe."
― to Kestrel and Webs, about Clay (The Dragonet Prophecy, page 54) 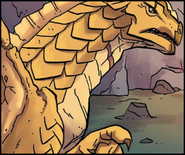