Wings of Fire Wiki
Register
Don't have an account?
Sign In
in: Characters, Males, SkyWings,
and 5 more
English

"We do not tolerate dangerous differences in the Sky Kingdom."
— Eagle to Lagoon about animus dragons, Darkstalker

(Not to be confused with Eagle, a former SkyWing soldier featured in Winter Turning.)

Eagle was an adult male SkyWing who was introduced in Darkstalker. He was an ambassador and noble who accompanied Princess Sunset to the Island Palace with the intention of negotiating shore villages with the SeaWings. He was severely wounded by Albatross's enchanted knife during the Royal SeaWing Massacre, but survived to berate the SeaWings of the dangers of animus magic and carry the message to Queen Carmine.

Eagle had shiny, polished red scales the color of hibiscus petals, drops of blood, or giant rubies, according to Fathom.[1]

He was spiteful of the SeaWings for killing Sunset, and was quick to threaten revenge.[2] Much like the rest of his tribe, he was wary of animus magic.[3] He seemed supremely uninterested by Fathom's introduction of Indigo, and seemed disapproving of the fact that everything being served at the Island Palace was uncooked.[4]

"Everything is so… raw."
― about the SeaWing's food (Darkstalker, page 64)

"We do not tolerate dangerous differences in the Sky Kingdom."
― about animus dragons (Darkstalker, page 68) 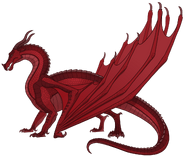 Русский
Community content is available under CC-BY-SA unless otherwise noted.