Wings of Fire Wiki
Register
Don't have an account?
Sign In
Advertisement
in: Characters, Males, SkyWings,
and 4 more
English

"She's Queen Ruby now. And I don't remember fighting any IceWings and leaving them alive. I suppose if I did, that's a mistake that could be corrected."
— Eagle to Hailstorm, Winter Turning

(Not to be confused with Eagle, a historical SkyWing ambassador featured in Darkstalker.)

Eagle is a male SkyWing who was introduced in Winter Turning. He is a soldier under Queen Ruby, and his last known location was Possibility.

Eagle has scales the color of raw tuna.[1]

When Hailstorm suggested that he and Eagle were friends, Eagle swelled with fury and looked incredulous.[2] His eyes narrowed to slits[1] and he demanded to know why Hailstorm knew his name,[2] snapping at him for referring to his queen as 'General Ruby.'[3] This implies that he is an extremely loyal, defensive soldier that would protect himself and his tribe whenever ready.

Like most SkyWings, he also hated IceWings since they were allied with Blaze during the War of SandWing Succession. He was also judgmental of Hailstorm as Eagle thought that some dragon hired him to make a fool out of him.[2] When Winter explained that Hailstorm's behavior was due to a "head injury," however, Eagle became sympathetic. 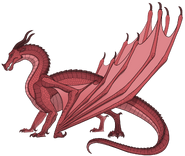