"Sorry, I thought sixteen would be enough."
—Dazzling to Magnificent during the fruit gathering challenge, The Hidden Kingdom

Queen of the RainWings (formerly)

Alive (as of The Hidden Kingdom)

The Dragonet Prophecy, The Lost Heir, The Dark Secret, The Brightest Night

Ex-Queen Dazzling is an adult female RainWing and was one of the six RainWing queens. Before Glory challenged them and took over as the new queen, Dazzling was listed as the current queen in NightWing Guide to the Dragons of Pyrrhia.

Dazzling is a quite large,[1] portly Rainwing[2] with pale green eyes.[3] She is most often seen having muted, orange-yellow cantaloupe scales[4] with forest green ones along her back and pale green ones on her sides and legs.[3] Her wing and frill membranes have a green gradient[4] and her upwards curling horns and claws are a woody, red mahogany color;[3] her underbelly is an acidic, pale yellowish-green color.[4]

Dazzling, as described by Kinkajou, was a queen who would grant anybody's petition as long as they gave her enough tribute. She appeared to be at least slightly greedy, eating the fruits that were intended for the contest, and it reflected upon her appearance. This also shows that she was probably not very intelligent and would let her wants consume her needs.

Glory described Queen Dazzling as very plump. This is because she seems to eat a lot, as shown by her eating the fruit that was meant for the fruit-gathering contest, causing her to lose.

Dazzling participated in the fruit-gathering contest against Mangrove during the competition for the RainWing throne, but lost by one fruit, as Mangrove had seventeen while she ended up with sixteen. It was then revealed that Magnificent had stashed fruits ahead of time in the forest in an attempt to ensure a victory. There had been nineteen at the start, but it turned out that Dazzling had eaten three on the way back, claiming that she had thought sixteen would be enough and thus lost the competition, despite treachery.

"Sorry, I thought sixteen would be enough."
— to Magnificent, after losing the fruit collecting in the royal challenge (The Hidden Kingdom (Book)) 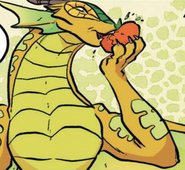 
Cite error: <ref> tags exist, but no <references/> tag was found
Retrieved from "https://wingsoffire.fandom.com/wiki/Ex-Queen_Dazzling?oldid=5968479"
Community content is available under CC-BY-SA unless otherwise noted.