"I've always been so excited about being a NightWing. I thought my powers must be the most amazing thing. But clearly, they're totally useless, if they couldn't even warn me about what was going to happen to my friends."
—Fatespeaker to Starflight, The Dark Secret

Fatespeaker is an adult female NightWing who was introduced in The Hidden Kingdom. Formerly a member of the false dragonets as the replacement for Starflight, she currently works at Jade Mountain Academy as the assistant librarian. She can sense vague emotions from other dragons and may have a very weak foresight ability. She has feelings for Starflight.

Fatespeaker has black scales with deep blue and purple underscales.[1] She has several additional silver scales: one on the outside corner of each eye, a band circling one ankle, and a few lone ones sparkling along her tail like starry freckles.[1] She is rather small.[2]

Fatespeaker aspires to peace and friendship rather than violence and anger. She is often very talkative and chatty, and can also be quite silly at times. Fatespeaker is also very optimistic and sympathetic and prefers not to fight, although her optimism can sometimes blind her from thinking. She also can be a tad stubborn, especially about her visions. This is because she believes to have them all the time, making them up often, although she may actually have weak powers. She secretly regrets her supposed NightWing abilities, as she began to consider them useless after the death of Viper. She can be somewhat naïve, as she originally thought the rest of the false dragonets were her friends and clung to this belief, even after they attempted to kill her with prompting from Morrowseer. She always felt proud to be a NightWing but felt crushed when she realized the terrible things her tribe had done.

When Starflight arrived at the Night Kingdom in the epilogue of The Hidden Kingdom, Fatespeaker had a feeling he was a part of her destiny. She quickly initiated a friendship with him and followed him around several times. When battling Flame and Viper, Fatespeaker trusted Starflight to help her, despite only knowing him for a few days. She has said that he is lucky not to have any NightWing powers. In The Brightest Night, Fatespeaker was revealed by Sunny to have romantic affections toward Starflight, which is backed up by the fact that in The Dark Secret, Fatespeaker suggested that the NightWings could make her and Starflight queen and king. This implies that in this scenario, the two would get married.

When Fatespeaker met Sunny, they almost instantly became good friends. They ended up talking to each other, asking questions and sharing information about themselves, until Glory told them to either go off and discover their twin souls elsewhere or help with battle planning, to which they replied "battle planning," at the exact same time. However, Sunny occasionally felt a little jealousy towards Fatespeaker when she was around Starflight, and vice versa. Sunny and Fatespeaker remained close, nevertheless.

The Other False Dragonets (Ochre, Viper, Squid and Flame)

Fatespeaker was part of a group of five young dragons raised by the Talons of Peace as replacements for the dragonets of destiny. Fatespeaker thought that the other False Dragonets were her friends, but they clearly didn't think the same. On multiple occasions, her "friends" said they wished she would die, and Viper even tried to kill her. Even so, she still cares for them and was distraught when Viper died and Squid left. She was also very worried about Flame when he was scarred by Viper's tail. She now seems to realize that they dislike her, though she may still have some lingering loyalty. Squid is the only one who doesn't completely hate her. He said she was the only nice fake Dragonet of Destiny, even though he said she was "plain crazy" in the same sentence and also liked the idea of having her replaced. In The Dark Secret everyone showed that they would have preferred to kill her instead of Starflight.

Morrowseer thinks that Fatespeaker is abnormally annoying, as she is always bothering him when she is bored. Despite this, Fatespeaker shows no resentment or fear against him and is cheerful as always, even when he yells at her.

"I knew it! […] I knew a NightWing was coming to see us! Didn't I tell you guys this would happen?"
― to the false dragonets of destiny (The Hidden Kingdom, prologue)

"You're lucky, […] If you have no powers. I've always been so excited about being a NightWing. I thought my powers must be the most amazing thing. But clearly, they're totally useless, if they couldn't even warn me about what was going to happen to my friends."
― to Starflight, after Viper's death (The Dark Secret, page 193)

"Except me, […] I totally do have powers."
― after learning that the NightWings don't have powers (The Brightest Night, epilogue, page 307)

"I'm pretty sure you're down there because it's a crazy-smart and crazy-brave thing to do, which sounds like you."
― to Starflight (The Dark Secret, page 83)

"Look, destiny is destiny. I don't know why you're so worried about who's in the prophecy. You delivered it; now you can sit back and watch it happen. Whether it's me or Starflight, who cares?"
― to Morrowseer (The Dark Secret, page 85)

"Ooh. I foresee that this is going to be mad scary. You go first."
― to Starflight when they are going to see Battlewinner (The Dark Secret, page 161) 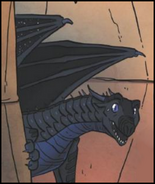 Fatespeaker from The Dark Secret (graphic novel), by Mike Holmes
Add a photo to this gallery

Retrieved from "https://wingsoffire.fandom.com/wiki/Fatespeaker?oldid=7315052"
Community content is available under CC-BY-SA unless otherwise noted.