Wings of Fire Wiki
Register
Don't have an account?
Sign In
Advertisement
in: Characters, Females, NightWings,
and 13 more
English

"But I deserve to be free. Everything I did, all my so-called "crimes," were for the good of my fellow NightWings. I was trying to find us an ally who would restore our power. I was trying to save us from being controlled by another tribe. I was trying to make sure we had a real home of our own!"
— Fierceteeth to Saguaro, Prisoners

Fierceteeth is an adult female NightWing who was introduced in The Dark Secret and the main protagonist of Prisoners. She currently resides in the Rainforest Kingdom and is in a relationship with Strongwings.

Fierceteeth has black scales[1] and is about half the size of Strongwings.[2] She has a thin, scowling shape.[3]

Fierceteeth is impatient, blunt,[4] arrogant,[5] unsentimental,[6] sharp,[7] determined,[8] strong,[9] bold,[10] untrustworthy,[11] dangerous, scheming,[12] bristling, and rebellious.[13] She can take care of herself,[14] and she believes in tribe separation and maintenance of royal bloodlines.[8] She believes that all interactions work better when she pays attention to only what is said instead of the things she thinks others are trying to say.[15] She believes that she does not need parents to tell her that she is special and brilliant, or a prophecy to make her unique and important.[7]

Fierceteeth wheedled for her mother to help her hunt,[14] but after Farsight explained that she was worried about danger towards Starflight's egg, Fierceteeth became angry and demanding.[16] She felt betrayed by Farsight's care towards her second dragonet, and believed her loyalty towards Fierceteeth to be shallow.[17]

After Starflight's egg was sent away to the mainland, Fierceteeth tried to convince Morrowseer that she is a worthy dragonet of destiny by 'accidentally' bumping into him and showing up at his lectures or bumping prey in his direction. She sometimes treated him like a father in her head. But Morrowseer did not appreciate her efforts, typically ignoring her help.

Starflight is her half-brother. She shows absolutely no concern or care for him, and there have been several times that she wished he would die. She believes that she would have made a better Dragonet of Destiny, and is jealous of his growing up off the NightWing Island. She considers him useless, and a terrible Dragonet of Destiny and NightWing. In Prisoners, she stated that although she would kill the other dragonets of destiny if her plan worked out, she would not kill Starflight because "you can't waste a NightWing," even though he betrayed their tribe. Fierceteeth hoped that someday Starflight could be "fixed."

Fierceteeth feels protected around Strongwings,[15] and he is one of the only dragons that can make her smile. He believes she is unique,[7] and he is sentimental and sincere towards her. His laughter does not make Fierceteeth angry, as other dragons' laughter does.[6] He had an odd catch in his voice when he told her how important she was, and he was willing to break the rules simply to make her happy. After realizing his affections for her, Fierceteeth wrapped her tail around his and later explained to Saguaro that he is her dragon, that he will do anything to keep her alive, and that he is the only dragon she trusts in all of Pyrrhia.[18]

"I called you a lying, conniving snake. Why can't we move here right now? Why would you keep us on that miserable island when this is here, ready and waiting for us?"
― to Morrowseer (Prisoners)

"Because it should have been me. I would have been perfect for the prophecy. I would be brilliant at saving the world. I would also have been brilliant at leading the other dragonets, proving that NightWings are the best tribe, and making sure things happened exactly as we wanted them to."
― to Saguaro (Prisoners)

"Not too impressed with your intelligence, are they?"
― to Sunny (The Brightest Night, page 19)

"It's my heart. I can put whoever I want in there."
― to Saguaro, about Strongwings (Prisoners) 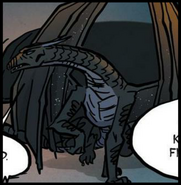