"What's wrong with you? That's not how MudWings fight! I was trained in your techniques!"
—Fjord to Clay, The Dragonet Prophecy

Old enough to be a soldier in the war

Soldier under Queen Glacier and Blaze

The Hidden Kingdom, The Dark Secret

Fjord was an adult male IceWing who fought for Blaze during the war.

He was a prisoner of Queen Scarlet, and was killed by Glory's venom in The Dragonet Prophecy.

Fjord was described with pale-blue scales "the color of the sky filled snow"[1], light blue shading down his back, and silvery, strangely tough wings[2]. His eyes were a slightly deeper, darker blue[1], and he had a blue forked tongue like all IceWings. Fjord was only a head taller than Clay but looked scarier and older, as he had many scars on his head and neck from previous battles in the SkyWing Arena.

Fjord appeared to be intent on surviving the arena, and did not stop to spare Clay. He does not hesitate to attack opponents, even Clay, who is as young as a dragonet. As he is determined to survive, he also chooses to play fairly, wanting Clay to stop talking or else they will both die. Fjord won four arena battles with only a minor injury, suggesting he was a skilled fighter, like many IceWings.

"What's wrong with you? [...] That's not how MudWings fight! I was trained in your techniques!"
— to Clay in the SkyWing arena about his fighting techniques (The Dragonet Prophecy, page 159) 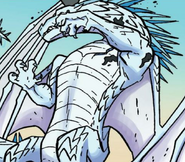 Retrieved from "https://wingsoffire.fandom.com/wiki/Fjord?oldid=5982017"
Community content is available under CC-BY-SA unless otherwise noted.