"I wish I'd done it, everyone would take me seriously… but I wouldn't hide it, I'd roar it to the world…"
— Flame's thoughts about the bombing in the History Cave, Moon Rising

Flame is an adult male SkyWing who was introduced in The Hidden Kingdom. He formerly attended Jade Mountain Academy as a member of the Gold Winglet, and was a false dragonet of destiny as the replacement for Glory. He is currently working with healers in the Sky Kingdom.

Flame has ruby-red scales,[1] red wings,[2] and orange eyes.[3] He has a scar running from one corner of his mouth sideways and up, straight through the opposite eye.[4] His face seems to be fixed in a state of permanent rage.[5]

Flame despises everyone[6] and has flashing hatred within his eyes.[7] He is angry and grouchy,[8] and he is more prone to losing his temper over situations rather than planning terror from afar.[9] However, he is shown to be very loving to his mother, Avalanche, even though in Moon Rising, he showed bitter thoughts towards her for bringing him to the academy. Sunny believes he is a completely different dragon around those who care about him. He also shows empathy for his fellow SkyWings and is shown to be very dependent since the incident in the Night Kingdom. He doesn't seem to think much for 'mushy' feelings, as he accepts Starflight's more realistic answer as to why he and Fatespeaker wanted to help him.

It was revealed that he has an interest in being an assassin when he visited Deathbringer.[10] When Moonwatcher tried to go into his mind, she found it in turmoil, with thoughts like a torrent of inky bile.[11]

Avalanche is Flame's mother and they both seemed to love each other very much, as shown by him crying in front of everyone else while embracing her. Flame seems to be one of the few dragons that Avalanche actually cares about, though Flame seemed to be angry about how his mother sent him to school.

Flame hates Fatespeaker, a trait shared by all the other False Dragonets. He tried to kill her with Viper during their 'training' session on the NightWing Island.

Although Flame shows great dislike of Ochre, he seems to at least trust him, as he let Ochre help him steal the dreamvisitor Starflight found.

Flame and Viper would always team up to beat the other False Dragonets in the training sessions. However, Flame ended up getting scratched on the snout by Viper's tail during a fight, leaving a scar.

"I hate this place, […] Hate, hate, hate it."
― about the NightWing island (The Hidden Kingdom, epilogue)

"I want you to die, too."
― to Ochre (The Hidden Kingdom, epilogue)

"Ha. And don't you all forget it."
― to the other false dragonets after Morrowseer told him he was irreplaceable (The Dark Secret, page 74)

"I already asked an animus to do that, and he said he wouldn't. Or couldn't. Slithering toadstool worm."
― about Stonemover, after he refused to heal Flame's scar (Talons of Power, page 61)

"He moaned and griped and acted like it would kill him. He said he couldn't cure all the wounded dragons in Pyrrhia, so why even start. Festering rotted lungfish!"
― about Stonemover, after he refused to heal Flame's scar (Talons of Power, page 61) 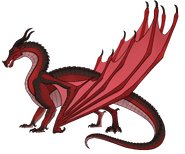