Wings of Fire Wiki
Register
Don't have an account?
Sign In
Advertisement
in: Characters, Males, Dragons,
and 13 more
English

"But he refused to fight. We heard about it, through our spies. He convinced each of his opponents to lie down and refuse to fight along with him. He has — had a way with words. No one who met him would be able to kill him."
— Coral to Tsunami about Gill, The Lost Heir

King of the SeaWings,

Gill was an adult male SeaWing who was introduced in The Dragonet Prophecy. Before being captured by the SkyWings during the War of SandWing Succession, he ruled as the SeaWing king alongside his partner, Coral. After being deprived of water for months in the Sky Kingdom, he was killed by Tsunami in the SkyWing arena.

Gill was charming and neat.[6] He smiled often[7] and was intent on brokering peace during the War of SandWing Succession.[8] When he was captured by Scarlet, he refused to fight within the SkyWing arena and convinced each of his opponents to lie down and refuse to fight along with him.[3] He had a way with words, and according to Coral, no one who met him would be able to kill him.[9] However, after being deprived of water for months, he became desperate, and his sanity had long deserted him.[3]

Abalone was a good friend of Gill's. When he was inflicted with a growing tumor, Gill sought help quickly for him. When Abalone fainted in agony, Gill desperately asked for a healer first instead of protecting Coral's eggs. When Coral found out that the eggs were eventually destroyed, she ordered execution upon Abalone, in which Gill strongly disagreed with.[1]

Gill once said he would do anything for Coral.[1] It was also stated that Gill adored Coral's writing.[10] When Coral spoke about him, a smile flickered across her snout,[9] and she further stated how important he was.[3] Her voice became hollow when she learned of his death,[9] and she immediately took time to grieve for him.[11]

When Tempest died, he leaned against her side and sobbed[12] until his face was streaked with tears.[13] He was mournful.[14]

He was angry at Turtle for not finding Snapper in time, which resulted in his daughters' deaths. Gill was resentful of his son from the incident but was sorry to have found out Snapper went off. According to Coral, Gill forgave Turtle for the incident when he was a dragonet, but he never got to tell Turtle before his death.[15]

"Yes. We're starting to wonder if this war is really worth it for anyone involved, […] Perhaps there's a way to reach a diplomatic accord. Maybe by dividing the Kingdom of Sand among the three of you, for instance."
― to Blister (Assassin)

"What are we going to do without her?"
― mourning Commander Tempest (Assassin)

"All right, stay here. Watch the eggs and don't fall asleep. I'll grab someone and send for help."
― to Abalone in Aquatic (Talons of Power, prologue)

"You shouldn't volunteer for things you're incapable of doing, […] You shouldn't offer to help if you're going to be useless."
― to Turtle (Talons of Power, prologue)

"I sent him for help, and instead he flapped around looking in all the wrong places and goofing off."
― to Coral about Turtle (Talons of Power, prologue) 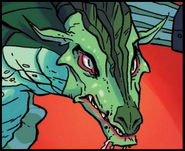