Wings of Fire Wiki
Register
Don't have an account?
Sign In
Advertisement
in: Characters, Males, SilkWings,
and 5 more
English

"They let my father die and they sent my brother away to Tsetse Hive. Lady Bloodworm is one of the cruelest of Wasp's sisters; that's why the Chrysalis here has so many members. I'm ready to do something real. I think we all are."
— Grayling to Bryony, The Poison Jungle

Member of the Chrysalis in Bloodworm Hive

Grayling is a male SilkWing who was introduced in The Poison Jungle. He is a member of the Chrysalis, and helped orchestrate the Burning of Bloodworm Hive alongside Bryony, Hemlock, and Pokeweed. He formerly lived in Bloodworm Hive and currently resides in Pantala. He is in a relationship with Bryony.

Grayling has scales in shades of gray,[1] pale and dark overlapping, resembling a pile of snuggled-up chinchillas. He is described as adorable,[2] and has goldenrod-yellow spots on his wings. Every time Bryony sees him, she thinks of small adorable furry things.[3]

Grayling is trusting,[4] sweet, and gentle.[1] He is a dedicated, compassionate dragon, intent on fighting against the HiveWings. It is likely that he is selfless, as he was willing to help attack Bloodworm Hive from inside. Both Bryony and Snowfall had described him as cute. Grayling seems to be a friendly dragon who cares deeply about others; he is extremely hopeful, as he believed the LeafWings would succeed and that every Chrysalis member in the Bloodworm Hive together would be able to overthrow the controlled HiveWings.

Grayling appeared in the prologue alongside Bryony, Hemlock, and Pokeweed. Bryony told Hemlock that all of the SilkWings who had been living in Bloodworm Hive had been warned of the attack, and were ready to evacuate. As Bryony showed him the plants that were being used, they discussed the attack and its possible consequences. Grayling then told Bryony how grateful he was that the LeafWings had come to free the SilkWings, which made Bryony feel very guilty as the LeafWings' real motive was revenge. Grayling asked if he and a couple hundred other SilkWings could hide out in the caves with the rest of the LeafWings. Bryony promised to ask Hemlock about it.

Grayling appears in one of Snowfall's visions, when she is looking through Bryony's perspective. Grayling escapes the Hives together with Bryony and her companions, and the two were shown to be loving towards each other.

Bryony is in love with Grayling, and he thinks she is a hero. She would protect him at all costs, and they are physically affectionate towards one another.[1] Bryony is reassuring towards him[4] and feels affection towards him, believing him to be special and beloved.[2]

"They let my father die and they sent my brother away to Tsetse Hive. Bloodworm is one of the cruelest of Wasp's sisters; that's why the Chrysalis here has so many members. I'm ready to do something real. I think we all are."
― Grayling's motives (The Poison Jungle, prologue)

"It's just … I'm just amazed at how much trouble your tribe has gone to — all these plants and all this work — just to save us. The SilkWings. You could have left us to rot in Queen Wasp's talons, after we abandoned you during the Tree Wars. But you didn't. You came back to set us free."
― about LeafWings working to take down HiveWings (The Poison Jungle, prologue)

"It's more like a cage anyway. Where are you going to go after it burns?"
― describing Bloodworm Hive (The Poison Jungle, prologue)

"No. They're out there somewhere. The LeafWings have survived terrible things before. They'll fight back. The HiveWings won't win; they can't."
― to Hemlock about the LeafWings (The Dangerous Gift, page 165) 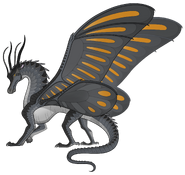