Wings of Fire Wiki
Register
Don't have an account?
Sign In
in: Characters, Males, SeaWings,
and 3 more
English

"And stop the war, whatever you have to do."
— Herring to Tsunami, The Lost Heir

Alive (as of The Lost Heir)

Herring is a male SeaWing who was introduced in The Lost Heir. He is currently a guard serving under Shark, and resides in the Kingdom of the Sea.

Herring appeared to be a tamer guard and is not shown to be rude or aggressive. He also seems to have a strong relationship with his brother, and seemed to be grateful of Tsunami for saving him during the SeaWing Council Meeting. He also seems to believe in the prophecy and is hopeful that the dragonets can stop it, willing to give her the keys despite it meaning that he and the other guards would be in extreme risk of being punished by Shark.

Herring was one of the four SeaWing guards on duty when Clay was chained to the floor of the Summer Palace. The other guards were Snail, Kelp, and Flounder. Tsunami later convinced them to give her the key to free Clay from his chains, since they would be disobeying orders if they knowingly allowed the dragonets of destiny to drown. Herring tells Tsunami that she had saved his brother earlier when she got him to the healers, as Coral would have kept him there for the entire meeting. 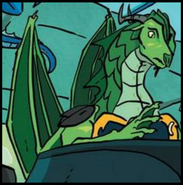