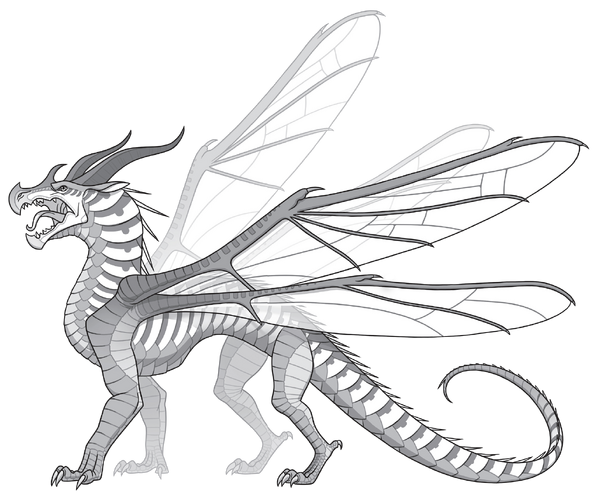 HiveWings are one of the three tribes that live on Pantala. HiveWings were formerly the dominant tribe of Pantala, as they enslaved the SilkWings and nearly exterminated the LeafWings in the Tree Wars. Their scales primarily include shades of red, yellow, orange, and always some black, but some may have variations such as dark green, such as Treehopper. They are currently ruled by Queen Jewel, and are primarily based on wasps, but are possibly partly inspired by bees and other varieties of beetles and insects. They are descended from BeetleWings with NightWing blood from Clearsight, who is the common ancestor of all HiveWings.

HiveWings have slender, strong, and muscular bodies, with four thin and clear segmented wings that are similar to that of dragonflies and other insects. According to the description in A Guide to the Dragons of Pantala, HiveWings can be red, yellow, and/or orange, but always have some black scales among them due to their shared ancestor, Clearsight. Some can even be almost completely black in color, as seen in Hawker and Treehopper. HiveWings have a slightly compact face, with a smaller axe-like ridge on the tip of their snout, and a larger curved ridge on their forehead. Some HiveWings, such as Katydid, Sandfly, and Scarab have freckle-like scales. Confirmed eye colors include black, dark orange, brown, red, amber, yellow-gold, and green. The "yellow-orange-green glow" of HiveWing eyes is mentioned by Blue. They have a pair of long, curved, and smooth-looking horns that raise slightly above their head, the tips curving slightly forward, giving them an almost regal appearance. Long, thin spikes go down their spines, to the tip of their tails, which have a slightly larger spine. They may also have wrist spikes. Some are hatched with stingers in their wrists or tails, which also comes with poison or venom. HiveWing eggs are white.[1] HiveWings are seen to have dark green blood,[2] though this may be exclusive to Wasp, as she was in connection with the Othermind for about 50 years.

Old biology books state that HiveWings used to have antennae.[3]

HiveWings are omnivorous and eat animals that live on the savanna, like zebras, wildebeest, gazelle, lions, and more. HiveWings also eat candy, like honey drops and nectar.[4] Cricket was noted to smell like cinammon.[5] The HiveWings on the cover for The Hive Queen showed a shop selling whole sharks, leading to believe that sharks or other marine life may be part of the HiveWing diet. Another shop on the cover seems to be selling mounds of herbs in baskets. Cricket states that they do not like to eat most reptiles, as HiveWings believe they may be related.[6] They also drink tea[7] and coffee.[8] Sliced avocados were jokingly mentioned by Cricket.[7] Cricket was mentioned to have breath that smelled like apples.[9] In The Hive Queen, Cricket remembered a drink that tasted like lime and drank one that smelled like coconut.

According to the Pantalan dragon guide, the HiveWings' powers can vary from dragon to dragon, though many do not have any powers.[10] These abilities are genetic and can be passed down. Their abilities include deadly stingers extending from their wrists, venom or a paralyzing toxin known as nerve poison[11] in their claws, stingers, or teeth, boiling acid that can be shot from a stinger on their tail, and emanating a horrible stench said to smell like dead rotting things pickled in sulfur.[12] Swordtail describes the paralyzing toxin as "fire burning every nerve in your body" and when it wears off, "all you want to do is run or fly or even blink, but you can't move a single muscle until the toxin wears off."[13] A dragon paralyzed by HiveWing venom can be unparalyzed when given a strong stimulant.[14] Some guards were assumed by Blue to be able to shoot poisonous darts from their tails.[15] HiveWings also have a precise internal clock which was described to keep their days on schedule and warn them when the rainy season is coming.[16]

Wasp, the former HiveWing queen, could also control the minds of any HiveWing whom she had injected with the breath of evil. This plant was kept in her off-limits, personal greenhouse garden. HiveWings are said to have pure white eyes[17] when under the mind-control and move in eerie unison.[18] Katydid describes the feeling as having an unstoppable urge to do what the Queen makes them, similar to being hypnotized.[19]

HiveWings were first-class citizens in their society. They live in Hives formerly ruled by Queen Wasp and her female relatives, most of them sisters. Unlike other dragon tribes in both Pantala and Pyrrhia, Wasp's relatives who ruled the other Hives were not titled as Princess, but Lady. However, the Queen still outranked the Ladies. Despite this, she still allowed others to rule the Hives, so they felt like they had some power. It was also difficult for HiveWings to get a divorce because they needed permission from the queen in order to do so.[20] If the queen allowed a HiveWing couple to get divorced, they had to go through a whole separation request process that is very complicated. It is unknown what kind of work HiveWings need to do in order to become divorced but the process was difficult.[20] It was considered strongly forbidden for a HiveWing and a SilkWing to get together.[21]

HiveWings used SilkWings as servants, and used them for personal gain in many ways, such as using them as cooks, butlers, and other jobs. Servants followed their mistress.[22] HiveWings from Jewel Hive owned SilkWing servants as an accessory, often striving to make them look more extravagant than the others. They often made them stand in windows just looking pretty, or paraded them around.[23]

HiveWings are named after a variety of insects and bugs. Dragons from the tribe can be named after different species of bee and wasp, as well as ants, beetles, weevils, crickets, praying mantis, etc.

They can also be named after types of worms, such as Earthworm and Bloodworm. There is also one arachnid name, being Vinegaroon. 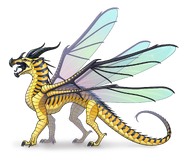 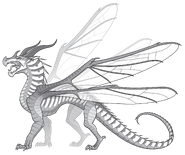