Humans, formerly known as scavengers to the Pyrrhian dragons, are a species inhabiting both Pyrrhia and Pantala. They were regarded by dragons to be somewhat more dangerous than average prey, as they have weapons and are more intelligent, although most dragons did not seem to acknowledge or even notice it. They were seen as a nuisance or prey to most dragons, and are endangered.[1] Winter established a scavenger sanctuary at the end of Darkness of Dragons.

As of The Dangerous Gift, dragons became aware of humanity's sentience and the Pyrrhian queens issued a nationwide decree prohibiting dragons from hunting or eating them. Winter is currently overseeing the scavenger outreach project.[2]

Their feelings have been described by NightWing mind-readers to be small and muddled, but very powerful. Their emotions are heavily similar to dragon emotions.[3]

Humans were once the dominant life form of Pyrrhia, and were rumored to have easily killed dragons. Some dragons, such as Webs, have doubts that they could have ever accomplished this.[4] Eventually, the dragons came together and arranged separate tribes, overthrowing the humans and almost wiping them out completely. Dragons know this event as the Scorching, but knowledge of it may be lost to human history, as neither Talisman nor Valor have been mentioned to teach about it in school. Humans have villages and towns, known as dens to dragons, all over the continent, which have frequently been destroyed by dragons following the death of Queen Oasis and the stealing of the Eye of Onyx. Before the War of SandWing Succession, a human would occasionally be eaten, but dragons rarely burned down villages.[5] Most humans love treasure,[6] and they are notorious for stealing treasure from dragons, no matter how often members of their species are eaten.[7]

Prior to The Dangerous Gift, most dragons did not consider humans a sentient life form, instead seeing them something closer to oversized squirrels. The existence of technologically advanced human settlements like the Indestructible City seems to be mostly ignored or brushed off by dragons. Humans are well-known to live in groups, even preferring the company of dragons in some cases.[8]

Tui confirmed that humans do not see dragons as intelligent life forms, more as just "giant flying sharks." They do have more clues than the dragons to the contrary, as it is hard to miss the giant castles and structures inhabited by dragons. Tui stated that it's a very debated topic among humans.[event 1] This predated the publication of Dragonslayer and The Dangerous Gift, both of which contained major developments in human-dragon relations.

Throughout the series, humans have been known to use weapons in defense against dragons. They do not have any natural defenses. Weapons they are known to use are spears,[9] swords, knives, and a modified version of a ballista to launch flaming spikes to kill dragons. The spear that killed Queen Oasis was described to be only about as long as Six-Claws' foreleg and so thin that he could have snapped it between his teeth.[9] In Dragonslayer, Undauntable and Rowan mention that the humans at The Indestructible City use catapults to fight dragons. The Indestructible City also has a water-collecting contraption similar to a waterwheel built out into the Winding Tail River.[10] Many human civilizations, such as Valor, are hidden away from where dragons would see them, such as underground,[11] and Talisman has a warning bell,[12] underground bunkers,[13] and most of the town buildings are camouflaged from the air with leaves and branches. 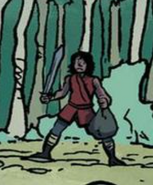 Mushroom from The Dragonet Prophecy (graphic novel), by Mike Holmes 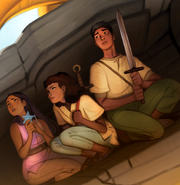 Leaf, Ivy, and Wren from the cover of Dragonslayer, by Joy Ang