The IceWing palace is located on the far northern edge of the Ice Kingdom. The palace is occupied by the IceWing queen and aristocratic IceWings who are ranked in the Second Circle or above.

Also known as the gift of splendor, the IceWing palace was designed, built, and enchanted centuries ago by a pair of animus twins, with magic that ensured its wall of ice would never melt, crack, or be harmed by an outside attack. It soars miles into the air, with towers and balconies[1] and spires[2] that pierce the clouds. It contains a great number of rooms on many various levels.[3]

The palace's interior has translucent walls[4] and icy floors, and is marginally warmer than its exterior.[5] The treasury is a guarded vault that is located near the center of the palace.[6] Some of the floors are covered in shards of ice.[4]

It is composed of a thousand different glittering shades of blue,[7] with its interior walls being cool and smooth.[7] The lights of the palace shimmer blue-green-silver, like captured starlight. The dark ocean surrounding it serves as a mirror, sending the same lights dancing in blurred mimicry around the palace's base. A galaxy of smaller lights spirals out in five curved arms from the palace, illuminating lower aristocrats' homes, the training schools that are open all night, and the shimmering ice sculpture gardens.[8]

The pristine[9] central courtyard is covered in snow, a vast space dominated by the two most important gifts in IceWing history: the gifts of light and order.[10] The Tree of Light's frost-kissed twigs, leaves, and branches are identical to that of a normal tree.[10] It has eternal life, and its moon globes grow year-round, with a new bud growing on the tree immediately after a moon globe has been taken.[11] Under the Tree of Light, there is a long path to the wall of Circle rankings.[11] There are many windows in the palace that overlook the courtyard.[12] It is often silver, empty, cold, and wet, speckled with strange shadows from the gift of light.[13]

There is a grand entrance to the palace: a set of crystal-studded gates about halfway up the central keep.[8] They are carved in the shapes of giant dragon wings, matching the small ice sculptures of dragons, wings, and talons that top all of the columns and finials. It is possible to fly over the palace walls into the interior courtyards, but that is considered gauche and career suicide. According to IceWing protocol, visitors wait at the gates to be admitted.[3]

The palace also includes a vast entrance hall that leads to three arched openings leading to the central courtyard. The gift of elegance provides pale blue stars that seem to drift through the palace's otherwise bare, translucent walls. Up close, small, phosphorescent glass snowflakes are seen encased in the ice, glowing silvery blue as they fell, mimicking the weather outside.[14]

Towards the guest dome, the halls of the palace become smaller and less spacious, with small, odd, mismatched carvings everywhere. The halls lead towards several flight ledges, where a guest dome rests in the clearing below. It glows from within like firelit marble, covering most of the plain between the palace and the neighboring ocean. Snow dusts the outside and the ground surrounding it. Several welcome banquets were hosted here during the era of Darkstalker, and the interior was warm, heated by the gift of diplomacy. The dome's blocks on ice were carved by ordinary IceWing talons.[4]

There is a palace library containing a few old scrolls about the Diamond Trial.[9]

Winter's room was described to have one window overlooking the central courtyard, with a shelf of ice serving as a bed and two warm, white polar bear rugs covering the floor.[15] Narwhal was also mentioned to have personal chambers somewhere in the palace.[16]

Winter mentioned that the palace has a flight training tower.[17]

The throne room is grand, with several windows and a throne in its center.[18]

The queen's chambers are cluttered with miniature, unidentifiable ice sculptures, crafted by Mink.[19] In the main chamber, a bed dominates the center of the room, a block of ice carved into whorls and drifts where a dragon body can fit perfectly.[20] The space is also shared by a jewel cabinet, a polar bear rug by the window, and an icy bathtub in a separate room.[21]

The Forbidden Treasury is known to few, and is only spoken of in whispers. It is buried in an ice cave deep beneath the palace, and the sole way to access it is through a secret passageway from the queen's royal chambers. Only queens and princesses are sure of its existence and are allowed to enter.[6] To access it, a space at the foot of the bed must be pressed, and the queen's bed will shift aside soundlessly, revealing a hole underneath that plunges into endless darkness.[21] The walls glitter, and after flying down a long, dark tunnel, the floor of the cave emerges as a smooth, glassy surface. A corridor stretches[22] toward the treasury, and the walls are composed of the blackest ice, glittering with silvery filaments and bubbles when light hits them. The passage spirals in on itself and becomes smaller[23] like a snail shell, with alcoves cut into the ice at eye level every few steps. The first two alcoves in the chamber are empty, but the third contains the gift of strength, with words carved into the ice beneath it that read 'THE GIFT OF STRENGTH. USE CAUTIOUSLY.'[24] The fourth alcove holds a scepter, carved from dark blue rock and embedded with small diamonds, with an inscription reading 'THE GIFT OF COMPROMISE' and other unknown text that covers half of the wall under the alcove.[25] The fifth alcove holds the gift of vision, and the sixth is empty, with its inscription violently scratched out.[26] The seventh alcove is an oddity; it is not spaced evenly like the others, and looks hacked out of the ice instead of beautifully carved. The item inside is an unwearable piece of mystery silver, with its scribble-scratch writing underneath reading 'PART OF THE GIFT OF UNDERSTANDING.' The eighth alcove holds the gift of stealth.[23]

The Gift of Order

The gift of order is an animus-touched wall located in a central courtyard of the IceWing palace. There are seven circles of dragonet and adult rankings, and each day the queen is expected to re-order all of the dragons based on their performance in school, day-to-day life, and other considerations. After returning from Sanctuary, Queen Snowfall destroyed the wall using the gift of strength, much to the shock of Tundra and other IceWing traditionalists, after realizing that being sorted made dragons focus so much on their negative aspects that they couldn't see their positive aspects.

After Hailstorm and Winter return to the Ice Kingdom, they are admitted at the palace gates. Once let through, they obtain one moon globe each from the Tree of Light. In the central courtyard, they are assessed by Narwhal. Winter then went to sleep in his room and then attends a rankings ceremony the next morning, in which Hailstorm and Winter are given their new rankings.

Snowfall visited the Forbidden Treasury when she decided that she had no choice without any other source of animus magic. She retrieved multiple powerful objects from the Treasury, including Opal's ring of vision, and gleefully thought about how she could drive the Pantalan refugees out of the kingdom with those dangerous items. 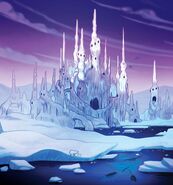 The IceWing palace from the cover of Winter Turning, by Joy Ang

The IceWing Palace from the map of Pyrrhia, by Mike Schley

The IceWing Palace from the era of Darkstalker, by Mike Schley
Add a photo to this gallery

Retrieved from "https://wingsoffire.fandom.com/wiki/IceWing_palace?oldid=7410077"
Community content is available under CC-BY-SA unless otherwise noted.