The Ice Kingdom is the territory of the IceWings, and consists of the "head," or northern peninsula, of Pyrrhia. It borders the northern ocean, the Kingdom of Sand, and a portion of the Sky Kingdom. It is currently ruled by Queen Snowfall.

The Ice Kingdom is well known for its sub-zero temperatures and freezing winds.[1] It is beautiful, cool, snowy, and crystalline.[2] There are islands with caves surrounding the IceWing palace,[3] as well as dark green oceans studded with drifting pieces of ice or glaciers.[4] Distant splashes of whales and seals carry across the cool, quiet ice, and the smallest changes can be detected in the frozen world.[5] Winter described the Ice Kingdom to be the safest and most purely beautiful place in Pyrrhia,[6] a landscape dotted with snowy,[7] sheer cliffs and pure blue lakes.[8] It is rare to find complete darkness, even at night; the gift of light is spread throughout the kingdom, and there are moon globes everywhere. There is a lot of open space, and the three moons glitter on everything: the snow, the palace, the frozen lakes, and the glaciers.[9] According to Winter, cities in the Ice Kingdom are very carefully built. It is clear where the wealth and power are, who has it, and who can influence it.[10]

The Ice Kingdom's land is mostly snowy, icy, cold tundra, with multiple glaciers adding to the overall shape of the kingdom. It is cold enough that almost everywhere is covered with snow.[11] Darkstalker said that for tribes besides IceWings, the Ice Kingdom would be horrible to conquer.[12] The map of Pyrrhia shows that there are areas of mountain and boreal forest in the Ice Kingdom, which are also snow-covered. Icebergs, ice sheets, and ice floes litter the sea around the kingdom.

Queen Snowfall's palace is located in the far north, on the peninsula. Inside the palace, there is the moon globe tree — also known as the gift of light — created by the animus Frostbite.

It was mentioned in the book Darkstalker that there were three other palaces in the Ice Kingdom.[13]

The land in between the Kingdom of Sand and the Ice Kingdom is barren wasteland.[14]

The Great Ice Cliff was an animus touched wall that bordered part of the Ice Kingdom. The cliff shot icicle spears at any dragon who was not an IceWing if they attempt to fly over the wall into the Ice Kingdom. It was an animus gift from an unnamed IceWing animus and was named the gift of defense.[1] The only way for a dragon from another tribe to fly over without getting killed is to put on one of three animus-touched bracelets that prevent the Great Ice Cliff's effects.[13] It was destroyed by Queen Snowfall using the gift of strength in The Dangerous Gift.[15]

The Diamond Caves are a system of ice caverns within the Ice Kingdom where the Diamond Trial takes place. They were named after the trial's creator, Queen Diamond. It is also known as the gift of vengeance. These caves are also where Foeslayer was trapped until Winter set her free in Winter Turning. Winter mentions that Queen Diamond used her animus power more than once to create the Diamond Caves, and then to imprison Foeslayer.

They are a series of caves and caverns made mostly of ice, filled with stalactites and stalagmites like any other cavern, located at the north-westernmost peninsula on Pyrrhia.[16] Near Foeslayer's cave, there is an uncountable amount of frozen IceWing dragonets, who all died during the Diamond Trial. An underground river runs near the entrance to the cave, into a dark chasm.[17] Inside the cave it was said to have lots of frozen dragons in different poses, most of them looking like they were in a battle. Winter thinks that they are the losing challengers of the Diamond Trial.

All known villages in the Ice Kingdom are named as descriptive toponyms, all being long, hyphenated names to describe themselves. Known villages include Among-the-Evergreens,[18] Hamlet-That-Worships-the-Whales-Who-Sing-at-Night,[19] Where-the-Terns-Fly,[19] and Where-the-Whales-Leap-at-Dawn.[19]

Glory and Jambu traveled to the border of the Ice Kingdom disguised as IceWings to find Blaze. They tested her to see if she was worthy of being the next SandWing queen. Deathbringer, a NightWing assassin, was hiding near Blaze's palace. He attempted to kill Blaze, but did not succeed.

The beginning of the book took place in the kingdom during Winter's flashback, which follows his dragonethood memories and struggles.

Later on in the story, Winter returned to the Ice Kingdom with Hailstorm after rescuing him, which resulted in Winter moving up to the First Circle. Because Hailstorm was at the bottom of the ranking, the two dragons underwent the Diamond Trial and face Foeslayer. After the trial, Hailstorm did not want to kill Winter, to which the two agree and parted ways. Now alone, Winter freed Foeslayer from her imprisonment in the cave and she returned to the former Night Kingdom.

Peril had flashbacks to the night she and Scarlet had fled from Burn's weirdling tower, where they temporarily settled in the wasteland in between the Kingdom of Sand and the Ice Kingdom.

Anemone mentioned the Ice Kingdom's main palace in her spell to stop the Battle of Jade Mountain.

In the epilogue, Snowfall and Jerboa III meet in the Ice Kingdom, and Snowfall insists that she comes earlier next time. Then she says that the Great Ice Cliff only protects the kingdom from dragons invading from the south, and that anyone can come from the east or west borders. Jerboa III says that it will be too cold for any other dragons to come from those borders, but Snowfall says that hundreds of mysterious dragons were approaching from the west border and demanded that Jerboa III expand the Great Ice Cliff. However, Jerboa III says that Glacier never abused her animus powers and that she would not do it, plus animus magic was broken. When Snowfall asked her to prove it, she enchanted a frozen twig to make anything it touched turn green. When she offered it to Snowfall, she rejected it. When Jerboa III touched the stick herself, all of her scales stayed the same color. Snowfall then said that Jerboa III was absolutely useless without her animus powers.

Snowfall spoke with the refugees from Pantala and decides to escort them out of her kingdom to Jerboa's cove in the Kingdom of Sand.

Snowfall and Lynx return to the Ice Kingdom for a day before Lynx goes to Pantala with the other ten representatives. Utilizing the gift of strength, Snowfall started to destroy the Great Ice Cliff before returning to her palace. Tundra and Permafrost attempted to place Mink as Queen Regent so they could control her and rule the kingdom. Snowfall discovered that while Mink was Queen, she had worn the crown, which turned out to be cursed to make the wearer paranoid and have an immense hatred of NightWings like Queen Diamond. Snowfall used the gift of strength to destroy the IceWings' Circle Rankings, realizing how pointless it is.

After this incident, Snowfall goes to bed and has her final dream incited from the gift of vision. She dreams she is her mother, Queen Glacier, and meets the spirit of the animus who created the gift of visions, Opal. Opal takes back the vision, as Snowfall had learned her lesson.

Several NightWings came to the Ice Kingdom to forge an alliance with the IceWings against the SkyWings. Here, Hope fell in love with Arctic.

Darkstalker also caught a hawk for Arctic later on in the story to remind him of the Ice Kingdom.

Six-Claws was searching for Princess Blaze who, he said, fled up north towards the IceWing kingdom.

Runaway was featured in the Ice Kingdom. Arctic and Foeslayer's runaway started the NightWing-IceWing War.

Winter and the Ice Kingdom on the cover of Winter Turning, by Joy Ang

Lynx, Snowfall, and the Ice Kingdom on the cover of The Dangerous Gift, by Joy Ang

The Ice Kingdom on the cover of Runaway, by Joy Ang 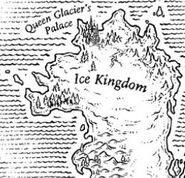 The Ice Kingdom on the map of Pyrrhia, by Mike Schley 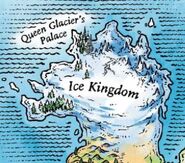 The Ice Kingdom on the colored map of Pyrrhia, by Mike Schley 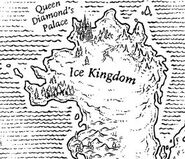 The Ice Kingdom on the map in Darkstalker, by Mike Schley 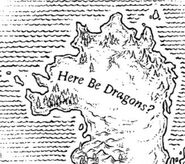 The Ice Kingdom on the map in Dragonslayer, by Mike Schley