Wings of Fire Wiki
Register
Don't have an account?
Sign In
Advertisement
in: Citations needed, Characters, Females,
and 9 more
English

"Listen, Blue. Stop trusting them right now. They've let you go about your ordinary life so far, but now you look dangerous to them, and they're not going to let you have that life back. It's gone. Please promise me you'll hide from them, Blue. And don't let them catch you."
— Io to Blue about the HiveWings, The Lost Continent

Member of the Chrysalis in Cicada Hive

Io is an adult female SilkWing who was introduced in The Lost Continent. She is Swordtail's sister and a member of the Cicada Hive Chrysalis. She was last seen flying with Cinnabar to Cicada Hive.

Io has iridescent[1] purple scales, and spectacular,[2] huge,[3] long,[4] and dark[5] indigo[6] wings dotted here and there with iridescent[3] aquamarine green, as well as long, aristocratic-looking bones and horns.[5] She is very tall,[3] much taller than Luna, as she is described to tower over her.[5]

Io has a fervent, desperate hope to save her tribe and friends.[7] She was shown to be very kind, but has an impatient side, shown when Blue paused in The Lost Continent as they were running from the HiveWings. It is made clear that she has a hatred towards HiveWings. However, when she learned about Cricket, she was quick to thank her, despite her being a HiveWing. Like her brother, Swordtail, she has quite rebellious nature, which probably is what led her to join the rebellion in the first place. Io is also shown to have a more calm and mature nature than Swordtail, matching her brother's boiling energy with her own kind of fierce passion. She is determined, convincingly telling Blue to stop believing in the HiveWings and refusing to let her tribe be left to the othermind, despite the fact that she would have to risk her own life to save them.

Io appears to be supportive of her brother, as she attended his girlfriend's Metamorphosis on her own accord. The two were happy to be reunited in the SapWing village.

"No way! […] We can't just let them take him!"
― to Burnet when she says Blue should turn himself in for being a flamesilk (The Lost Continent, page 47)

"Why did it have to be you? […] The one SilkWing who thinks HiveWings have any good in them? Listen, Blue. Stop trusting them right now. They've let you go about your ordinary life so far, but now you look dangerous to them, and they're not going to let you have that life back. It's gone."
― to Blue about trusting HiveWings (The Lost Continent, page 48)

"There are SilkWings who can help you, […] if you can find them. A group called the Chrysalis."
― to Blue when she tells him to run (The Lost Continent, page 53)

"Because every time someone says to you, 'Hey, wasn't that mean what that HiveWing did?' you say, 'Oh, maybe she's tired or frustrated with work or just lost something important or is having a fight with her sister,' and then it's kind of hard to follow up with 'Well, care to join a movement to take her down?'"
― to Blue about why he hasn't heard of the Chrysalis (The Lost Continent, page 54)

"Well, my plan was to hide with some friends in the Yellowjacket Hive Chrysalis, […] but when I got there, I was spotted by guards, who chased me pretty much all the way to the jungle. I flew inside to escape them and almost immediately got caught by this enormous horrifying insanely sticky plant. It was going to eat me, Swordtail! With, like, its goo or something! How wild is that? But these dragons rescued me, and they said I could lie low here for a while."
― to Swordtail about being in the Poison Jungle (The Poison Jungle, page 131-132)

"It's too quiet, […] the HiveWings must be here. I bet they've got all the SilkWings trapped in there with them."
― to Cinnabar about Cicada Hive (The Dangerous Gift, page 196) 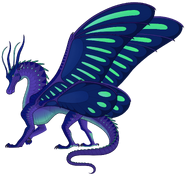 Reference by Skyla the Skywing