(The winglets are not to be confused with Winglets, which are short stories in the Wings of Fire series.)

Jade Mountain Academy is an intertribal school located within Jade Mountain, founded by the dragonets of destiny after they ended of the War of SandWing Succession. The school opened and accepted students from all tribes six months after the end of the war, dividing them into five winglets: the Jade Winglet, the Gold Winglet, the Silver Winglet, the Copper Winglet, and the Quartz Winglet, each of which includes one dragonet from each of the seven dragon tribes of Pyrrhia. With the exclusion of Peril, groups of two or three dragonets from the same winglet share a sleeping cave, making them clawmates. Tsunami is the current headmistress of the school. 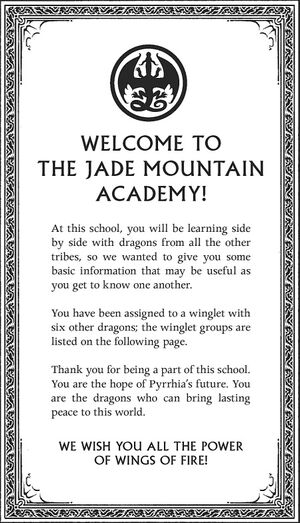 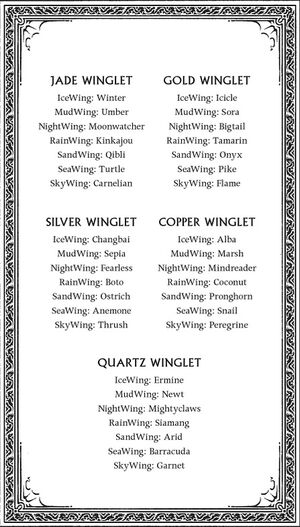 The school is located within Jade Mountain, which has fang-shaped[1] twin peaks.[2] The main entrance to the school is on a mountaintop,[3] consisting of a wide ledge.[4] There is only one other entrance, which is located through Stonemover's cave.[5] The tunnels are dimly lit.[6][7]

The caves of the school founders, as well as Peril's, are all located away from those of the students. Peril's cave is located across the main central cave from Clay's.[7]

The Art Cave is the room where students learn all sorts of art forms, including painting, pottery, glass-working, metalworking, weaving, and woodworking. The room is filled with art supplies tucked into every crevice and wooden dragon sculptures placed on little stone shelves.[8] It is described by Kinkajou to look like if a couple of RainWings just emoted all over it.[9]

The Great Hall is the unofficial entrance of Jade Mountain Academy. The cave has a dimmer light in comparison to that of outside,[10] with enough room to fit four hundred dragons inside comfortably and still have enough space for more to fly overhead. There is also sunlight pouring into the cave, with twisting stalactites that sometimes reach the floor, forming twisting columns,[11] and outgrowths of stalagmites that create shadowy corners.[12] A huge bronze gong hangs against the back wall[11] and in the center,[12] with three flying dragons carved into its surface. When the school first opened, a huge banner made of woven green vines reading "Welcome, students!" in giant purple-and-white flowers hung from two stalactites. Two tunnel openings form along the cave's left wall, with two more on the right wall. Next to each entrance, a map is hung, displaying tunnel routes to help students find their way around the huge caves.[11]

The healing center contains bandages and a colored diagram of a MudWing, showing where the muscles are located in the dragon body.[13] It includes a class called Herbs and Healing, requested by Peregrine and Tamarin especially.[14]

The history cave was where Webs taught history to the students of the academy. It was described to be covered in maps, each marked with a different year, and with stacks of scrolls that overflowed the wooden racks provided.[15] Sora destroyed the cave with dragonflame cactus in an attempt to kill Icicle during the events of Moon Rising, forcing the history class to be relocated to a different cave. The new cave is located several corridors away from the previous one. It includes a skylight, and it is slightly dark, damp, and chilly, with one exit and scrolls piled in corners.[16]

The entrance of the Library starts as a side corridor lined with hanging scrolls. Many of them have quotes such as "Knowledge is a flame in the darkness" and "The claws of war are no match for the wings of wisdom." At the end of the hall, a room full of iridescent green sunlight is present. The light is the result of the sun shining through large translucent,[17] semi-transparent leaves placed over windows, with one of those windows torn open by Icicle who broke out in Moon Rising. Scrolls are arranged all over the cave, in cubby holes on the walls, on racks, and in cylinders. Every corner had a spot to curl up and read in, sometimes a rock ledge, sometimes a pile of moss, sometimes a bed of reeds, and sometimes carpets. Sunlight comes down from skylights in the roof and filtered through leaves covering the windows.[18] There is a circular wooden desk labeled 'LIBRARIAN' in the center where Starflight manages the scrolls. Starflight has stamps of every student's name that he stamps on a scroll slot/card.[19]

The library stamps are described as small rectangles of wood, about as long as two claws, and with the student's name carved backward in raised letters on one side. Every student gets a library stamp when they visit the library at Jade Mountain Academy. Starflight keeps them behind his desk, and he hands them to students when they see him for the first time since arrival.

The mourning cave has a tall, arched roof, towering slender pillars of pale gray rock, and windows and skylights that are open to the air. Carnelian's body was wrapped in white silk during the mourning period, and the cave entrance is marked by a boulder.[21]

The music cave is a vast, round cave filled with various instruments, including harps, marimbas, maracas, drums, didgeridoos, and possibly an upright bass, with a skylight above it. It is designed so that sound bounces around the cave with smooth walls.[22]

The prey center, set up by Clay, is a large cave open to the sky on one side (with this side covered by a wall of rocks to prevent the prey from escaping). It was often described as chaotic due to students and animals running around yelling, shouting, catching prey, or eating.[23] It is usually filled with animal prey with a pile of fish hunted by expeditions, and a pile of rainforest fruit for RainWing students.[24] It can be accessed through corridors leading from the residents' sleeping caves.[25]

This cave is where Stonemover is located. There is a torch flickering from a post near Stonemover's head.[26] Students are welcome to come and visit Stonemover if they please.[27] The cave is shown to be big enough for Darkstalker to fit inside, but just barely.

Sunny's office is part sleeping-cave, part office, with a bundle of blankets tied neatly away in one back corner. Three low tables arranged in a semicircle take up the majority of the room, scattered with paper, ink, small slates for announcements, and maps. There are two openings in the walls where the sunlight spills across the room, and the rest of the walls are covered in blue, white, and gold SandWing tapestries, drawings of Thorn, and to-do lists with half of their items crossed off.[28] There is a small, locked chest next to Sunny's blankets that contains jewelry.[29]

There are multiple underground lakes in Jade Mountain.[30] The largest underground lake[30] Turtle took Moonwatcher to is deep inside the mountain,[31] and as of Escaping Peril, the SeaWing students have made the space their exclusive clubhouse and are there quite frequently.[6] It sits in the middle of a huge cavern studded with stalactites, with a hole big enough for dragons to fly through at the top.[32] The moons are visible through the hole, which casts silvery-green light throughout the cavern.[32]

The weapons cave contains a single wooden box in the middle of a stone floor. The box contains three knives, one dagger, and a large, heavy stick.[33]

The epilogue featured the founding of the school.

Jade Mountain Academy was the main setting of the book. During Moonwatcher's time at the school, she meets Darkstalker, who had been trapped under Agate Mountain for centuries. She also came across a murder mystery there and sought to find the dragon who caused an explosion in the history cave. By the end of the book, Moonwatcher and the rest of the Jade Winglet left the school to find Winter's brother.

At the beginning of the book, Winter convinced Turtle to stay back at the academy. He also attempted to convince the rest of the Winglet to go back, but to no avail. After that, the group departed from the academy and started their search.

Queen Ruby visited the academy to perform the SkyWing death ritual for Carnelian. There, Scarlet entered with the seemingly decapitated head of Glory, which turned out to be an enchanted MudWing head. Tsunami, furious, chased after the former queen. Peril, having been present and wanting to stop Scarlet, left the academy with Turtle.

After Darkstalker had been set free by Peril, Turtle went to warn Jade Mountain Academy and Anemone about him. Soon after, Darkstalker arrived and decided spend some time in the main entrance. During his time at the academy, he gave some NightWing students superpowers, like mind reading. Darkstalker eventually left the academy to find the NightWings, to which Turtle followed him.

After watching Turtle and Moon follow Darkstalker, Anemone, and the NightWing students leave Jade Mountain Academy, Qibli and Winter head to history class. During class, Qibli realizes that Ostrich is missing when her Winglet was paired with the Jade and Gold Winglets; with Onyx missing as well. After he provided the teachers with duplicates of his enchanted earring and Sunny located Ostrich in the Scorpion Den, Qibli and Winter left the academy to rescue her from the Talons of Power. The Jade Winglet and Anemone eventually return to Jade Mountain Academy where Snowfall had brought the IceWing army to confront Darkstalker and the NightWings to punish them for trying to wipe them out with a plague. The NightWings and IceWings then fought each other in the Battle of Jade Mountain, during which Anemone tries to trick the NightWings into fleeing, but failed when Darkstalker told them to stay. The battle finally ends when Anemone uses her magic to connect the minds of the NightWings and IceWings and have them understand each other's feelings, after which they are transported to their respective palaces. In the epilogue, Peril is officially the SkyWing of the Jade Winglet; while Turtle and Kinkajou discuss about his writing and her feelings for him.