Wings of Fire Wiki
Register
Don't have an account?
Sign In
Advertisement
in: Characters, Females, Dragons,
and 5 more
English

"Oh my gosh, Mom, seriously! I am TRYING to be MENACING AND MYSTERIOUS. Could you be quiet for ONE SECOND while I handle this?"
— Jewel to Scarab, The Hive Queen

(Not to be confused with Jewel, one of Clearsight's dragonets.)

Jewel is an adult female HiveWing who was introduced in The Hive Queen. She is the ruler of Jewel Hive and the daughter of Scarab. She is one of the least tyrannical Hive rulers.

Jewel has bright golden scales, with thin lines of black scales outlining her iridescent green eyes and dotting her cheekbones, and more black lines tracing the veins in her wings. She is tall and angular, with gold earrings shaped like beetles and a necklace of onyx stingers. Her claws are each painted with perfect lines of black and gold.[1]

Wasp considers Jewel as a "harmless idiot," and is often overlooked by others. There is even a running joke about Jewel being illiterate among the Hives. A SilkWing prisoner once stated that Jewel is fair, and described her as the only leader of the Hives that can be trusted.[2]

According to Cricket, Jewel is fascinated with art.[3] She also has an art scene located at the Jewel Hive and is known to be the most relaxed with Hive security, which usually results in a disorderly Hive. She seems to be far kinder than most of her relatives, as shown in her actions, and in that Scarab believed that she would protect Cricket and Katydid from Wasp.[4] Jewel heavily dislikes Wasp; once, Cinnabar and Tau joked that Jewel would give them a medal any time Wasp gave her orders to punish them.[5] She helped Cricket escape from prison, and most likely has helped others that Wasp had imprisoned in Jewel Hive's prison. Jewel is not subjective to Wasp's mind-control, and she ordered the library in Jewel Hive to be built and filled it with history books, hoping that some of the citizens of Jewel Hive would see through the HiveWing lies. Jewel is also a reader herself despite the rumors saying otherwise.

Jewel was mentioned several times as the ruler of Jewel Hive and cousin of Queen Wasp.

After Cricket was captured by Wasp, she awoke in the Jewel Hive prison with Jewel and Scarab watching her. Jewel was understanding of Cricket's actions and consequences and decided to help Cricket escape from her own prison.

Jewel came into her kitchen and retold Cinnabar's message about the current events. She, Tau, and Scarab discussed how to warn all the SilkWings and Jewel wanted to take the HiveWing eggs. Scarab objected because the eggs were already infected causing Jewel to worry about her children. Sensing her pain, Scarab calmed Jewel down. Afterward, Jewel hurried out murmuring lists of tasks to herself.

Through Blue's eyes, Wasp found Jewel had disappeared with Scarab and the rest of the SilkWings from Jewel Hive and commented that she should have killed Jewel and Scarab a long time ago.

Cricket and Jewel met briefly when Cricket was captured by HiveWings under Wasp's control. Jewel freed Cricket from her prison, in exchange for spying on Wasp. Jewel most likely found out what Wasp was doing with the eggs from Tau and tried to stop Wasp.

While Scarab is Jewel's mother, Jewel tends to find her annoying and unpredictable. Scarab often makes remarks about Jewel's attitude and how she runs her Hive and the care of her dragonets. In a mere conversation between them and Cricket, Scarab's biting comments about her daughter and Cricket irritated Jewel to the point of losing her composure several times. However, Scarab seems to truly care about Jewel and gives her advice no matter what.

Jewel and Wasp don't get along. Wasp thinks her cousin is weak and stupid, and Jewel despises Wasp in return for being selfish and cruel. Jewel does not trust Wasp, going so far as to send Cricket to spy on her. It is implied that this suspicion is mutual, and Scarab mentions that two of Jewel's guards are most likely spying on her for the queen.

"Do you know how hard it is to get paint out of treestuff? I'm going to have pink smudges all over my Hive forever now."
― to Cricket, after her, Blue and Sundew's vandalism of Jewel Hive (The Hive Queen, page 219)

"THEY ARE N — this is not productive."
― to Scarab after she tells her that her dragonets are a mess (The Hive Queen, page 226)

"Oh my gosh, Mom, seriously! I am TRYING to be MENACING AND MYSTERIOUS. Could you be quiet for ONE SECOND while I handle this?"
― to Scarab (The Hive Queen, page 220)

"You may not have noticed, but somehow I manage to be a VERY GOOD HIVE RULER even - I would say especially when you and your advice are on the other side of the continent!"
― to Scarab (The Hive Queen, page 220)

"Well, I would like you to stay in charge of your own brain, as annoying as that brain is Mother. So I would appreciate it if you could not go thumping the queen of our tribe anytime soon."
― to Scarab (The Hive Queen, page 224)

"I can't let you out, little dragonet, as much as I might be tempted to. Queen Wasp would punish my guards most severely, and they are loyal to me when their minds are their own. They don't deserve that."
― to Cricket (The Hive Queen, page 225)

"Not NOW, Mother. Cinnabar said to bring everyone to Lake Scorpion. There's somewhere we can go from there, she said, but we have to all go together. We need messengers to check every level of the Hive. Someone to go to the webs. Dragons to carry the cocoons of any SilkWings in Metamorphosis right now, others to carry all the SilkWing and HiveWing eggs in the Hatcheries."
― to Scarab (The Dangerous Gift, page 121-122) 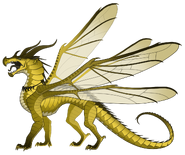