Wings of Fire Wiki
Register
Don't have an account?
Sign In
Advertisement
in: Characters, Females, HiveWings,
and 5 more
English

"No! Of course not. I don't know why. But why doesn't matter — what matters is how to protect you so no one realizes it doesn't work on you. You'll have to stay alert for when it happens. We'll find places for you to hide. The good news is she doesn't do it often. I'll keep you safe, Cricket, I promise."
— Katydid to Cricket about Wasp's mind-control, The Hive Queen

Stingers in claws or tail

Katydid is an adult female HiveWing who was introduced in The Lost Continent. She is Cricket's mother, the former partner of Malachite, and the daughter of Cadelle. She currently resides in Cicada Hive.

Katydid has a kind face[1] and yellow-orange scales that are freckled with black spots.[2]

Katydid is often sad,[3] but cares deeply for her daughter. Katydid is also protective, as she kept Cricket's secret from her mother and father. She is willing to do most of the housework and is shown to keep her promises, as she took Cricket to the eye doctor to get her glasses when she was three.

Though Katydid is her daughter, the two did not seem to have a loving relationship with one another. The two grew more distant after Cricket's hatching, with Cadelle moving away from them to avoid punishment.

Katydid is Cricket's mother, and she and Cricket share almost everything with one another.[4] Katydid is the only dragon Cricket loved before escaping Cicada Hive with Blue, and Katydid was the only one of their family who took care of Cricket. Cricket looks forward to seeing her mother, as she is kind to her.[5]

Malachite was Katydid's partner. Queen Wasp forbade their marriage before she took Malachite away and before he knew Cricket existed. Malachite now serves directly under Queen Wasp and is kept under constant mind-control.

Katydid and Lady Scarab have an odd relationship. It is implied that Scarab helped Katydid to get revenge on Wasp, but it seems that deep down, Scarab cares about Katydid, actively defending her from Wasp's soldiers.

"The queen has been mind-hopping all over the Hives, looking for clues about you. I'm afraid she must have figured out she can't get into your head."
― to Cricket about Queen Wasp looking for her (The Hive Queen, page 111)

"I think you're exaggerating a little. Let's talk about this somewhere safer."
― to Cricket about talking about Queen Wasp (The Hive Queen, page 112) 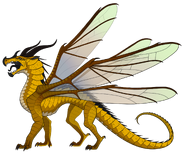