Wings of Fire Wiki
Register
Don't have an account?
Sign In
Advertisement
in: Characters, Females, SkyWings,
and 17 more
English

"I am the way life has made me. Take it or leave it."
— Kestrel to Peril, The Dragonet Prophecy

Over 20 years at death

Member of the Talons of Peace,

Guardian of the dragonets of destiny

Kestrel was an adult female SkyWing who was introduced in The Dragonet Prophecy. Formerly a member of the Talons of Peace, she was one of the guardians of the dragonets, tasked with teaching tribe strengths and weaknesses,[1] alongside Dune and Webs. She was killed by Blister when the SandWing stabbed her in the heart with her tail barb.

During her imprisonment in Scarlet's palace, her talons became blunt, and her scales became scraped and chipped.[17]

Kestrel was mean,[8] grumpy,[18] aggressive,[2] and insensitive.[4] She yelled a lot,[1] and was mentioned to hate everything.[19] She would often punish the dragonets of destiny by taking away all of their cave's torches.[20] She was initially assumed to be cruel and naturally hostile, but was later revealed that this was because she was bitter about being lied to and losing both her dragonets. She abused Glory due to her being a RainWing and not a "powerful" SkyWing. Kestrel seemed to hate all of the dragonets of destiny and was excessively hostile towards them; she herself seemed to be a core reason the dragonets loathed life underground, as brought up many times later on in the books on how Kestrel treats them. However, Kestrel seemed to have a protective side, which was shown when Morrowseer and Blister tricked her into believing that the dragonets were in danger. She arrived immediately to 'save' them, hinting she had some protectiveness over the dragonets.

Clay was often the one to be picked out of all the dragonets to learn how to fight because of his ability to breathe fire and his size. Kestrel expected Clay to be the dragonet who supposedly tried to "kill" the other dragonets of destiny during hatching, and often used this as an excuse for expecting Clay to win every fight. Kestrel was shown often visibly disappointed in Clay, loathing how he did not use his "inner monster" to help him fight like a SkyWing.

Clay did not think of Kestrel quite as strongly as the other dragonets, but it was revealed that he thought of her as hot-tempered and mean when he stops an argument by saying that they are "mini-Kestrels."

Dune helped Kestrel and Webs raise the dragonets of destiny while hidden in the caves. Kestrel seemed to be neutral with him, and tolerated his strict and slightly rough personality.

Kestrel never liked Glory, and claimed she never would,[21] a feeling that Glory shares.[22] Her hatred stemmed from the fact that originally they were supposed to get a SkyWing egg for the prophecy, however they had to use Glory's egg as a replacement. Kestrel did not like RainWings in general and saw them as "wretched creatures," and "nothing like SkyWings."[5] She would often verbally abuse Glory by calling her "lazy" and using "lazy RainWing" as an insult to her and her friends.[2][23] She, along with Dune, would call her a mistake and growl at her constantly.[18] When Morrowseer ordered the guardians to dispose of Glory she expressed no remorse, and claimed she did not care about the RainWing dragonet.[24]

It is likely that Kestrel cared about her daughter, as she tried to flee with her despite getting burned. When she found out Peril was alive, she told her, "I thought you were dead." In addition to that, after Glory injured Queen Scarlet, she invited Peril to come with her. However, Peril declined, ending their relationship, due to Kestrel supposedly "killing" Peril's brother and abandoning her with Scarlet, and Kestrel was killed shortly afterward. Despite her grudge against Kestrel, Peril was devastated upon learning of Kestrel's death, since she never got the chance to know her mother well.

Initially, Kestrel appeared to respect Scarlet, but also be a bit fearful of her – she was one of Queen Scarlet's most loyal soldiers, but Scarlet ordered her guards to attack her, forcing Kestrel to flee for her life. Kestrel hated the queen much afterwards for lying to her and forcing her to lose her dragonets.

Kestrel seemed to care about Sky before his supposed "death" in Dragonslayer when Kestrel roared and flew over the river, looking for Sky. However, this might have been her searching for confirmation of his death rather than his life, showing that she did not care if he was dead, though it might have been an act, as Queen Scarlet was likely watching. After failing to locate her son, Kestrel believed Sky had perished. Kestrel never learned that her son is still alive and well. The loss of her dragonets also prompted Kestrel to take her anger out on the dragonets of destiny.

Chameleon was Kestrel's partner when he was in his SkyWing form, Soar. They had an egg with twins in them, but they never saw each other again after the latter.

Kestrel would often insult Starflight just like all the other dragonets, likely because he could not and did not want to fight.

Kestrel seemed to dislike Sunny the least. The optimistic dragonet was most likely treated better by the guardians, including Kestrel. However, Kestrel called Sunny "defective."[25] Sunny cried after learning of Kestrel's death.[15]

Tsunami heavily dislikes Kestrel,[22][26] and Kestrel felt the same way. Kestrel severely punished Tsunami to the point of chaining her up when she disobeyed an order. Kestrel seemed to consider Tsunami the strongest out of the dragonets, as she said that the SeaWing was the only one who could have stopped her from killing Glory.

Webs helped Kestrel and Dune raise the dragonets of destiny while hidden in the caves. Kestrel seemed to be neutral with him, like Dune. In The Dragonet Prophecy (graphic novel), she is shown to yell at Webs for bringing a RainWing egg instead of a SkyWing egg repeatedly, but it was only thanks to her suggestion that Webs managed to escape Queen Scarlet's attack in the caves.

"Of all the horrible ideas. RainWings are wretched creatures. Nothing like SkyWings."
― about Webs' plan to replace the broken SkyWing egg with a RainWing egg (The Dragonet Prophecy, prologue)

"I'm your teacher. Nothing I do is cheating. Get down here and fight like a SkyWing."
― to Clay, after stomping on his tail (The Dragonet Prophecy, page 3)

"STOP YAMMERING AND GET DOWN HERE!"
― to Clay (The Dragonet Prophecy, page 3)

"Where's the monster I saw when you hatched? That's the dragon we need for the prophecy."
― to Clay (The Dragonet Prophecy, page 4)

"Aren't you sweet? Protecting a dragon who tried to kill you while you were still an egg."
― to Tsunami, about her protecting Clay (The Dragonet Prophecy, page 5)

"We'll tell you what you need to know about the prophecy, […] You don't need a pile of gossip and rumors and speculation cluttering up your tiny little minds."
― to Sunny and Starflight (The Dark Secret, page 92) 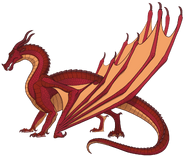