"Perhaps there's a way to reach a diplomatic accord. Maybe by dividing the Kingdom of Sand among the three of you, for instance."
—Gill to Blister, Assassin

At least 22 years at death

The Dragonet Prophecy, The Dark Secret (in Tsunami's dream), Talons of Power, Assassin

The Lost Heir, The Brightest Night

King Gill was an adult male SeaWing who ruled alongside his mate, Queen Coral, until his capture by the SkyWings during the War of SandWing Succession.

After having been deprived of water for a long time by Scarlet, he was killed by his daughter, Princess Tsunami, during a battle at the SkyWing Arena.

King Gill was a large, powerful SeaWing with pea-green scales[2] and, according to Coral, had brave, dark green eyes.[3] His claws were curved and sharp, like fish hooks.[3] He was twice the size of Tsunami,[3] and he wore gold bands around his wrists. In Queen Scarlet's arena, he was driven mad from lack of water as punishment for a prisoner revolution he had attempted to start. As a result, his eyes were bloodshot and hooded, his tongue swollen and purple, and he looked skinny and completely dehydrated, as if someone had left him sleeping in the middle of the desert for three years. His snout was flecked with blood, and he may have tried to drink from his own veins. According to Clay, he looked completely insane.

Little is known about Gill's personality, although Coral remembered him as 'being the perfect king', describing him to be smart, strong, persuasive, gentle, and of a noble family. However, she did think of Whirlpool as a perfect future king, too, which may mean this description is inaccurate. In Assassin, he is shown to be a good king, wanting to compromise rather than fight to end the War of SandWing Succession. He was said to have a way with words, such as when he was able to convince prisoners to stop fighting in Scarlet's arena. Gill was said to have adored Coral's writing.[4]

He also seemed to care about SeaWing princesses very much, as he was devastated and furious when two of the female eggs were smashed in the prologue of Talons of Power. Though reasonable as he is, he was also prone to jumping to conclusions. This was shown when he blamed Turtle for not finding Snapper in time, but never had the chance to apologize when the truth came out.

Gill had a loving relationship with Coral during his life. She thought highly of Gill, and also wrote a scroll on why she chose him. Coral knew he was trustworthy, and wanted him to run the kingdom while she stayed with her egg. Gill said he would do anything for her.

He was angry at Turtle for not finding Snapper in time, which resulted in his daughters' deaths. Gill was resentful of his son from the incident, but was sorry to have found out Snapper went off. According to Queen Coral, Gill forgave Turtle for the incident when he was a dragonet, but he never got to tell Turtle before his death.

Abalone was a good friend of Gill's. When he was inflicted with a growing tumor, Gill sought help quickly for him.

Tempest appeared to have a relationship with Gill, as he sobbed heavily when she died.

"Yes. We're starting to wonder if this war is really worth it for anyone involved, [...] Perhaps there's a way to reach a diplomatic accord. Maybe by dividing the Kingdom of Sand among the three of you, for instance."
— to Blister (Assassin)

"What are we going to do without her?"
— mourning Commander Tempest (Assassin)

"All right, stay here. Watch the eggs and don't fall asleep. I'll grab someone and send for help."
— to Abalone in Aquatic (Talons of Power, prologue)

"You shouldn't volunteer for things you're incapable of doing, [...] You shouldn't offer to help if you're going to be useless."
— to Turtle (Talons of Power, prologue)

"I sent him for help, and instead he flapped around looking in all the wrong places and goofing off."
— about Turtle (Talons of Power, prologue) 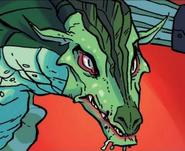 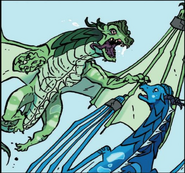 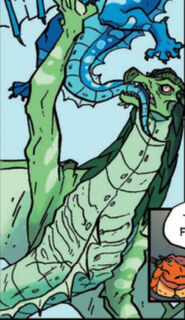