Kingdom of the Sea

The Kingdom of the Sea is the home of the SeaWings. It is mostly made up of small islands forming a group of islands called the Bay of a Thousand Scales. It holds two palaces; the Deep Palace and the destroyed Summer Palace, and once had the Island Palace in the time of Darkstalker. As of the end of Darkness of Dragons, another palace is under construction.

The Kingdom of the Sea is mainly aquamarine or blue-green[1] expanses of ocean,[2] with speckled-sand[3] beaches,[4] white beaches,[5] tall sea cliffs and caverns,[5] underwater boulders,[6] coral reefs,[7] kelp forests, underwater caves,[8] sandy bottoms, peninsulas, and deep trenches. Rocky, sandy, or tropical wooded islands are spread out throughout the kingdom. The climate is warm, tropical, and rainy, and smells like wild, salty[3] sea air.[4] Some of the beaches are lined with dark foliage,[4] and mountains are visible in the distance.[9] On the border with the Sky Kingdom, there are sea cliffs, and the water is presumably colder in that area. The border with the Mud Kingdom is a sandy beach separating the sea from an area of forest. It contains several jungles[10] above water, and near the Deep Palace, there are lines of canyons[11] and trenches.[12]

Bay of a Thousand Scales

The Bay of a Thousand Scales is a spiral collection of islands that make up the "tail" of Pyrrhia. It is said to have thousands of them, hence the name, making it easy to hide the Summer Palace under a vast canopy. It is a part of the Kingdom of the Sea and is therefore ruled by Coral. Riptide meets the dragonets of destiny in the Bay of a Thousand Scales. Blister's hideout was also located here and is mentioned to be spread across several islands to avoid an attack on the whole army. At the end of Darkness of Dragons, Coral's letter to Turtle said that she was planning to make a reading area on one of the islands and was going to make a palace open to all dragons from every tribe.

The Summer Palace was created by a SeaWing prince named Albatross around 3,011 AS. Albatross grew the twelve-story pavilion out of blue-tinted stone before losing his mind and causing the Royal SeaWing Massacre at the now-abandoned Island Palace. More recently, the Summer Palace was reconfigured for Blister and the SandWings to visit more easily. A canopy hides the Summer Palace, so no other dragon tribe had been able to locate it until the events of The Lost Heir. The idea of camouflaging the palace with plants was Fathom's idea, as mentioned in Darkstalker.

At the end of The Lost Heir, the Summer Palace was discovered by the SkyWings and MudWings after Crocodile secretly followed Webs to the palace. Burn's alliance launched an attack that destroyed the palace, resulting in the SeaWings fleeing to the Deep Palace, where they stayed for the duration of the war. Blister and her army still sent messengers to the ruins to see any sign of her ally.

The Deep Palace is home to the Royal Hatchery and is the Royal SeaWing Family's main headquarters. The palace is built underwater out of coral and stone, in the middle of a canyon.[13] The SeaWings prefer the Deep Palace because it is deep underwater and impossible to reach, stay in, or be attacked by the other dragon tribes. There was a statue of Orca with her talons outstretched benevolently in the wide front entrance of the Royal Hatchery.[13] The statue was then destroyed by Coral when it was discovered by Tsunami to be the mysterious assassin that murdered most of her daughters. One of the palace's wings was set aside for the princes who had survived the murderous statue in the royal hatchery.

Tsunami and the other dragonets of destiny traveled to the Kingdom of the Sea to escape Scarlet and Burn, but to also see Coral and Blister. They stayed in the Summer Palace until it was destroyed by the SkyWings and MudWings. Tsunami helped find the assassin that killed all of Coral's daughters, which turned out to be Orca's statue in the Deep Palace's royal hatchery.

In Turtle's flashbacks, the Talons of Power Ceremony is held in the Island Palace. Turtle later journeys to the Deep Palace, located deep in the oceans of the Kingdom, to warn Coral about Anemone; he later fights Anemone at the Island Palace. It is revealed in the epilogue that Darkstalker sent a spell to the Island Palace, to make the SeaWings believe that Albatross's spirit had come to destroy all the SeaWings for good.

Coral mentioned that Turtle's spell to eliminate the fake Albatross ghost from the Island Palace had worked in her letter to him. She also mentioned that she was planning to build a new palace open to all tribes that will feature an auditorium for dragons to listen to her stories.

All chapters in Part One in Fathom's point of view are set in the Kingdom of the Sea, where eventually the Royal SeaWing Massacre occurred. Due to the massacre, shoreline villages disputed between the SkyWings and SeaWings were abruptly removed.

Tsunami and the Kingdom of Sea on the cover of The Lost Heir, by Joy Ang

Turtle, Anemone, and the Kingdom of Sea on the cover of Talons of Power, by Joy Ang

The Kingdom of Sea on Scholastic Home Base 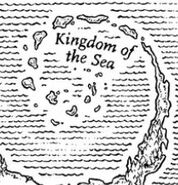 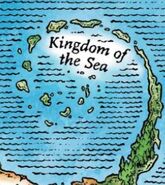