Wings of Fire Wiki
Register
Don't have an account?
Sign In
Advertisement
in: Citations needed, RainWings, Dragonets,
and 16 more
English

"Oh, monkey brains — does this mean I'm the hapless sidekick? Blorg, that is so lame. Better than the wailing victim who needs rescuing, though. Make sure nobody writes me that way when this story becomes an epic poem, alright? And I would definitely like to be the hero next time, please."
— Kinkajou to Turtle, Talons of Power

Captive of the NightWings

Kinkajou is a female RainWing dragonet who was introduced in The Hidden Kingdom. She was previously a captive at the NightWing island, and is currently attending Jade Mountain Academy as a member of the Jade Winglet.

Kinkajou's scales are typically bright colors, such as pink and yellow.[1] She has a long neck,[2] gigantic dark green[3] eyes, and a diamond-shaped snout.[4] She is small.[5]

Kinkajou is snarky,[6] fierce,[7] bright,[8] immature,[9] mischievous,[10] and is quick to anger in difficult situations.[11] She smiles often,[12] but she can become dangerous when her friends are threatened.[13]

Kinkajou dislikes the thought of accepting help from Anemone,[9] and she is often angry with her. Anemone is quite annoyed by Kinkajou.[11]

Bromeliad is Kinkajou's venom trainer, and Kinkajou and Bromeliad appear to have a genuine dislike for each other. She even quotes that "Bromeliad is a slow old baboon," showing her displeasure for her. She once had a dream where Bromeliad was in Mastermind's place, doing experiments on her venom. She later mentioned to Turtle that Bromeliad and Mastermind were the two dragons she hated most and that she must have been stressed lately.

Kinkajou used to believe that Coconut was her good friend and thought that he was helping search for her until she returned from the NightWing island only to realize that Coconut did not notice her disappearance or seemed concerned after finding out. She has attempted to reconstruct their friendship despite this, though he disregards her efforts.

After Kinkajou was healed from Anemone's magic in Talons of Power, Kinkajou and Darkstalker shared a mutual hatred (Kinkajou's abhorrence is more exaggerated, while Darkstalker doesn't take her very seriously, not seeming to pay much attention to her). When Turtle was in the throne room with Darkstalker, Darkstalker enchanted a sword to bring someone Turtle cared for deeply into the room. Kinkajou came in, and when Darkstalker burned Turtle with his fire, Kinkajou spat her venom all over Darkstalker's face. From shock, and in response, Darkstalker slammed Kinkajou down, showing their genuine dislike of each other.

After the events of finding Foeslayer in Darkness of Dragons, Kinkajou used the fragments of Darkstalker's Scroll to turn him into Peacemaker by enchanting a strawberry. Darkstalker wasn't afraid of Kinkajou when he challenges her, but as the enchantment turned him younger and smaller, he realized in shock that he'd been beaten by a "ball of fluff."

Kinkajou was introduced in The Hidden Kingdom alongside Tamarin, Jambu, Orchid, Bromeliad, Coconut, and Mangrove. She proved to be fierce and helpful while helping Glory escape the Night Kingdom, though she hit a NightWing with the blunt end of a spear. She views Glory as a role model, and it is shown that Queen Glory thinks of Kinkajou as a friend rather than a subject.[14] She also didn't hesitate to find a blood relative to Ex-Queen Grandeur to save Kinkajou from an accidental venom strike. She's one of Kinkajou's closest friends, and Kinkajou thinks of her as her "awesome queen." She is fiercely loyal to her, attacking Icicle when Icicle was plotting to murder Glory. She also sometimes brags about having Glory as a friend.[15] She is one of Glory's favorite subjects,[16] and Kinkajou considers herself to be Glory's best friend.[8]

Moon and Kinkajou are very close friends, and they get along pretty well, as shown several times in the second arc. Kinkajou also tends to think Moon likes other dragons better than her. She treats Moonwatcher like a best friend.[17] Kinkajou used to hold a slight grudge against her since she was a NightWing, but after Moon told her about Secretkeeper hiding her egg in the rainforest, they've been best friends ever since. In Darkness of Dragons, Anemone mentioned that Darkstalker wouldn't hurt a scale on Kinkajou's head because she was her best friend.

Qibli was very relieved to see that Kinkajou was all right, and she beamed at him after thwarting Chameleon.[8] He once greeted Kinkajou by giving her a giant hug.[18]

Kinkajou and Tamarin are good friends. Kinkajou doesn't dwell on her blindness, and when telling someone about Tamarin, it's not the first thing she says. Kinkajou has a strong belief in Tamarin's abilities, as shown during the flower hunt portion of the RainWing Royal Challenge.

At the end of Talons of Power, Kinkajou says that she loves Turtle, unknown she was under a spell. Turtle then sadly replies that it was only a spell and she didn't really love him.[19] At the end of Darkness of Dragons, the love spell is removed. Kinkajou returned to her normal feelings of him as one of her best friends. Anemone's spell enchanted Kinkajou to believe that Turtle was handsome, brave, and noble, but Kinkajou was aware that these feelings were a result of the spell and was quite angry towards Anemone and towards herself.[20] Turtle has an enormous crush on her,[21] and after not mentioning the spell for about a month after Anemone released Kinkajou from it, Turtle admitted that he still had feelings for her.[22] Kinkajou likes him too, but confessed that it was confusing having to go through enchanted emotions.[22] Kinkajou wants to keep spending time with him in order to sort out her feelings, but she thinks he is adorable. She once twined her tail around Turtle's and glared at Anemone, as though to say that she would be doing it even without the love spell.[23]

Kinkajou considers Winter to be her friend, though Winter originally did not appear to acknowledge her existence. Throughout Moon Rising, Kinkajou was shown to admire his "sparkly scales" as noted by Moon; however, he does not seem to notice. In Winter Turning, she showed multiple acts of kindness, none of which Winter cared about. During the epilogue of Darkness of Dragons, Winter and Kinkajou talked to each other about the aftermaths of the events of Darkness of Dragons, and they both consider each other friends. Winter noted that he does not want Kinkajou dead.[24]

"Don't worry, I know you can't talk. I'm the only one without a gag. They decided my venom wasn't strong enough or I couldn't shoot far enough to be dangerous, or something, I guess, which is a little unfair because if someone just train me properly, I think I'd be super-great at it and then these horrible dragons would be super-sorry for putting me in a cage."
― to Glory about the NightWings (The Hidden Kingdom, page 179)

"Isn't this exciting? I'm so excited I can hardly STAND IT. That's why I'm this color, by the way. I have been trying all morning to turn myself something more dignified and I can't do it; my scales are all like, YAY WE'RE REALLY HERE! and will not listen to me."
― to Moon about school (Moon Rising, page 23)

"I love this place. Have you explored at all yet? There's the most amazing library - not that I can read yet, but oh my gosh, I'm working on it really hard. And an art cave! It's full of all these colors of paint, like, like, like a couple of RainWings just EMOTED all over it! You guys, we should make amazing paintings and then decorate our cave with them. WOULDN'T THAT BE AMAZING?"
― to Carnelian and Moonwatcher, about Jade Mountain Academy (Moon Rising, page 23-24)

"Look at her! I'm sure she'd love to be called Friendly."
― to Moonwatcher, about Carnelian (Moon Rising, page 25)

"Ooooo. How does it feel to be related to someone famous? Probably a bit like being best friends with a queen. Which I am, just incidentally, so, I mean, I totally get it!"
― to Sora (Moon Rising, page 33)

"I say anyone who is gross enough to eat something that's alive and wriggling deserves to get pecked. You should take those dragons out hunting with you and leave the rest of us here to enjoy our quiet sensible fruit in peace."
― to Clay (Moon Rising, page 38)

"It's MORNING! Isn't that WONDERFUL?"
― to Moonwatcher (Moon Rising, page 70)

"Qibli told me what happened. I can't believe I missed it all! I can't believe I wasn't there to protect you! You're totally heroes, saving us all from bad guys! Although, I'm kind of confused about who's that bad guy and who I should be mad at, because SORA WHAT but also Icicle was totally scary but then SAVING HER BROTHER ACK so I get it but still, attacking my winglet! My best friend! Not OK!"
― to Moonwatcher (Moon Rising, page 282)

"He looks like he's posing for a portrait. Pompous Sneerdagard the Magnificent Awaits His Legions of Doomed Enemies."
― to Turtle, about Darkstalker (Talons of Power, page 174)

"No way! Queen Glory is perfect. I want her to be my queen forever and always."
― to Turtle (Talons of Power, page 187)

"Oh, monkey brains — does this mean I'm the hapless sidekick? Blorg, that is so lame. Better than the wailing victim who needs rescuing, though. Make sure nobody writes me that way when this story becomes an epic poem, alright? And I would definitely like to be the hero next time, please."
― to Turtle (Talons of Power, page 281)

"He sure did. I owe that guy a few broken bones and a coma."
― to Turtle, about Shapeshifter (Darkness of Dragons, page 227)

"I was being a detective! I was being super observant! I mean, OK, I missed the part about how he was actually the exact same dragon, but I did notice the matching treasure. I just thought the MudWing handed over all his jewelry for some reason. It's not like that makes less sense than 'he shapeshifted into a whole other tribe of dragon.'"
― to Qibli, about Chameleon (Darkness of Dragons, page 229)

Kinkajou from The Hidden Kingdom (graphic novel), by Mike Holmes 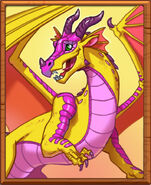 Kinkajou's icon from Speed Wings, a minigame on Scholastic HomeBase
Art by Mike Holmes, from the Wings of Fire Graphic Novels