(This is the page for the languages. You may be looking for "Dragons," or Undauntable's cat known as "Dragon" instead.)

There are different languages spoken by the creatures in the Wings of Fire universe.

Dragon, or Dragonspeak, is the language spoken by Pyrrhian dragons, and later by Pantalans as well. It was formally named in The Lost Continent.

There is an old language as well, but the name of the old language is unknown. In the prologue of The Lost Continent, when Clearsight arrives, it is stated that the Pantalan dragons speak the old language, and only a few of them speak Dragon. As Luna and Jerboa could understand each other, it is confirmed that modern Pantalans speak Dragon.

Wren is a scavenger known to speak Dragon, which she uses to communicate with Sky, her dragon friend. She later teaches Rose and Daffodil how to speak Dragon. According to her, the written language of Dragon has the appearance of a bunch of fire, claw, and moon symbols.[1]

Aquatic is the secret language used by SeaWings to communicate underwater. Instead of spoken words, Aquatic uses a series of talon gestures and the flashing of the bioluminescent stripes along the SeaWing's body. Due to the fact that only SeaWings possess these stripes, the language is not spoken by dragons from any other tribe. Tsunami is a rare case of a SeaWing who does not understand Aquatic very well at all, being raised in a cave by the Talons of Peace. Whirlpool taught Aquatic to Tsunami by having her copy him lighting up her bioluminescent stripes. The way Riptide taught Tsunami was by showing her simple words and phrases and having her copy them. 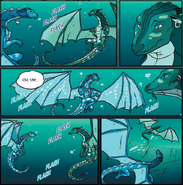 Whirlpool speaking to Tsunami in the Aquatic class 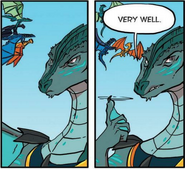 Pantalan was the original language spoken by the residents on the continent of Pantala. It appears that most words are based on plant parts. The language is not used in modern Pantala anymore, as Clearsight taught the Pantalan dragons how to speak Dragon.

Human is the language spoken by scavengers. From a dragon's perspective, Human sounds like squeaking and chirping noises,[5] while Dragon sounds like growling and roaring nonsense to humans.[6] Sky is the only dragon known to speak Human partially.

Community content is available under CC-BY-SA unless otherwise noted.