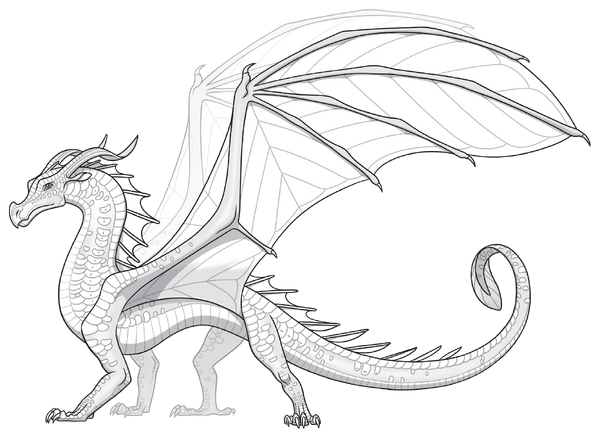 LeafWings are one of the three tribes, alongside SilkWings and HiveWings, that inhabit the continent of Pantala. They are the only living tribe that was mentioned in the Legend of the Hive. They typically have green and brown scales, with some accent colors such as gold and red. They have distinctive leaf-shaped wings. It is rumored that LeafWings can absorb sunlight, and most are accomplished gardeners. Some are rumored to have a strange control over plants, an allusion to the tribe's special leafspeak abilities. Before the Tree Wars, the LeafWings were ruled by Queen Sequoia.

In The Lost Continent, the LeafWings were believed by the SilkWings and most of the HiveWings to have been exterminated during the Tree Wars. Many of the Hives are filled with propaganda posters depicting LeafWings as vicious, cruel, and terrifying. Queen Wasp antagonized them so much that most of the trees, believed to be symbolic of the LeafWings, were destroyed after the Tree Wars, and trees were banned by HiveWing law from being included in artwork.

In The Hive Queen, Sundew stated that the PoisonWings were planning to restart the Tree Wars, and that the surviving LeafWings currently live in the Poison Jungle. They began their mission by burning Bloodworm Hive.

By the end of The Flames of Hope, most of the LeafWings have gone to live in the LeafSilk Kingdom.

LeafWings can be various shades of green and brown, even to the point of being nearly black in color.[1] They can also sometimes have golden or pink-ish red streaks over their bodies and wings.[2] They also have webbed spines along their neck and back, similar to a SeaWing. The webbing along their back splits into individual pieces near the base of the tail, which are shaped like leaves. Their snout is slightly curved, with a raised ridge on the tip of their snout.

LeafWings have a flat, plated tail, ending in a leaf-shaped oval at the tip. Their wings are leaf-like, playing directly into their name-sake. They're also slightly transparent, with veins in the webbing and rounded edges. Their horns appear to be skinny and flat-ended, and the scales above their eyes go over the top of their horns, giving it a partially plated look.

Their scales are uneven, vaguely resembling chloroplasts and plant cells. They have a plated underbelly and a slender body shape. Their legs seem to be slightly short and thin. Their eyes can be green or brown.

The PoisonWings have been seen carrying leaf or grass pouches containing deadly plants and insects.[3] These pouches are attached to the dragon's body with harnesses made out of vines, leaves, or grass.[4]

LeafWings are omnivores. The sun gives them energy, allowing them to eat infrequently.[event 1] They consume animals in the Poison Jungle, such as panthers and capybaras, and fruit such as mangoes. LeafWings also consume bugs such as grasshoppers and snails, usually as a snack or treat. They have also been confirmed as somewhat autotrophic. Sundew feeds Bumblebee mangoes, capybara, and snails,[5] which shows that LeafWings are omnivorous. Sundew also ate a bowl of taro and sugared grasshoppers, which may imply that some LeafWings can cook. LeafWings eat chocolate.[6] LeafWings also have some method of cooking food.

LeafWings can absorb energy from sunlight, similar to RainWings, and are accomplished gardeners.[7] They may possess leafspeak, which allows dragons to talk to plants. Leafspeakers may convince plants to grow at an accelerated rate,[8] or in a certain way,[9] or convince the plant to attack a specific target, though they cannot produce them from nothing.[10] As leafspeak is genetic, selective breeding may be employed to achieve stronger leafspeak abilities; two leafspeakers may produce a dragonet with stronger leafspeak than either of them.[11]

Most LeafWings appear to have exceptional knowledge over plants and insects, using bugs and plants as weapons against other dragons.[12] Some LeafWings can swim.[13]

After the events of the Tree Wars, the tribe split into two groups, half staying loyal to Queen Sequoia and wanting to lay low and isolate themselves until Wasp's death, the other half united under Sundew's grandmother and swearing revenge against the HiveWings for destroying their trees.[14] Each splinter faction claims to be the "real LeafWings,"[15] calling the others a separate tribe. However, Luna considers the LeafWings as a whole to be the fiercest tribe on Pantala.[16]

The violent LeafWings were dubbed "PoisonWings" by the isolationists for being needlessly violent and naming their own after dangerous plants. Commander Belladonna is the former ruler of the PoisonWings, though she was formerly controlled by the othermind. She often assigned important missions, including one that ultimately led to the Burning of Bloodworm Hive. She planned for Sundew to marry Mandrake in order to breed more leafspeak dragonets so that they can become part of the PoisonWing community and help fight in war. Until they reached the age of four, they did not know about the "SapWings."

The SapWings are peaceful LeafWings who seek for balance in unity and understanding instead of violence. Queen Sequoia was their former leader. Though the peaceful SapWings were often called spineless and brainless by the PoisonWings, they are shown to be more open-minded than the militaristic PoisonWings and less strict, unlike their rival. Unlike the PoisonWings, they learned about the other half of the tribe in school.

The two factions bear animosity against each other for their methods and ideas, but Sequoia and Commander Belladonna did occasionally hold meetings in secret.

LeafWings were also told that SilkWings were not allowed to go to school.[17]

After Wasp was defeated and replaced by Jewel as queen of the HiveWings, most of the LeafWings went to live in the LeafSilk Kingdom.

Community content is available under CC-BY-SA unless otherwise noted.
Advertisement